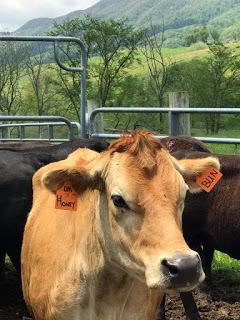 ~ Honey Buns, one of God’s finest Jersey cows ~
(photo by Ashley Fisher)
“He who dwells in the shelter of the Most High will abide in the shadow of the Almighty. I will say
to the LORD, “My refuge and my fortress, my God, in whom I trust.” For He will deliver you from the snare of the fowler and from the deadly pestilence. He will cover you with His pinions, and under His wings you will find refuge; His faithfulness is a shield and buckler. You will not fear the terror of the night, nor the arrow that flies by day…”
~ Psalm 91:1-16 ~
“Opportunity may knock only once but temptation leans on the doorbell.”
~ unknown ~

“…Satan does not tempt us to do wrong things; he tempts us in order to make us lose what God has put into us by regeneration, viz., the possibility of being of value to God.He does not come on the line of tempting us to sin, but on the line of shifting the point of view, and only the Spirit of God can detect this as a temptation of the devil.” ~ Oswald Chambers, Our Utmost for His Highest ~

“Darkness comes. In the middle of it, the future looks blank. The temptation to quit is huge. Don’t. You are in good company…You will argue with yourself that there is no way forward. But with God, nothing is impossible. He has more ropes and ladders and tunnels out of pits than you can conceive. Wait. Pray without ceasing. Hope.” ~ John Piper ~

“No man knows how bad he is till he has tried very hard to be good. A silly idea is current that good people do not know what temptation means. This is an obvious lie. Only those who try to resist temptation know how strong it is. After all, you find out the strength of the German army by fighting against it, not by giving in. You find out the strength of the wind by trying to walk against it, not by lying down. A man who gives in to temptation after five minutes simply does now know what it would have been like an hour later. That is why bad people, in one sense, know very little about badness – they have lived a sheltered life by always giving in. We never find out the strength of the evil impulse inside us until we try to fight it: and Christ, because He was the only man who never yielding to temptation, is also the only man who knows to the full what temptation means – the only complete realist.” ~ C. S. Lewis ~

“For years my wedding ring has done its job. It has led me not into temptation. It has reminded my husband numerous times at parties that it’s time to go home. It has been a source of relief to a dinner companion. It has been a status symbol in the maternity ward.” ~ Erma Bombeck ~

“Temptation is like a knife, it can either cut the meat or the throat of a man; it may be his food or his poison, his exercise or his destruction.” ~ John Owen ~

“Too many Christians have a commitment of convenience. They’ll stay faithful as long as it’s safe and doesn’t involve risk, rejection or criticism. Instead of standing alone in the face of challenge or temptation, they check to see which way their friends are going.” ~ Charles Stanley ~

“Temptation is the devil looking through the key hole.
Yielding is opening the door and inviting him in.”
~ Billy Sunday ~

“…Temptation is not sin, it is the thing we are bound to meet if we are men. Not to be tempted would be to be beneath contempt. Many of us, however, suffer from temptations from which we have no business to suffer, simply because we have refused to let God lift us to a higher plane here we would face temptations of another order.
…Temptation is a suggested short-cut to the realization of the highest at which I am-not towards what I understand as evil, but towards what I understand as good. Temptation is something that completely baffles me for a while, I do not know whether the thing is right or wrong. Temptation yielded to is lust deified, and is a proof that it was timidity that prevented the sin before.
Temptation is not something we may escape, it is essential to the full-orbed life of a man. Beware lest you think you are tempted as no one else is tempted; what you go through is the common inheritance of the race, not something no one ever went through before. God does not save us from temptations; He succours us in the midst of them.” ~ Oswald Chambers, My Utmost for His Highest ~

“We usually know what we can do
but temptation tells us who we are.”
~ Thomas A Kempis ~
“There is no temptation taken you but such as is common to man.”
~ 1 Corinthians 10:13 ~