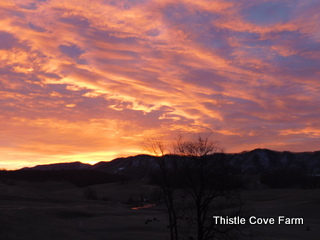 So much has gone on that a lot of it has been forgotten and the (almost) worst of it has been the computer has been on the fritz. As in, I couldn’t access any web sites except those the computer (or Google…let’s not forget Google…) decided I could see. That includes my very own blog which explains no Sabbath Keeping yesterday but today the Good Fairies seem to want to play nice. ??? I’ll take it! 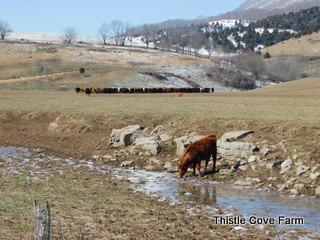 I don’t even pretend to understand! So…if something wonderful has happened in your life, please let me know because, for more than a week, I’ve missed it all. Except for the storm last week. I sure didn’t miss those zero temps with wind chills below zero. I would sleep for three hours then wake up in a tizzy, afraid the pipes were going to freeze, burst, thaw. When awake, I’d feed the wood stove but when asleep, I had nightmares of freezing, bursting, thawing pipes. Seriously, I would wake in a sweat because I was dreaming the ceiling was falling down around my ears just like it did Jan 8! Speaking of…the epic mess is still not fixed. Pipes are still leaking although it’s of absolutely no concern to the insurance rep; he just said, “Oh, that’s a separate issue and has nothing to do with this issue.” 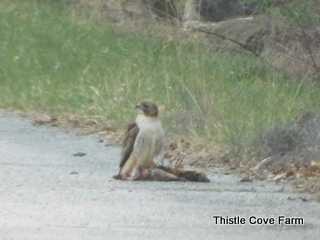 Welllllll…I do not have issues…I’ve got problems, one of which seems to be ignoring the fact an insurance policy is a contract. Anyhoo, I’m still waiting on the heat registers which are on order. The insurance rep “allowed” the exact cost at Home Depot and not a penny more. Yeah. Those registers are doing me a lot of good at Home Depot because not only do they not have them in stock, the insurance rep didn’t allow shipping. I am puzzled, enormously, how those registers are supposed to get here. Is the insurance company responsible for shipping or not? Home Depot assured us the registers would should might be here by mid-May. At the very least, the end of May. Surely. Yeah. We think. wink. If those registers can be found anywhere else, trust me, they’re coming to this farm. No one wants to mess with a cranky, cold senior citizen who knows her rights!


I do know this much…I am well and truly sick of being cold, living in chaos, not being able to get into my closets, having bedroom furniture and clothes strewn in three rooms and a hall, sleeping in sharing a twin bed with Sam P. Spade, still doing laundry of textiles and clothes that were either in the dining room or my bedroom…blah, blah, blah. Three months is long enough to wait…I want to be warm and sleeping in my own bed…NOW! 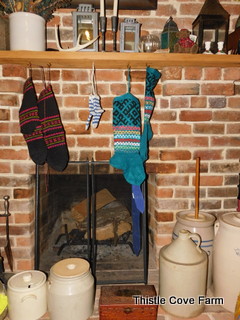 I need to make a run to Duchess Dairy, I’m in need of sweet Jersey cream to churn into butter and buttermilk then to make biscuits, gravy and a lot of other fattening, nice kitchen goodies. The two large churns are both family heirlooms with the largest being from my Grand-Grandmother Delilah via Aunt Bonnie. I learned to churn, make cat head biscuits, apple butter and a lot of other things from Aunt Bonnie and have always had a serious case of heroine worship on her.

Aunt Bonnie kept a Jersey and a Guernsey cow for milk and cream and yes, chickens for eggs and the table. If you’re going to keep milk cows, Jersey and Guernsey are the absolute best. Most commercial dairy herds are Holsteins because of their prolific production; a Holstein produces more milk but of less, much less, quality while a Jersey’s quality is best in the bovine world.

Daddy John and Daniel have been calving…yes, in the nasty, cold, bitter weather. Last week, on the worst day, they had eleven calves born. I was allowed to tag along and took these photos of a calf being born. 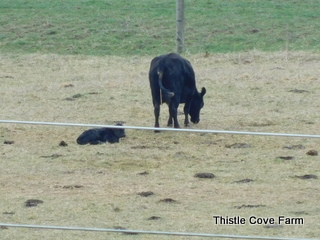 This cow’s water has broken and the small white dot is the calf’s foot. When presented correctly, a calf will come out front feet first. Sometimes, when a cow is in labor, she’ll steal another cow’s calf which is what this cow did. She tagged a calf and followed it around the field, all the while, in labor with her own. Sometimes, a calf will follow a cow in labor and steal milk. The animal world is funny, just like the human world. 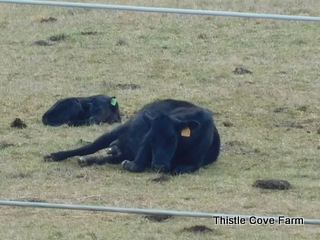 She finally laid down and began pushing only to get up, move around again 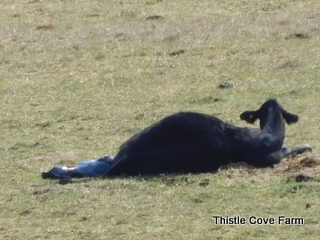 laid down again, the calf is beginning to slip out 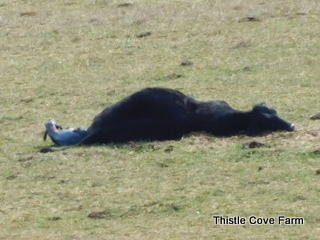 cow is taking a break and you can see the calf raise his head…he’s alive! 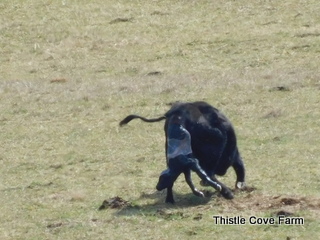 cow clambers to her feet but calf isn’t fully birthed 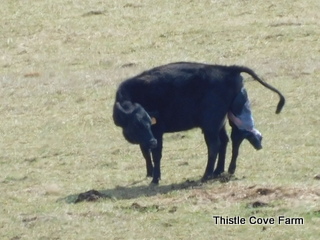 this is where it got funny… 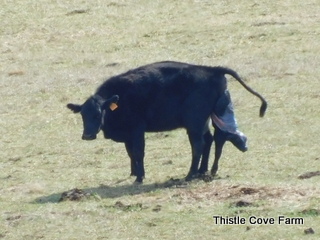 the cow began walking around, poor little calf still caught half out, half in 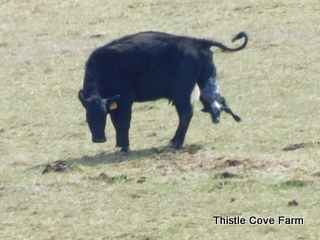 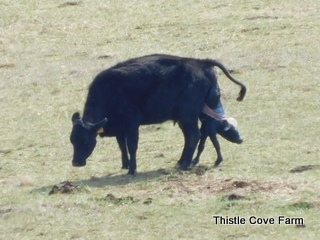 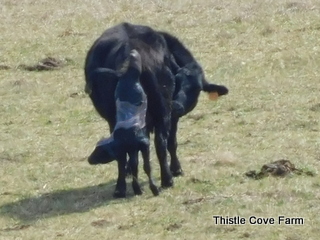 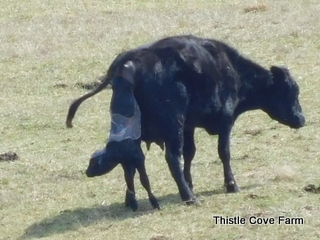 and…suddenly! slips out onto the ground 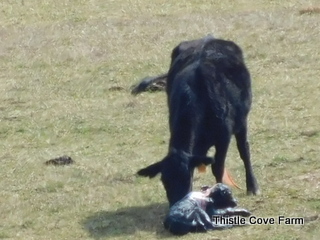 proud cow turns and begins licking the afterbirth and in a few minutes, the calf wobbled to his feet and began nursing. 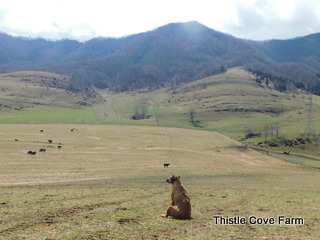 Sadie, watching over the Peaceable Kingdom, is enthralled with the cow herd and with the idea Spring is here, so says the calendar. The old timers said whatever weather was on the first day of Spring is what we’d have the rest of the quarter. Please God, let it be so! It’s been warmish today, a tot of rain and mostly sun. I’ve done seven loads of laundry, a bit of house cleaning, some re-arranging which means I’m, slowly but surely, putting furniture back in rooms where they belong. Yes, by myself. Don’t ask.

Ponder this ~ conduct is the best guide to character ~