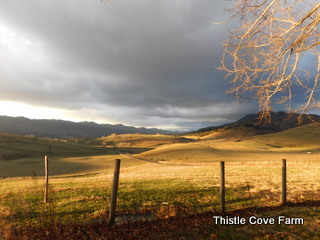 As we slide toward January’s closing, a few photos to give you a glimpse of Heaven on earth. The above is similar to the header photo; the valley view I see daily and it’s always fresh and new. 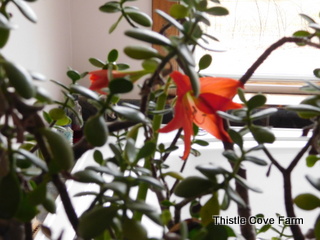 A volunteer among the Jade plant; the amaryllis came from…? I haven’t any idea but it’s a lovely, unexpected surprise. 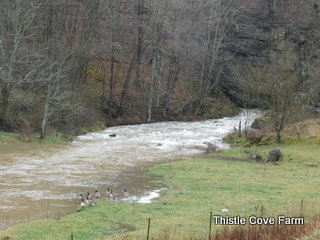 Maiden Spring is absolutely roiling; I’ve not seen it this full in some years. Please note although road signs says “Maiden Springs” there is but one spring, no more. When I pointed this out to a VDOT employee, I was told, “Well, it’ll cost to much to change everything so we won’t.” I have a hunch this error was made due to the VDOT sign that references the fort that was nearby. That sign says, “Maiden Springs Fort…” and thus the error continues. The fort was established by Reese Bowen, an umpty-umpth grandfather of Dave’s, and garrisoned in Dunnmore’s War in 1774. Dave’s mother always told the story of one of her umpty-umpth Grandfather, c. 1750 who, while on a hunting expedition, saw a maiden deer drinking from the spring and thus the name. She always claimed her kin were the first settlers while I always claimed they were the second as the Shawnee were the first…rightfully. We never agreed to disagree…lol. 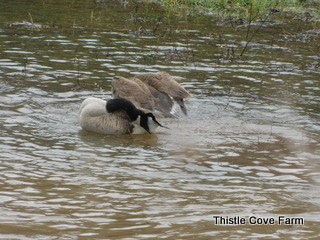 Whenever I cross the mountain to buy groceries or gasoline, I pass by Maiden Spring, sometimes seeing deer, cattle and, on this day, Canada geese. 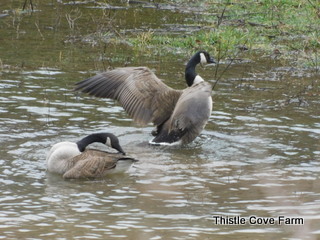 Pulling the car to the side of the road, I visited for a while and enjoyed watching them perform their ablutions. 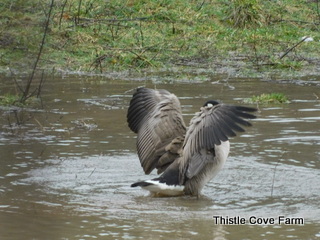 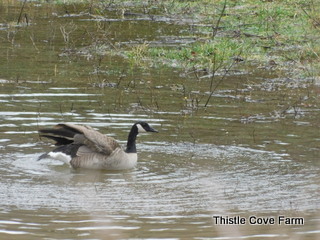 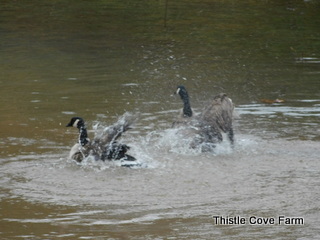 There were dozens, both sides of the creek, making huge splashes and talking loudly to each other. It was easy to hear them over the roar of the water. 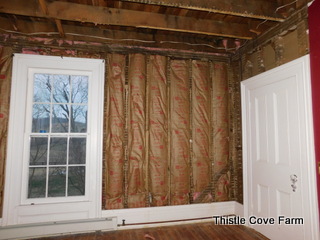 If you’re curious as to how the house restoration is going…it’s going slowly. Low temps (in the 20’s F) and high winds mean the house is cold. Thursday I caved and Eddie and I went to Lowe’s where I purchased enough insulation to cover the outside walls. 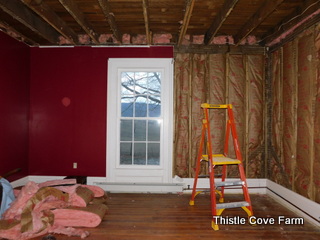 I’d already purchased two heaters built to heat 1,000 square feet to knock the edge off the cold. Both rooms are about 18×18 feet so knocking the edge off is a very good thing…especially at night while sleeping because the bedroom has no heat save that little heater. The other heater is for the upstairs bathroom which is much less expensive than more frozen pipes.

Now I’m searching for radiators for the bedroom but so many people are going to heat pumps (UGH!) the call for radiators is minimal. I’ve made inquiries (thanks Ashley!) of two separate folks who might have the old fashioned radiators and might be willing to sell me a couple. Someone else (thanks John!) told me the people who make those outside wood stoves also deal in radiators.

Earlier this week, I spoke with a man who deals in Persian carpets and rugs; we made an appointment for me to take my (ruined) rug to him for evaluation. When that day dawned, it was snowing and sleeting so I called to reschedule. When I apologized for being too timid to drive two hours in inclement weather, his response was, “Please don’t apologize. I am here to serve you and we can always reschedule when weather is better.” 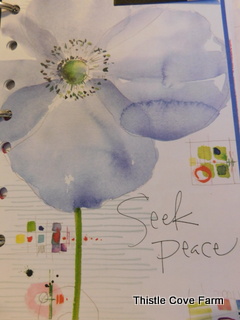 My planner serves me both daily and long term…the calendar pages I use are by Kathy Davis Studios and for each month she has an admonition. For January, it is “Seek Peace”….hmmmm…just can’t get away from peace, can I? Nor do I want to get away from peace…lol.

Yes, this month has been “challenging” and the problems, not issues!, continue but, throughout it all, peace has been both blessing and gift. Although there is much to be done to restore house and belongings, I am beginning to slow down. Helpers come and go but I’m here 24/7 and the burden of all that needs to be done is wearing me thin. Laundry has been enormous due to salvaging by washing and drying my quilting materials and supplies instead of simply throwing them away. Throwing something away when it can be saved by some hands-on work goes against my Appalachian thrifty soul. The dining room furniture is being glued and, in time, will be restored to the best of Eddie’s ability but there’s no need to hurry as it will, ultimately, only hinder the process. Therefore, I believe I’ll begin taking weekends off and will focus on doing those things I’ve been neglecting. Such as meal preparation, sewing, cleaning (notice where this is in priority…lol) and other things to be a balm and solace to ME. In other words, for a while, I am going to add me to the mix and I am going to serve…me.