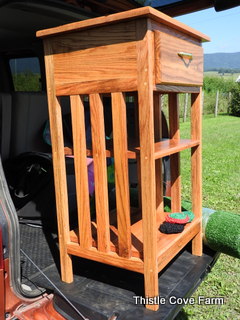 Saturday past, the Thompson Valley Community Center hosted their annual craft show and I always spend too much money…according to my wallet but not the crafters…grin. Mr. P. makes the most fabulous wood products…as evidenced by the solid oak side table I brought home. I believe he uses mortise and tenon but he could also be hiding the nails…don’t think so though. Even without the drawer, it was so heavy I was panting and had to rest a couple few times between car and house. 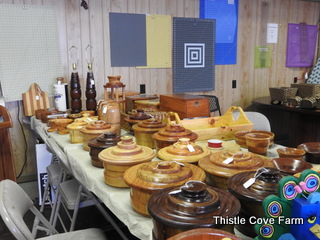 Mr. P’s table of wooden bowls, lamps, cutting boards, trays, etc. and Mrs. P. does lovely paintings on some of the woodwork. Mr. P. told me, “You need to come over; I’ve got a whole outbuilding full of stuff.” I replied, “Last time I visited you and Mrs. P. it cost so much money I had to write a check.” We both laughed because I bought more than a dozen Christmas gifts (and ended up keeping a lot some) and didn’t come close to damaging my checking account. (Yeah, I am a sucker for hand crafted goodies and plan a visit to his outbuilding…soon!) 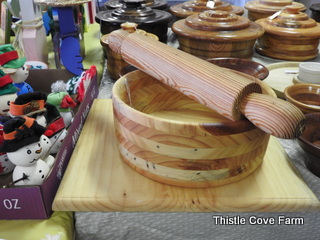 His prices are downright reasonable; these three pieces—cutting board, bowel and rolling pin—costs fifty dollars for the set; I’m ashamed to tell you how much what I paid for my table. 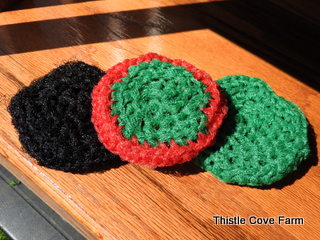 These are scrubbies, crocheted from tulle and designed to use at the kitchen sink, although one could use them as bath scrubbies. The one I’ve been using is long past prime but still usable so it’s great to find more; the price was so good, I bought three and since they’re thick, it’ll take a long while to wear out. 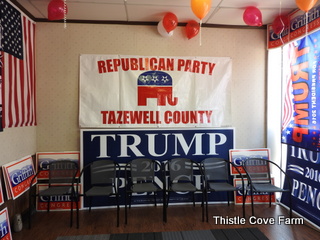 After the craft show, it was time to visit the grand opening of the Republican Party in Tazewell County. 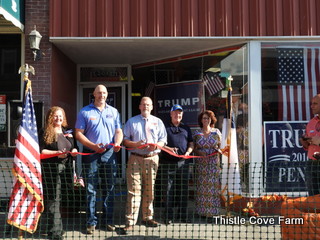 Ribbon cutting…left to right…Lynn Ratliff, Chris Ratliff, Party Chairman, Morgan Griffith, 9th Congressional District House Rep, covering slightly more area than the state of New Jersey (unbelievable!); Senator Ben Chaffin and Tamara Neo, local lawyer and, along with her husband, Flux Neo, operate Neo Law Firm. I’m not much on glad handing but did want to shake Senator Chaffin’s hand so I could introduce myself and say, “Senator Chaffin, I voted for you and would like to tell you why.” He thanked me and said, “Why did you vote for me?” I don’t think what I said was what he expected. “Because, sir, I know where you go to church.”
I’m not sure but I believe he blushed. “Yes sir; I’ve been a visitor in your church and believe you to be a man of God who will endeavor to be fair and honest in your dealings.” All those things are true; I have been a visitor in the church he attends and believe a person doesn’t attend a truly Evangelical church unless they believe in what’s being preached and taught. After meeting him, I believe him to be a humble man as well. I don’t go much for the belief that Christians shouldn’t be in politics and, in fact, believe Christians should be in politics. I don’t care for pagan rule, locally, statewide or in DC and am weary of well meaning idiots saying, “separation of church and state” as if Christians shouldn’t have a say in how we are governed!
The reason I went to the Republican Party Grand Opening is, I’m tired of only complaining and want to be part of the solution. I’m tired of people pontificating on Facebook and their blogs about why they believe Trump can’t be trusted or why Clinton is the devil’s spawn. Actually, I’ve stopped listening or reading when folks want to yammer on and on and on and…about their opinion so I’m working at the GOP office a few hours a week so I can say I actually made a difference instead of just made chin music. 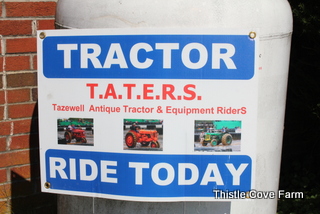 Sunday past, the TATERS…aka Tazewell Antique Tractor & Equipment Riders… visited the Cove. This group of antique tractor enthusiasts have their own Facebook page and a fair number of folks who haul their antique, and not so antique, tractors around Tazewell County to enjoy the fellowship, beautiful days and, in the case of the Cove, a benefit hot dog supper. 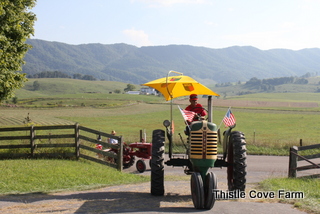 For those of you to whom such things matter, my apologies but I cannot tell you the year of this John Deere tractor. Bob H. is driving and I love how he’s rigged a canopy for shade…something I need for my twenty-plus year old Deere. 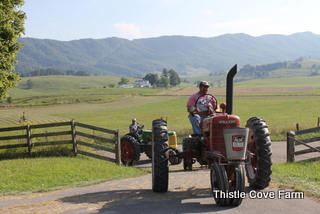 This tractor is driven by Daddy John, valley neighbor, the same Daddy John who cuts and bales my hay but on a different tractor. I seem to recall this is a 1930’s Ferguson tractor and believe he told me tractors with back skinny wheels and two closely spaced front wheels are most dangerous for mountainous terrain. I believe it and even though my Deere is much safer and has 4-wheel drive, there are still places on my farm that frighten me but not Daniel, a sometimes farm helper. 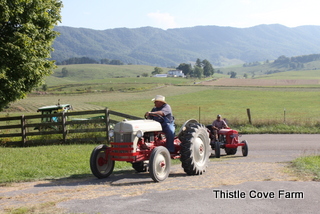 There were two of these Ford tractors and looked both sturdy, compact and a lot safer than the tractors with two small front wheels. I believe there were more than 30 tractors and a couple of UTV’s (utility terrain vehicles) riding from the Cove Community Center, across Rt 91—the only primary dirt road in the Commonwealth of Virginia—and back again. They left around 2:00 and returned around 5:30 for their hot dog supper. 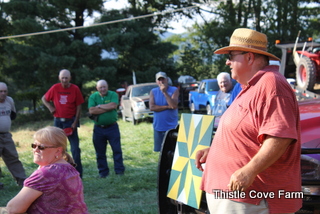 Bob Moss, Chairman, wearing the straw hat, welcomed the TATERS prior to asking Pastor Danny to bless the meal. Bob is celebrating his 19th year of being the Tazewell Bulldogs ‘voice’ at the Friday night football games. (Bob also dug the hole to bury Lightly, my first mare, last November…still haven’t been able to write about that event.)

I’ve got a couple of short videos showcasing the tractors to put on youtube; will let you know once they’re on-line, hopefully, first of the week. Frankly, after mostly standing for six hours on concrete, my back is crippled and I’ve been existing on Aleve, Aspirin and the occasional heavy duty Ibuprofen for grins good measure. A good part of my week has been spent with a heating pad between me and the floor, while I’m reading great books. Speaking of…are you familiar with Joe Pickett, Wyoming Game Warden? This series is written by C. J. Box and I have consumed as many novels as I can wrap my hands around! Who doesn’t love cowboys, eh?

Thank you for your kind comments on A Girl With a Dream Becomes a Woman With a Vision post; my plan is to respond Sunday, after church, depending on pain level.

Ponder this ~ Don’t get so busy making money to buy the things you want that you forget about the things money can’t buy.