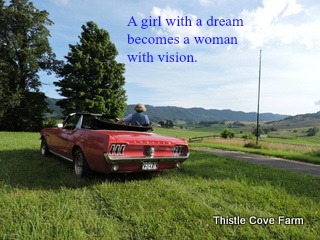 Everywhere I go (feed store, library, post office, church) people ask, “Can you believe it’s already the end of August?” My answer is, “I can’t believe I’ve lived, actuarially, two-thirds of my life much less it being the end of August already.”

Perhaps it’s due to the ennui of Autumn’s fast approach…Dave always said my blog posts had a bit of ennui to them and while that’s probably even more true since his death, I’m still not sure I agree with him. These past almost five years, I’ve lived in Dave’s shade and not his shadow and have learned contentment. The struggle has been real but I’ve learned to make a life out of what I now have and not what I’m missing. I’m allowing, even encouraging, myself to be myself and know how to be quiet and listen for God’s whisper although that’s fairly easy since I don’t have the intrusive noise of radio or television. If I do listen to either, it’s XM preachers or DVD’s that are of my choosing and not what subscription throws at me and calls “entertainment”. I chose to give up subscription television because I object to porn coming into this house. Yes, I do know I can change the channels but I was tired of having porn thrust upon me when channel surfing. It’s a small way I can honor God and myself. I’m too important in His eyes, and my own, to see anyone devalued for the sake of a cheap laugh or ‘filthy lucre’. 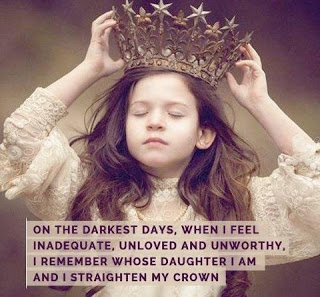 (Marti sent the above to me, it arrived at a much needed time and I am grateful she heeded God’s whisper. If I knew whom to credit, I would be delighted.)

Perhaps the bittersweet, but not ennui, is due to the aches and pains of bones, joints and muscles that receive hard use even though they protest…or perhaps it’s due to the skeins of Canada geese that have returned. 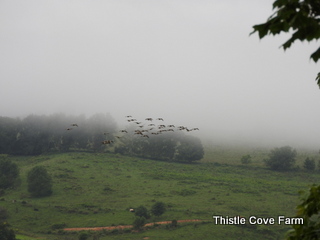 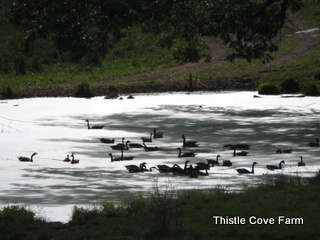 The days are languid, still full of heat but the dark hours before dawn have a chill that say winter is hard pushing autumn who urges summer to pack and leave. Garden weeds are taller than me and, once again, my ambitions have exceeded my abilities. Heck, I can’t even remember to go to any of the farmers’ markets that dot the landscape and am lost among all the work. A glance tells me the hay bales are lined against the fence, waiting pick up and there are bales under storage being kept dry against the weather for my beasties when pasture wanes and snowballs fly.

I cry a lot these days but it’s out of happiness, or at least contentment. How can I be homesick for heaven when I live here? If I won the lottery, I’d keep this place, hire an on-site farm manager and spend winters near my family and summers here. Then again, as someone told me, in order to win the lottery, I must buy a ticket. There’s always a catch, isn’t there? -wry smile- 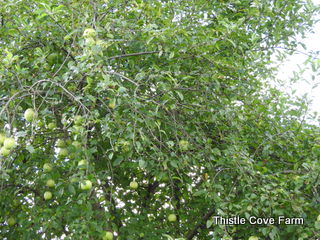 The apple tree is loaded and promises pies, cakes, butter and out of hand eating but only after a hard frost. That’s when the apples are sweetest, that’s when they release their best. Eleanor Roosevelt said, “A woman is like a tea bag. You never know how strong it is until it’s in hot water.” I say it’s like a Christian…when God allows trials and troubles, He, and we, find out what we’re made of. We can either turn to Him or away from Him; it’s always our choice but, sometimes, people forget it’s not about the here and now, it’s about the hereafter. Just recently I said privately to Becky, a blog reader, “Christians haven’t any idea what the Bible says about anything; therefore, they’ll believe anyone and then say, “In my opinion…”. AS IF a Christian has an opinon…WRONG! Christians are to have a Biblical world view…so…what does the BIBLE SAY? THAT’S what a Christian believes…what the Bible says. If we think we won’t have to stand before God and answer for every word, thought, deed, vote…we’re in for a very unpleasant surprise. We’re so consumed with the here and now, we’ve forgotten about the hereafter. Because we only see the here and now, we can’t envision the hereafter and that’s so sad. The Lord God who created Creation has such enormous, glorious plans for us and we sit here, quibbling over non-essentials.” 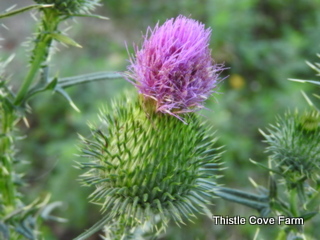 Similar to the old song about if you want to have roses, you put up with thorns, at Thistle Cove Farm thistles comes with thorns and a wild, regenerate beauty that promises “beautiful one day and perfect the next”. In response to a six year old girl’s dream, God gave me Thistle Cove Farm. He has allowed me to be a steward here; He has grown me into a woman with vision; a vision that doesn’t end here but will continue where He wills both while there’s breath in my body, then into eternity.

God doesn’t abandon His plans, and His plans for all His children who accept Him are plans to prosper us and not to harm us, plans to give us hope and a future.

Because God can be trusted,
I choose to trust Him.

What were you born to do?