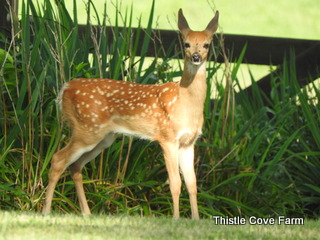 A recent visitor to Thistle Cove Farm is still here. This fawn and mother were in the hay pasture when Mom decided to jump the fence. For some reason, the fawn wasn’t comfortable following, stayed behind and, eventually, made her way to the yard. To allow the fawn access to pastures, I opened gates and she made way to the upper pasture, “helped”, I’m sorry to say, by Sam P. Spade. Hopefully, Mom is able to find the baby but if nothing happens, this fawn should be old enough to make its way. It’s really too young yet but I’ve done what I can do. 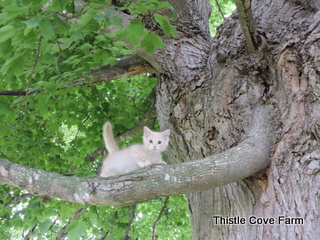 ~ Good Golly Miss Molly ~
“To lie sometimes on the grass
under trees on a summer’s day,
listening to the murmur of the water,
or watching the clouds float across the sky,
is by no means a waste of time.”
~ John Lubbock ~

Dog days are winding down as Sirius, the Dog Star, wends its way across the night sky. The traditional time period is July 3 – August 11 due to the ancient Greeks interpretation of the Canis Major constellation. Sirius is the dogs nose or dog star and chases Lepus, the hare. 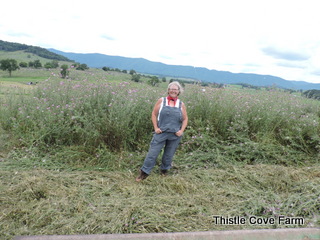 To each their own, Dogs. I wear bib overall’s that are too tall for my shorter frame. Fortunately, each leg can be rolled up and snapped to shorten the legs. Recently, someone told me to cross the straps in the back and that will take up a little more fabric which will, hopefully, help. Behind me is a stand of thistle that was mowed down; in fact, the entire field was mowed. Some folks wanted to bale the hay in this field, change their minds and I mowed everything down. It took me about 3 days 9 days…1 to mow, 2 to recover, 1 to mow, 2 to recover, 1 to mow, 2 to recover. Knees are wrapped like babies in swaddling clothes bandages yet still manage to feel the pain of working the clutch, brake, gas. When using the tractor, both hands, both feet are called into use and all feel the agony. Usually I wear a visor but lost it somewhere along the way; haven’t found it yet. 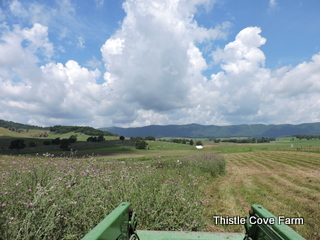 Not a bad day at work…good scenery, nice breeze, great equipment and God’s strength to keep me going. The fields haven’t been sprayed since 2009 but this coming spring, they’ll be sprayed for weed control. In case someone wanted to buy USDA ‘organic status’, not spraying chemicals is important but I no longer care. The weeds are terrible and I’m too old to keep up; I’d rather have a good field of hay than weeds. 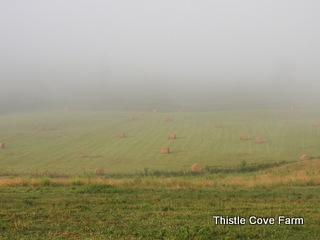 This morning, a heavy fog covered the valley, making the round baled hay resemble Shredded Wheat in a field of green. This cutting yielded 33.5 round bales 5×5 feet and weighing about 1100 pounds. Even before cutting, someone asked to buy so they’ll be contacted to bring their trailer and, using the tractor, I’ll load their hay straight from the field. My bales will be moved to the barn lot, stored under shelter, waiting for winter. 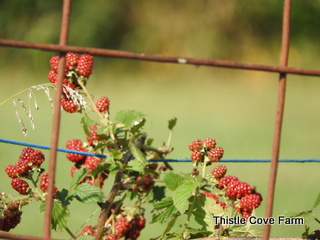 Thornless blackberries have a good harvest; enough for several cobblers or one cobbler and some to freeze. Some years ago, Dad gave me the slips and this is the first year they’ve born abundantly. The apple tree is going to have an abundant harvest as well…delicious apples, I believe them to be Punkin Sweet, a heritage apple that, after a hard frost, eats well out of hay, makes delicious pies, cakes or can be dried, canned or frozen.

Soon, very soon, I’ll have a Youtube site where videos of Thistle Cove FarmLife! will be shown. Last week was my 21st wedding anniversary and I left home, thinking to take myself to lunch. Instead, I found myself at Sam’s Club where I bought a GoPro (expensive non-lunch!), brought it home and managed to take a video of me doing tractor work. One of my errands is to stop by Studio Addison, take a cake, my GoPro and some other things to wheedle them into helping me ask them to help me. 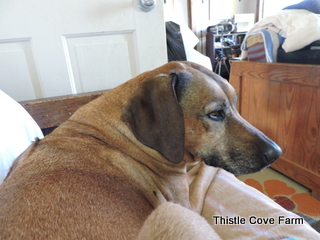 Leaving you with a photo of Sadie, above and Sam, below 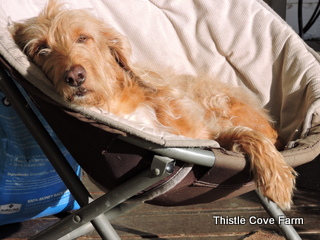