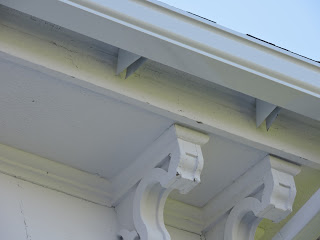 MERCY! The photo options are set on 320 dpi, lowest I can get it, and it still takes between 2 and 3 MINUTES to load a photo…lordy! I’m thinking this post will be heavy on verbiage and light on sights.

Recently, my old house needed new gutters. It needed new gutters because the company who put on the gutters in 1997 either didn’t know what they were doing or didn’t know what they were doing…choose one. So, I checked around, had some, mostly scary, folks come out to give estimates then decided on William Gillespie Construction Company. William is the son of Ron, whom I’ve known for 20 years or more. When Dave and I first moved to the farm, Ron was starting out in business and we gave him all we could. Ron is a fine man, raised a fine son and both of them are the kind of men I can say, “Here are the house and farm keys; I need to be away for a week…make yourself at home, fix the ____ (fill in the blank) and send me a bill.” I know two things…1. in the house, everything will be as it was when I left and 2. the job will be done correctly and well. 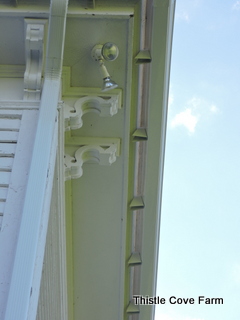 Due to the age of my house, there aren’t ready made gutters fasteners so William fabricated them. He did an outstanding job and I’m over the moon pleased! William has done other work on the farm and house and always, always, always I’ve been pleased with William, his men and his work. Come to think of it, when he and his men put the gutters on the house, I was away. They came, they worked, they left and I never saw them…only the lovely finished job. If you’re in need of construction, call William; he’s honorable, has integrity and does a fine job.

Next up…the boundary fence between a neighbor and I needed replacing. My guess is the original fence had been in place since the 1940’s when my farm changed hands. A little history…In the late 1760’s a hunting party was asked to also be a scouting party with the promise of l.a.n.d. which is enough to make almost anyone’s heart flutter, at least it does mine. This hunting party had one of Dave’s umpty ump great-grandpaps in it and that’s how they ended up in this valley. Down the road a piece, is Fort Maiden Spring (then singular, now plural due to the mistake of some government employee who refused to correct his mistake..true story!) also known as Rees Bowen Fort after the Bowen who also named Maiden Spring. Dave’s mother always said her umpty-ump grandpap was hunting, became weary, took a nap and upon awakening, spied a maiden deer (young doe) drinking from the spring. Dave always said it was because his umpty-ump grandpap was hunting and killed a maiden deer at the spring…both stories are plausible.

Anyway, the Bowen’s settled this valley, as did the Ward’s and after The Late Great Unpleasantness, my farm, with original holdings consisting of thousands of acres, was sold to Shadrach White for $300 which was the amount owed in back taxes. I’ve been told different versions re. Shadrach White – the realtor who showed/sold us the farm said Shad was a carpetbagger from OH, others have said he came here from Russel County and others said he was born in Tazewell County. I haven’t a clue but he owned this farm until 1948, when he sold to Dave’s cousin’s grand-pap. In due season, the farm came to Dave’s cousin and we bought it in 1995.

It needed fences. whew…back to the point, eh? In Virginia, a border/boundary fence is to be shared by both land owners 50/50. I found a fencing company, Waddle Fencing, from over in Chilhowie and, in due time, he sent his men to construct a border/boundary fence. The road from Chilhowie, Rt 91, is the only dirt primary road in the Commonwealth of VA and, generally, folks, especially tractor trailer drivers, don’t pay much attention to the “no trucks over XXX in length” sign. They look at a map or listen to GPS and think (if they do think), “Well, this is a primary road, it’s got to be good and it’s a short cut.” Wrong, wrong, wrong. Okay, it is a primary road and it is a short cut…it’s especially short when their rig fails to make the S or U turn and goes over the mountain. Seems like every summer someone thinks they know better than the sign and look out Dudley, it’s all over but the cursing.

Anyway, there aren’t any stores, not even a Mom/Pop store and most of these fellers don’t pack a lunch. The first morning, I made them sausage biscuits, the second day I made the sugar cookies and the third day I made them more sausage biscuits (morning) and also gave them bottled water (afternoon). I’m pretty sure they didn’t mind working here…grin…although I told them their photo would be on the blog last week. Sorry! 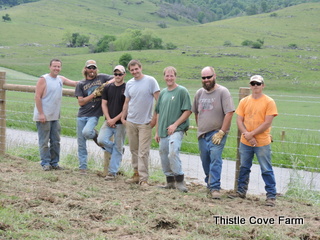 Not only did they build a border/boundary fence, I had them replace a section of fence along the L of Maiden Springs Road and Cove Road. Probably, it could have stood a few more years but it seemed the prudent thing to do as the men and equipment were here. Good looking bunch of young men! Matthew, second from left, was one of the equipment operators and he could moonwalk that machine…WOW! All the men had nicknames but I can’t remember, then or now, but do remember Matthew because his name means ‘gift from God’. 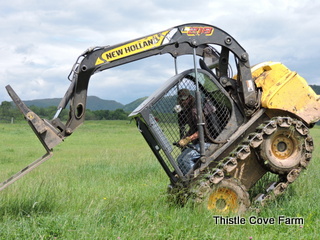 Their fences were straight and true…a thing of beauty and a joy for many years to come. I do love tending, and making beautiful, this old farm! 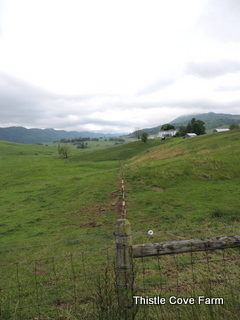 Now I get to the roots part of the post…it’s dang difficult to make a straight line, as evidenced by: 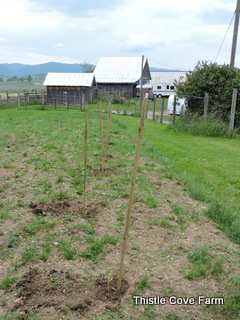 There are two rows of tomato plants, one ending in sweet peppers and am getting ready to put in a few rows of sweet corn and Roma beans. Some squash and pumpkins would be nice as well. And, no, the rows don’t get much straighter than this…but I bet the stuff will still grow…grin. 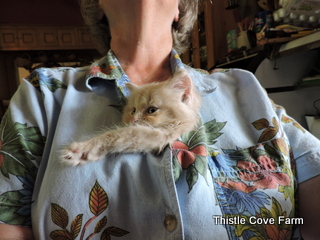 This is why I didn’t blog about the fence fellers last week…little over a week ago, coming home, I rounded a curve and this bit of fluff was in the road. I just sighed. “God, I’ll stop but I’m not chasing it. If I call and it comes, I’ll take it home and do my best to save it.” 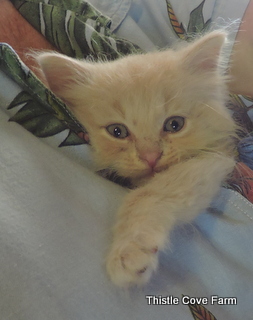 Looky, looky who comes when called. I should name him Samuel but Sam P. Spade, Secret Agent/Angel might get in a huff. My guess is…s/he was about 5 weeks old; still had blue eyes, was so thin every rib was visible but had a voice like a hog caller. S/he gets feed warm kitten formula, made fresh each time, about every 2 to 3 hours then, a few times a day, has a little nap while tucked inside my shirt. Over the years, I’ve found rescued kittens do better when they get some heartbeat time and it doesn’t hurt me to take a break either. No clue what the name is…has yet to say but it’ll come… in time.

No, I really didn’t want another mouth to feed or something else to take care of but…God has a plan. Mom asked me, “Why do you rescue so many animals? They must cost you a fortune!” My reply, “Why does God keep sending them to me?” and no, I haven’t a clue but when He puts them right in front of me, I do my part. I’ll grow this one far enough so s/he can have vaccinations and be spayed or neutered then find it another home. That’s my plan, anyway.

So, God…while You’re up there tending to business, how about finding…and sending…the next steward of this farm? Please God, work that plan and thanks.

Thank you for visiting; next post I’ll show photos of Poppet…I’ve been tarting her up and she’s right purty now.

Ponder this ~ carry your happy with you ~