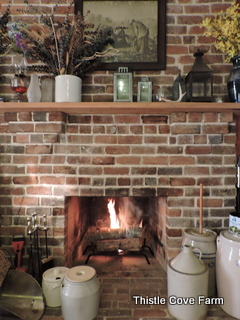 These June mornings have been fabulous; a cool night ends with still a hint of chill in the air so logs were laid in the kitchen fireplace. When we first moved to the farm, the kitchen fireplace needed to be rebuilt so, using original slave made on the farm bricks, George, a friend of Dave’s, and his helper Everett, came to the farm, lived here and started construction by lining the fireplaces to make them safer. The house has fireplaces in almost every room and was the only method of heat in the 1800’s, up until the mid 1900’s. That first winter of 1995-96, in January, Dave and I moved our bed three feet from the Vermont soap stone wood stove and slept warmly. Since then, storm windows, doors, and insulation have rendered the house toasty, especially when the soap stone wood stove is put into service. The only thing warmer than wood heat is coal heat but wood heat is a lot cleaner, especially when black locust and other hard wood is used.

Let me back up a bit…the house that was here originally, was a brick house, made with slave made bricks on the farm. Now, before you get your panties in a twist, neither Dave nor I had anything to do with any of that…it was long before our time and, for your PC environmentally correct types, we made do with what we had. In Appalachia, it’s always been about reduce, reuse, recycle, re-purpose so we used what was here and it’s beautiful! Some of the crocks are hand me downs from Aunt Bonnie, Daddy’s oldest sister, who got them from her Grandmother, Delilah. From the left, that crock is used for making pickles and kraut, the next crock is used for churning a gallon of cream into butter, the next crock is not used and the other two crocks are used when I’ve got more than a couple of gallons of cream. I only have one dasher and it’s been repaired more times than Carter has liver pills so I handle it with extreme care. If you know of anyone who makes dashers, that information would be greatly appreciated! 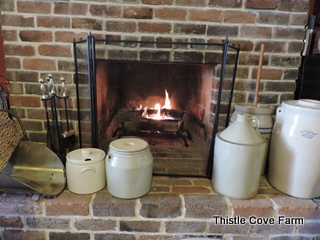 The mornings are quiet but with doors and windows open, I can hear bird song, cattle lowing, the bleat of lambs and horses neighing all contributing to the cacophony that is bliss for me. Others may need television or radio but I find that particular noise overwhelming and entirely unwelcoming. More than two years ago I gave up television and my life has been richer, deeper, more meaningful and just plain full. 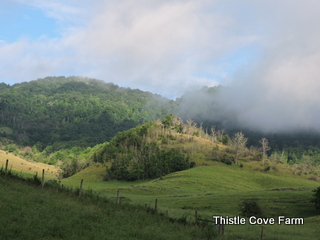 I feel a little like Tasha Tudor, sitting in my rocking chair, beside the crackling fire, knitting in hand, cuppa coffee close by. Or even Gladys Taber, a favorite author from the late 1950’s through 1970’s who wrote of the advantages of home, how it succors one and, when done correctly, envelopes one in a cocoon of coziness, preparing for those times when the outside world intrudes or one has to go to the world. I find as I age, I keep close to hearth and home with no apologies for venturing much away. As Susan Branch says, “the kitchen is the heart of the home” and mine is beautiful…especially when a fire is lit in the fireplace, good cooking smells are coming from the re-furbished 1914 Acorn cook stove and, scattered around the room, dogs and cats are snuggled in their comfortable beds. 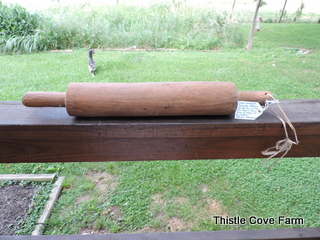 Delilah Hamrick, was the mother of Sampson…yes, true! Sampson hand carved, from a solid piece of poplar, this rolling pin and gave it to his mother…perhaps as a Christmas gift but I don’t really know. Sampson is credited for taking the Methodist religion into Webster County, WV and was a fine fiddle player while his Mother was known as being a Godly woman. I have a mighty fine heritage. 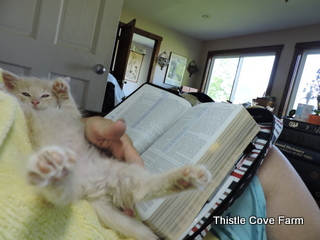 On May 23rd, I rescued this kitten, at the time approximately five weeks old and, perhaps, 48 hours from starvation. Now, at nine or ten weeks old, with needle sharp teeth and claws she rules the household. Her name came to me as she was trying to climb my bare leg as I was preparing her formula…”Good Golly Miss Molly, give it a rest! I’m hurrying as fast as I can!” My words fell on deaf ears. Because she’s the youngest member of the household, every morning she eats first and later, Miss Molly takes a nap on my lap as I read my Bible. 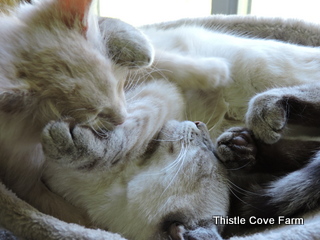 Fortunately, the other cats have accepted her and they torment all the way ’round. I’m happy to have the help but Miss Molly is too young to realize ripping into me isn’t acceptable. When that happens, she gets a swat and is quickly learning the meaning of the word NO.

When she’s tired from all that rough housing, she likes to sleep in the cat condo, beside the window overlooking the bird feeder. This site is known as “sitting in the catbird seat” and the cat condo is used by almost all the cats. 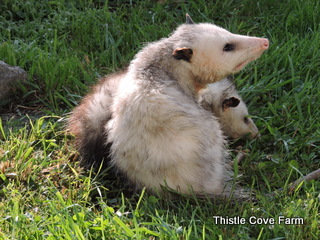 If you’ve been waiting for the X rated portion of this post, here ’tis. One morning as I opened the house and walked out on the back porch, these two amorous possums greeted me by hissing and snarling. Hey…get a room, you two! They stayed for about thirty minutes, royally disturbing the tenor of the morning and unsettling everyone. 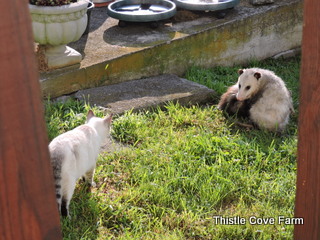 Anna attempted to investigate but was snubbed so she backed off. 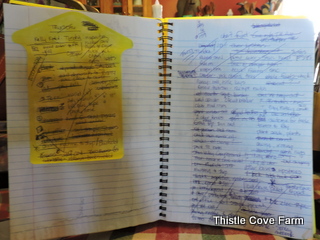 On the right is my to-do list for one day while on the left is my errand list; when I leave the farm, I make my trip count by starting at the point furthest and working my way home. It seems errands take up the entire day, no matter how many or how few. Then again, when do I ever have too few? Dark clouds are moving in, I hear thunder and the advertised storms are moving into the valley.

Today, take care of you, do something that brings you peace and enjoy the day the Lord has made.

Ponder this ~ to be rewarded with good health, treat your body like a temple, not a tent ~