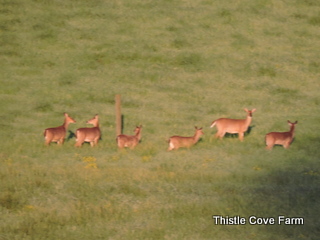 Y’all know how difficult it is for me to leave home. Truly, leaving my animals, farm and home is hard enough but to leave sights like these six white tail deer above…dang near impossible! 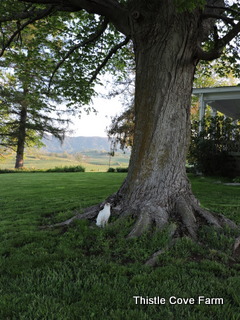 Watching Anna as she considers climbing the maple tree. 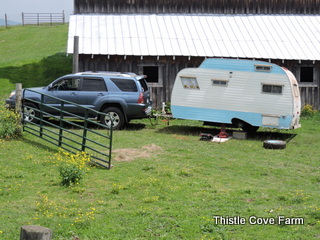 In the past two weeks, Donald has been working on my 1965 Serro Scotty Gaucho Sportsman camper. Baby got new shoes last week, along with a brand new (as in there wasn’t one) spare tire. Beloved Sistah and I drove this little gem home the day after Dave died…we drove it on a prayer and faith because it never dawned on either of us to check for a spare. Beloved Sistah’s husband had packed the wheel bearings but none of us even considered a spare. Babes in the wood, I’m telling ya! Absolutely clueless!

Oh wait…the first of the story…Dave wanted to go to the beach so I took him to Myrtle Beach, SC. While there, Beloved Sistah called and said, “Sissie, I’ve found your camper!” The then owner sent photos (isn’t technology absolutely amazing?!) not of ‘my’ camper but of a camper in a magazine and said, “This is, basically, what I’ve got” which should have been a red flag…but wasn’t. Sistah and her husband looked at it, I was told, “Well, yeah, it’s a lot like the photos” so I looked at Dave. His response? “You’ve always wanted a little canned ham camper; buy it. Life is short, buy it now.” So, we did some fancy bank wire transfers, BIL packed the bearings and they towed it back to their house where it sat for a few weeks.

When I asked Dave if he would go camping with me, he replied, “Well, the last time I went camping, it was with Uncle Sam and he didn’t pay me nearly enough. You just camp your dream and I’ll be at home if you need bail money.” LOL

A few days later, I went to central VA to host Mom and Daddy’s 60th wedding anniversary luncheon and to pick up the Scotty camper. On Saturday morning, Dave died very suddenly and unexpectedly and the subsequent phone calls are still crazy in my memory. I went into shock and the next years are still a blur but I do remember the morning after Dave’s death, Beloved Sistah and I driving the camper to the farm, towing my dream that Dave never saw. 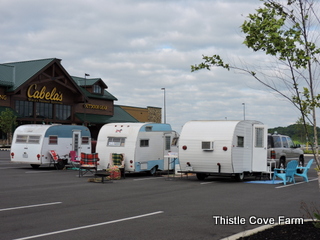 This past weekend, Cabalas had a nationwide “Ladies in the Outdoors” event so some Sisters on the Fly members and I met up in Bristol, VA. Rachel drove from Ohio to join in the festivities and stayed in Nancy’s camper.

Above photo…on the right, Ruth from TN has a 1959 canned ham but, my apologies, I can’t remember the model. On the left, Nancy from VA has a 1969 Serro Scotty and...ta da!...in the middle is 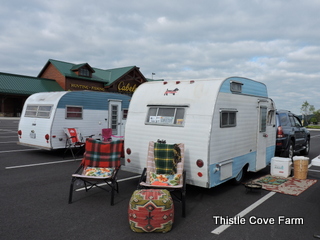 Thistle Cove Poppet!
Dave named the camper “Cove Toy” which we had put on the first license plates…although, come to think of it, he never saw those tags either. They are still in the back window and that’s where they’ll stay…unless a state trooper tells me they can’t. 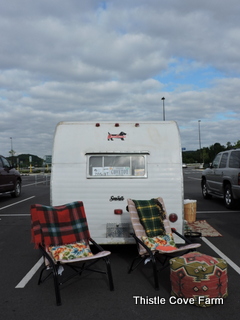 I’m waiting on permanent tags that say “Poppet” which will be attached to the license plate holder. My chairs have pillows for back support, wool blankets to ward off the chill and the ottoman (foot stool) is made from kilm rugs. 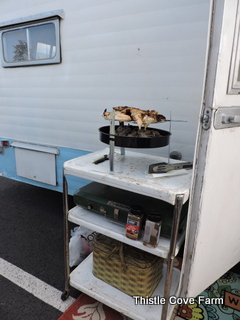 This is my outdoor kitchen…that dang grill was thrown away when we left yesterday but it did do the job of cooking the chicken on Saturday night. The Coleman cook stove, second shelf, I’ve had for almost 40 years and the 3-tier metal server and metal basket are both even older. The metal basket is where kitchen stuff is kept. 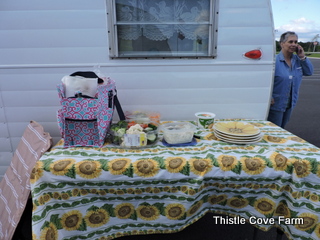 Because space is at a premium, stuff is kept in baskets of whatever variety; the trouble is…remembering what’s in each basket so when they have covers, I use masking tape as a ‘memory aid’.  In the above photo, the kitchen table is set up buffet style and Ruth is calling her husband to tell him someone stole her ottoman.

Yep, some fool helped themselves to her ottoman…a beautiful blue and green stripe to match her camper decor. When I first got there, I kept all my stuff inside a locked camper and car and didn’t set up camp until I was ready to stay at camp (in the parking lot). About the only person I’ve never had ‘trust issues’ with was Dave and I still trust no one until they’ve earned my trust. Oh yeah. I’m nice, polite and all that jazz but I just have low expectations and am seldom disappointed. lol After the ottoman theft, one of us was always at camp…we took turns going into Cabala’s, shopping, toilet breaks, etc. 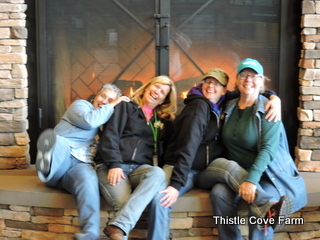 From left…Ruth, Nancy, Rachel and me, sitting in front of the huge fireplace as you walk into the store. It was a great trip…allowed me to camp close to home and work out the little kinks one has with a vintage camper. The icing on the cake…Cabala’s had daily drawings for a $50 gift certificate and I hadn’t been home an hour when I received a phone call saying I’d won! 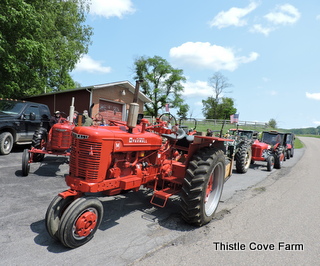 As I rounded the bend at the Cove Volunteer Fire Department, I was met with a bevy of vintage tractors. The TATERS were out in full force…Tazewell Antique Tractor…something or other, can’t remember, were taking a beautiful, but chilly, drive. I’m beginning to believe God doesn’t want me to leave the Cove because He knows I’ll never be as happy anywhere as here…at least until I get to Heaven!

Thistle Cove Poppet performed brilliantly and made me proud of her stellar maiden voyage and, very soon, I’ll have more photos of the inside. Poppet has a partially new paint job, some divine bedding, the porta potty worked well and other wonders!

Some of you have been reading my blog for many years (I’ve been blogging more than ten years!) and know of the happiness, joys, sorrows, Dave’s death, my journey through the shocking grief and fog…you’ve prayed for and with me, you’ve sent such kind notes, etc. Yes, I am woefully behind in blog visiting but know this…I am not behind in tucking you in prayer. God brings your name to mind and I, immediately, tuck you in prayer. I don’t need to know the whys because God knows; I just need to say, “God be with ____ today, right now as s/he goes about her/his day. Give them peace, mercy, grace, joy, happiness”…whatever God brings to mind. He loves you with an everlasting love and underneath are His everlasting arms…it’s a privilege to remember you in prayer.

Ponder this ~ “God cannot endure that unfestive, mirthless attitude of ours in which we eat our bread in sorrow, with pretentious, busy haste, or even with shame. Through out daily meals He is calling us to rejoice to keep holiday in the midst of our working day.”
~ Dietrich Bonhoeffer ~