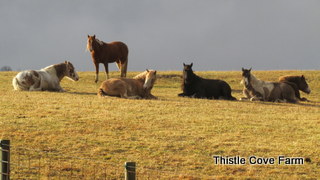 Nancy, A Rural Journal blog, has brought back Random 5 Friday where folks join in by posting five random facts about any or everything. Frankly, I’m over the moon happy it’s Friday and am seriously considering a tub of hot water, Marcia Willet‘s A Prodigal Wife, a tot of Jack Daniels with honey followed by my flannel nightgown.

1. Above, my American Curly Horses are having a lie down during a windy but warm and sunny day. From the left…Dandy Man, Dani Girl, Peaches, Tumbleweed, Izzabella and Meri Go Lightly. 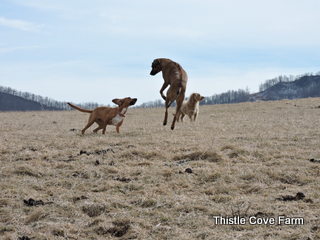 2. In the same upper pasture, Daisy, a redbone hound, gambols with Sadie, a Rhodesian Ridgeback, and Sam, a basset hound spaniel terrier mix. I’m partial to hounds, can you tell? 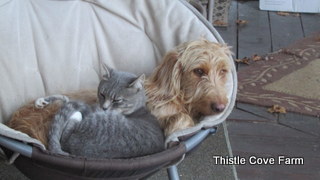 3. My two favorite house boys, Sam and Gray Tom. Shortly after Dave, my husband, died Tom walked up the driveway and said, “Honey, I’m home.” Two months ago, Tom died and I’m still reeling from the loss. Since November, there have been a lot of deaths on this farm and each death cuts me to the bone. 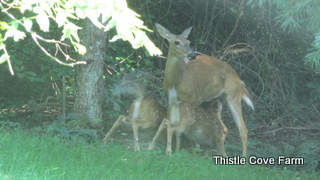 4. Not sure if you can see this clearly but the Mama doe has her tongue hanging from the side of her mouth. Her twin fawns are nursing rather energetically and Mama is nearing the weaning stage. 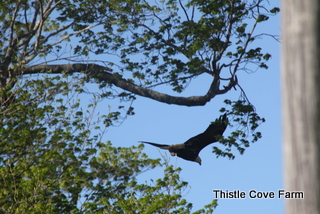 5. My valley has a fair share of eagles and, ever now and again, I catch a good photo. I’ve heard a number of preachers say an eagle won’t eat the carrion of others but I know for a fact that’s not true. Eagles eat their kill and the kill of others and I’ve watched them eat stuff that’s a day old. Isn’t it funny how we latch onto something, believing it to be truth and just keep telling and re-telling the same ole sorry lie?

Those are my photo contributions and hope you like them. It’s the bet I can do after a day spent outside in harsh winds but sunshine. There were so many outdoor chores…pruned the fruit trees and bushes, cleaned out a dozen flower pots to get them ready for plantings, tied the tarp on the camper (again), moved the blueberry bush (not the right time of year but if it makes it that’ll be a lot better than being run over where it was), swept the front porch and re-arranged the furniture…still need to put up those little upside down question mark -?- hangers for the hanging baskets…and gave it all up late afternoon so I can join Nancy then take care of me. 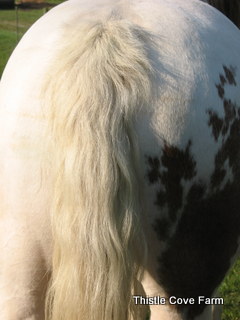 Ponder this ~ “We should not judge people by their peak of excellence; but by the distance they have traveled from the point where they started.” ~ Henry Ward Beecher ~