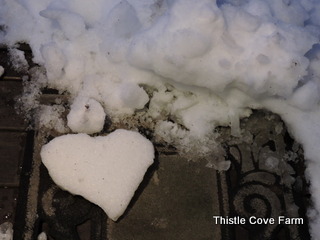 May I be the first to say, Happy Valentine to you? While cleaning the porch of snow…which is to say I found the edge of the mat and pulled up…this heart was my gift. 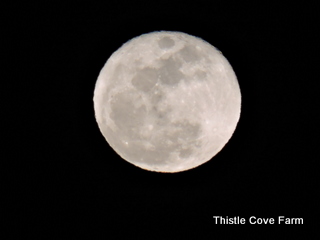 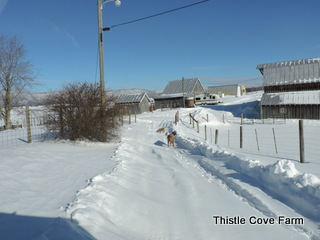 The driveway had drifts of about three feet but my Ranger was able to move about albeit with some difficulty. Daniel Miller, using John Fisher’s tractor and snow blower, cleared the driveway…a wonderful gift! 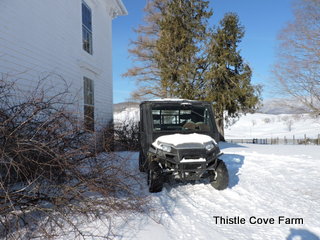 Each day, the Ranger was parked next to the house, out of the worst of wind but with the nose exposed to the first rays of sun to warm the engine. Have I mentioned how often I bless Dave’s name and memory for buying this work horse for me? It has never failed although the wind shield wiper no longer works…not sure what the problem is and will have to ask around for ideas. 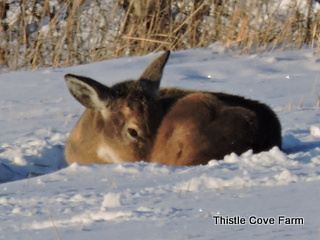 One morning I woke up to this sight…this white tail deer was asleep in the field next to the house. Fortunately, deer in this valley always eat if they find the pastures where silage is put out for cattle and hay for horses and sheep. 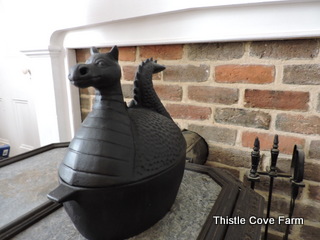 ~ Here there be dragons ~

There resides a cast iron dragon atop the wood stove and when the stove heats up, vapor pours out of the dragon’s nostrils. While it’s true, it’s not a lot of vapor, it’s also true the dragon provides me with amusement on a daily basis. I am so easily entertained! 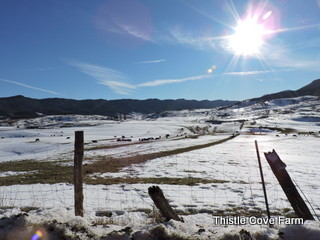 Thistle Cove Farm can’t be seen in this picture unless you know where to look, but it doesn’t subtract from the beauty, does it? 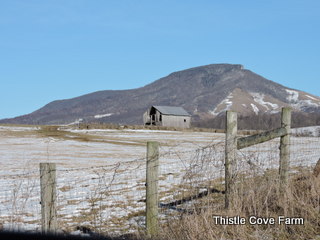 My neighbor’s barn against the backdrop of Morris Knob. One site says it’s 4,455 in height while another says 3,500; I suppose it’s a matter of…you choose. According to this site, Morris Knob was named for Morris Griffith, part of a hunting party in 1767-1769. The hunting party was put together to encourage expansion and anyone interested being a member would be given a land grant. The names in the hunting party have heirs still in Tazewell County: James Burke (for whom Burke’s Garden is named), Rees Bowen (Dave’s clan), William Harmon and others. 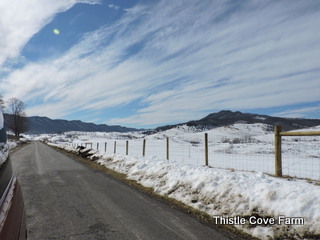 VDOT did an outstanding job of clearing our road; it took several passes daily but they persevered and a clear road is the result. Their diligence allowed me to make a run to the grocery and feed stores, all the eaters at Thistle Cove Farm are most grateful.

How did you manage January’s snow storm?