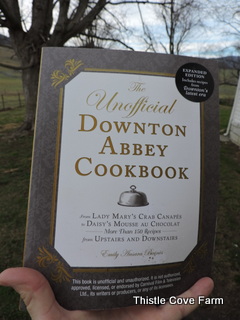 For the first time in years, I was able to visit family over Christmas and, as a gift, my Beloved Sistah took me to visit Dave’s grave. He’s buried beside Cathy, his first wife who died of cancer in the late 1980’s and both are buried in Hollywood Cemetery in Richmond, VA. Hollywood is named for the large numbers of holly trees that adorn the 135 acre garden cemetery. 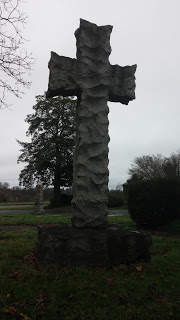 It was designed in 1847 by Philadelphian John Notman and three, perhaps more, American presidents, six Virginia governors, two Supreme Court justices, twenty-two Confederate generals and more than 18,000 Confederate soldiers are laid at rest. Adult graves were sold for $4 and children graves for $2 but in 1864 the prices were raised to $20 and $10 and since 1954 funerals are allowed Monday through Saturday only. Needless to say, prices are higher these days and Arlington Cemetery receives the most visitors in the nation with Hollywood being second.

An estimated 7,000 Confederate soldiers were re-interred from Gettysburg to a location in the Soldier’s Section called Gettysburg Hill; if you’d like to take a virtual tour of the cemetery, click here. 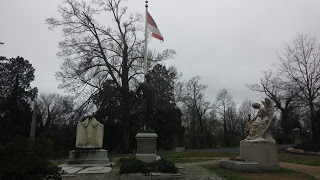 and, in other sections, Presidents James Monroe and John Tyler. 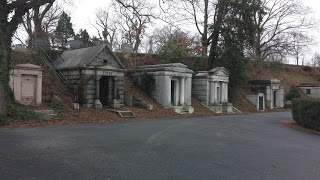 Hollywood is the most beautiful cemetery I’ve ever been in; at every turn, especially in the older section, the memorials, markers and wordings tug at the heartstrings. 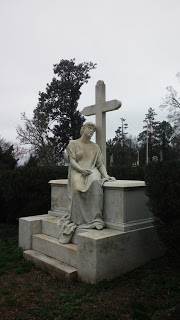 “They that wonder shall reign
and they that reign shall rest.“
(reads one inscription)

A portion of the movie The Jackal was filmed in this cemetery and for more Hollywood Cemetery history click here; for a list of notable residents, click here. There are a variety of tours, here, including walking, driving your own vehicle, trolley and Segway with one of the favored sights a cast iron statue of a full size Newfoundland dog who guards the grave of a little girl who died in 1862.

The Talmud says, “man has three friends on whose company he relies. First, wealth – which goes with him only while good fortune lasts. Second, his relatives – they go only as far as the grave and leave him there. The third friend, his good deeds, go with him beyond the grave.” 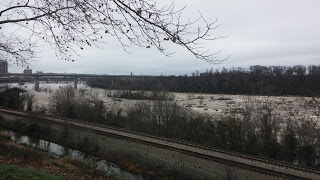 And so it was with Dave; his good deeds, his good name, his honor and integrity have all gone beyond the grave. He’s remembered as a good, fair, decent and kind man and, better yet, he’s remember by me as making his peace with God only five days prior to his death. I’ve often wondered: did he have a premonition of his death?

When Dave was released from cancer treatment, I bundled him up to bring him home, a drive of six hours, but an hour from home, he crashed. I managed to get him to the nearest emergency room where the ER folks went into high gear as they got him into the hospital and began working to bring him back but he stayed in the ICU for a week, the hospital one night, before I could bring him home.

These handful of years later, I’ve come to realize Dave knew more than he ever told me. He let me do the hard business of taking care of him, his medications, his medical appointments, home health care, etc. while he kept his own council. Some days I prayed like a crazed woman as I drove the car to the back porch, then handled Dave, the oxygen tanks, the blankets and all the other paraphernalia while battling snow, ice and high winds.

Those harsh winter days were sheer misery. His energy level was zero and often he leaned on me as we both struggled to go from house to porch to car to doctor’s offices, hospital and back again. I took care of him as he’d taken care of Cathy and the circle was complete when I took him back to Richmond to Hollywood Cemetery to lay him beside her.

As I stood at his grave, I waited for the emotions to overwhelm me but they never came. Dave isn’t there, beside Cathy’s grave; they’re both in heaven and, for me, Dave is here, at the farm where every stone and blade of grass reminds me of him and our life together. It’s here the tears still come and I wonder, “Dear God, how can I bear to leave this Sanctuary we built together?” and I don’t know; I really just don’t know.