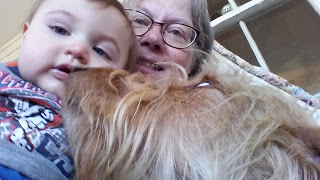 This morning, at 0:dark thirty the phone rang and when it rings at that hour, I’ve a good idea who is on the other end. This morning I was right; Mary wanted to know if I could keep Drew, her grandson. The regular baby sitter had influenza (that’s what it sounded like) and all their other stand by’s were sick as well. Apparently, there’s something going around but since Dave got sick in 2010, I’ve only been sick once…a huge blessing, thank God! I mean really and truly sick…the grippe, not the grip…as in I’ve got a grip on the bed and don’t wanna get up. (Which never happens because the animals really don’t care if I’m too sick; they care about food and I’m their human who gives them food.)

So, The Boy, as he’s called around here, arrived a little before 8 and Sam P. Spade, Secret Agent Angel, fell in LUV. Sam adores children and, come to find out, so does Gray Tom (although it could have been those nasty carrot mush The Boy was spitting out). I finally gave up on the carrots and popped a bottle in his mouth. Ahhhh. All is well and, while my back was turned, Sadie ate the carrots…loved ’em in fact! lol 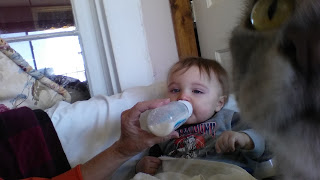 You might want to stop reading at this point…I’m going to talk to myself and ask hard, desperately hard, questions. If you have any sane or sage advice or comments, feel free to chime right in. If you disagree, please do so pleasantly because People, I am frightened. I’m frightened for all of us, each other, our way of life, children, veterans, elderly, refugees. These are frightening times and, I’m ashamed to admit, there are moments, very long moments, when I forget God knows all, sees the future and absolutely nothing happens that is a surprise to Him.

If you’re on facebook, perhaps you’ve seen those posts suggesting quite vehemently ‘you’ve no heart whatsoever if you question bringing refugees into the USA’, or, as one said, paraphrasing, “My religion demands I reach out to others” while another said, again paraphrasing, “those who would want to be in the White House think of refugees as Not Like Us”.

There were many more comments that were sometimes more acerbic in tone and all seemed intolerant to the possibility someone might have an equally valid, but opposite, point of view.

As to the “my religion demands” camp…therein lies a huge part of the problem. Religion. I’m reminded of Nancy Pelosi who seems to have absolutely no concept of relationship so she fell back on that tired old chestnut, religion. Yo, Nanc…my religion demands nothing; my relationship demands all. Yes, Jesus did say “love your neighbor“; He also said, “count the cost” and if someone didn’t welcome you or His message, leave and shake the dust off your feet.

Ah, we don’t want to hear or read that…count the cost or leave someone behind because they don’t want to hear His Gospel. No, we’d rather the suckling babe lying in the manger, totally dependent upon humans. We don’t want the God Man who will, at a time of His Father’s choosing, return to judge and make war. (put another way…there’s no reason for us to judge one another as that’s Jesus’ job.)

Dave’s voice is ringing in my ear…”So essentially people want you to choose between this child you’ve held in your arms or someone else’s child?” Harshly put but financially speaking…yeah. 100,000 refugees will be housed in the USA according to John Kerry in an Aljezerra article. By his own admission, there isn’t a plan in place. Put another way, the plan is to bring 100,000 refugees to the USA and feed, house, clothe and give medical care. And what about the folks who live here, have been paying taxes here and who are struggling to pay their bills, have little or no health care, etc.? What about them?

Can you even conceive of the number 18 trillion? I can’t but if it’ll help, start counting now and when you’ve finished, 31 thousand years will have passed!

According to this site, it’ll cost almost $260,000 a year to house, feed, clothe, give health care to a family of 5 refugees. Why aren’t the Gulf States offering asylum? Interesting question, don’t you think? But, back to us…are you willing to go without…food, shelter, clothing, medicine so a refugee can have it? Are you willing for your taxes to increase? Are you willing to house refugees…in your home? Are you willing to take from your child or children and give to another child? Hard questions and easy answers are not compatible; never have been, never will be but this is Sophie’s Choice…for real.

Another salient thought I have is, “where are all those people crying for refugees when more than 2,200 babies a day are being aborted? or there are 50,000 homeless vets? or 1 in 5 children hungry? or 1.56 million other homeless? or those enslaved in sexual trafficking (the fastest growing global crime)?

I will not take food, shelter, clothing, medicine from the babe in my arms to give to another.

I expect the government of the USA to heed the Constitution to protect We, the people…at whatever cost.

I will give to the Salvation Army to help those beyond me and I will also heed how Jesus lived…He preached to thousands at a time but He touched only one at a time.

I can do no more.
You who are without sin, cast the first stone.

Share
Pin
Email
« So, What Do You DO All Day?
On Thanksgiving Day, I went shopping at Walmart…TWICE! »