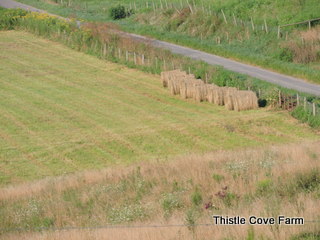 Keeping in mind the Sabbath was made for wo/man, this past Sunday saw me moving hay from the meadow into the hay lot. Donald and Dalton came by to get hay for their horses and Donald said, “Well, while I’m here, let’s move some hay.” With him in the truck, pulling the trailer and me on the tractor, we moved about half the hay and he left with 2.5 round rolls stacked on the trailer and another in the bed of his truck. 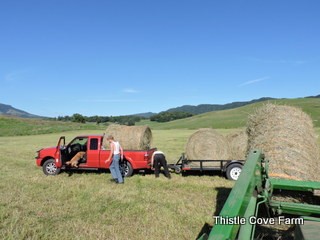 While moving the hay, I would load 2 rolls on his trailer and one in his truck bed. It took a few loads for me to get comfortable with a roll on the front spear and on the back spear. When moving hay into the hay lot, it was very dicey due to the lot being on a hill and with ground hog holes. Donald would stand at the worst of the holes so I wouldn’t tip the tractor over and be thrown off. 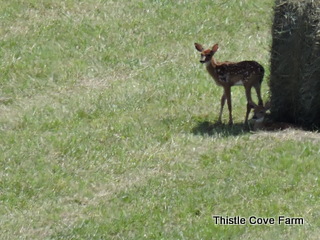 ~ doe and fawn, round bale shade ~

I’m so short, I have to sit on the edge of the tractor seat so I can reach the pedals and, even then, my knees ache like a toothache when I’m finished. The angle of my leg puts a lot of stress on the knees and it simply cannot be avoided. And, yes, the seat has been moved as far forward as possible. Monday, early evening, I moved the rolls from field center to field side; this prevents dead spots in the field. 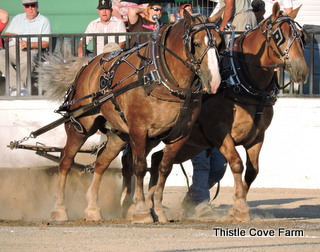 Monday evening I visited the Tazewell County Fair to watch the Belgian pull teams and they were fabulous! Unfortunately, someone got confused in the office and messed up the scheduling so there were only four teams showing. There are usually a dozen and the pull goes on well into the dark of the evening. These animals are magnificent! Were I starting over, I believe I’d go straight to the draught horses…the English Shire (of which Her Majesty is the Patron) or the American Cream or the Gypsy Vanner. An acquaintance owns Silver Feather Gypsy Vanner Horse Farm and has incredible horses. 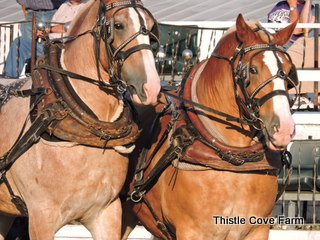 Wednesday I headed to Rural Retreat and Duchess Dairy for Jersey cream, milk and yogurt drink. On the way, I stopped off at The Dutch Pantry (Facebook page only) for lunch and home made sausage. 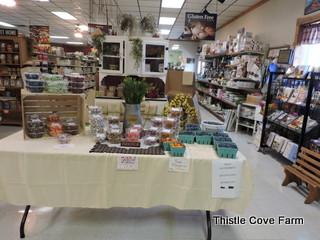 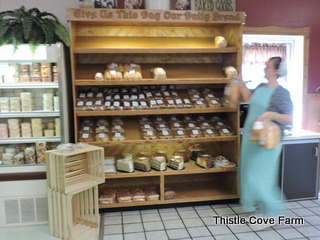 ~ putting out freshly made bread ~

From the Duchess Dairy website, “The facts show that Jersey milk taste better; Jersey milk is more nutritious; and the Jersey cow is friendly to the environment. She has a carbon footprint that is 20% smaller than that of the Holstein (black and white) cow and it takes 32% less water and 11% less land to produce cheese from her milk.” As an aside, Jersey cows are known as Alderneys and date from the 15th century from…yes really…the Isle of Jersey off the coast of England. Jersey has 4.9% milk fat and 3.8% protein vs 3.7% milk fat and 3.2% protein of Holsteins.

Holsteins comprise about 90% of the national dairy industry and even though their milk is of lesser quality they produce more gallons per milking, more than 8 gallons per day. Also, the government, God bless ’em!, decided We, the People were too stupid to control our own dietary habits and slowly, yet surely, moved dairy herds away from Jersey to Holstein. (Frankly, considering the huge numbers (no pun intended) of American people who are obese, the government, this time, may be right.) The 1935 U.S. Census of Agriculture estimated there were 23 million dairy cows in the US. 42% were Jersey, 40% Holstein, 16% Guernsey  (4.7% milk fat and 3.6% protein), 2% Ayrshire and 1% Brown Swiss (4.1% milk fat, 3.5% protein).

Does all that really make a difference? Absolutely! In taste, cooking, baking and in churning butter. Which is what I did today; I demonstrated churning butter and from 2 gallons of pure Jersey cream, I made 10 pounds of butter. I’ll show photos and explain in another post but suffice it to say I did it the Old Fashioned Way…by hand. As the cream thickened, my dasher broke and I ended up making butter in an enamel bowl using only my hands (which now feel like incredible due to being in butter fat all morning). 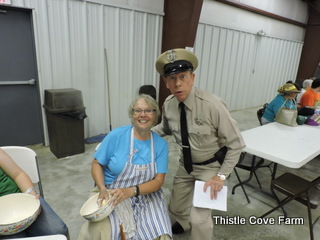 One last photo…”The Mayberry Deputy: David Browning” entertained today (Senior and  Special Needs Day) and was a delight. I watched as he worked the room and young and old alike, sometimes impatiently, waited to have their photo taken with him. You may remember Deputy Sheriff Bernard (Barney) Oliver Fife played by Don Knotts who was born in Morgantown, WV where Dave went to University.

Right after this photo, he said, “Do you remember the episode where Aunt Bea dated the egg and butter man? Andy said, “He buttered her up and she egged him on!”” Gosh, I loved Andy of Mayberry and miss those simpler comedies where we laughed belly laughs at such silliness. To watch the first pilot, click here and for more information click here. Andy was from North Carolina and Mt. Pilot was Pilot Mountain, is close to Mt. Airy (Andy Griffith’s birthplace) which was known as Mayberry in the television series.

Oh my yes. Good times, good days, good memories. Until next time, when I show you how to make butter and buttermilk and maybe even cat head biscuits.

Blessings ~ so many, where do I start…home made butter ~ David Browning who gave so much joy today ~ draught horses ~ hay ~ doe and fawn ~ Donald and Dalton ~