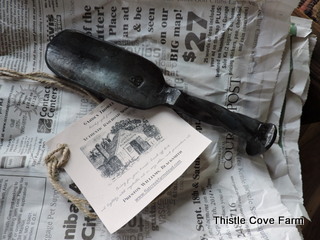 Do you know Tammy, Flat Creek Farm blog? Recently she posted Mr. W was back in the blacksmith shop, making, among other things, trowels out of railroad spikes…yes, railroad spikes!  Tammy gave the address of Mr. W’s etsy shop so I hied myself there quick like a bunny and found the above.

To misquote Keats, a thing of beauty and a joy forever. I’ve asked Abba if He’ll permit me to have this in Heaven so I can garden properly. It’s perfectly made…fits well in my hand, has a slightly angled, sharpish edge for digging and it has a PW for maker’s mark…Mr. W’s initials. I only tell you about this now because, let’s face it, once those railroad spikes are gone, they are g.o.n.e. Also, (selfish wench me) I wanted to make sure mine was in hand before I let the world know; they are sure to fly off the shelf, er, out of the shop. Do you know a gardener? This is the absolutely perfect gift for that gardener and s/he is sure to be the envy of their garden club!

Tis the season for craft show and fairs; recently I saw Mr. D who makes things of wood. Beautiful, useful things of wood that I’ve bought and given for Christmas gifts in years past. 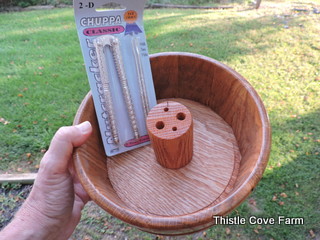 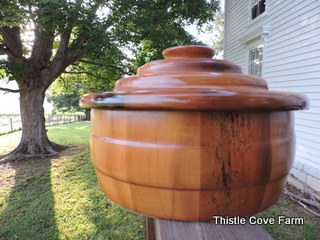 as well as very large bowls with beautifully fitting lids. He also made a marvelous jewelry box which I’ll photograph later and show you.

“An intellectual says a simple thing in a hard way.
An artist says a hard thing in a simple way.”
~ Charles Bukowski ~

There was a little craft show in the county seat today and one vendor stood out above the rest. I stopped in my tracks when I saw these young folks who are just getting started. When I asked for a business card…no joy. When I asked the name of her business…no joy and she said, “We’ve been thinking about a name but haven’t come up with one. My name is Sarah and his name is Seth and we’d like to, somehow, combine the two. If you have any suggestions, we’re open.” 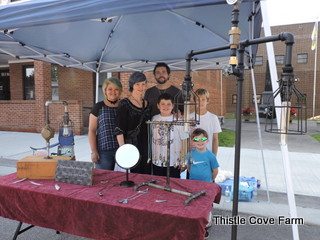 ~ Sarah Jane and Seth are in black shirts ~

She took my notebook and wrote her name, e-address and phone number then handed it back to me. I looked at what she’d written and exclaimed, “You’ve got the perfect name for your business…Sarah Jane Designs” is what I thought of then but now I’m thinking… SARAHJANE Designs or SarahJane Designs or SARAHSETH Designs or SarahSeth Designs!” Actually, I don’t think I said ‘designs’ but it was in my head. (I run into that a lot, stuff in my head that doesn’t make it out of my mouth. Then again, far too frequently the exact opposite happens and then I’m done for.)

What do you think would make a good name for them? They do steampunk, repurposing and quotes on wood. The twin light above is made out of leftover bits and bobs and if I’d needed a lamp, it would have come home with me. 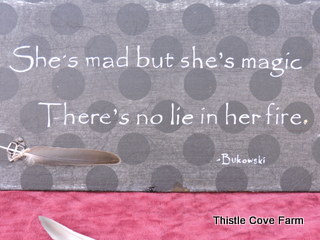 Lovely Bukowski quote…I like Bukowski but haven’t found many people who know him and, must admit, was shocked, pleasantly so, to find him on Main Street. His poetry could sometimes be dark but then, isn’t life sometimes dark? (As an aside…in support of my decision to live behind locked gates he wrote, “Do you hate people? I don’t hate them…I just feel better when they aren’t around.” —yessssss!—) (update note…I don’t hate people but I do better when the fewer the better. I’m not good in crowds…INTJ doncha know? and tend to want to take over…which isn’t greatly appreciated by some -grin-) 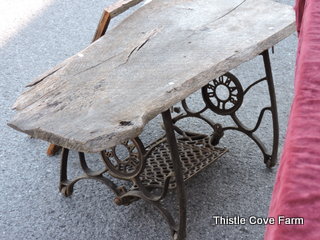 Do you think this would make a marvelous television table? Sarah said she enjoys steampunk and re-purposing things. In my day we called that “use it up, wear it out, make it do or do without” then “reduce, reuse, recycle” came along and now it’s “the 5 R’s…refuse reduce reuse repurpose recycle“.

Whatever. Just do your bit.

On Pinterest I found Reduce + Reuse + Recycle here and left in a hurry as I could loooooosssseeee myself on this page! In England it was called Make Do and Mend, which I also like. 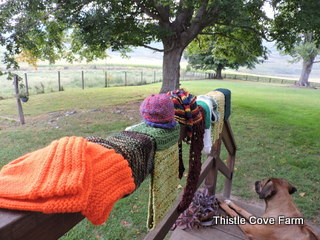 In addition to prepping for winter, I’ve been busy doing this and that…knitting strewn on the porch railing…orange hats and orange cowl for hunters, followed by a green camo cowl for a hunter, then a cotton green scarf with a tiny baby hand spun, hand dyed woolen hat sitting atop and the wildly yarned hat has bells hanging off. I knitted one for my sister and she wears it on her school bus runs and her “children” find it highly amusing. Steph, my sister, is a wonder! She’s been a bus driver for decades and says it’s her calling to bring a bit of saneness, love and joy into the lives of “her” children. She’s been at it so long, she’s now driving the grandchildren of the children she started driving. Hmmm, does that make sense? 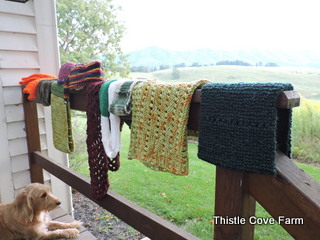 Now, coming from the other end…a dark green acrylic 0 scarf, meaning it was joined and has no beginning nor end, but isn’t a true mobius. Next is another cotton cowl, then a fat woolen circle that’s going to be felted and used to warm my French press coffee press. The next is a green/white scarf then a wool throat scarf. 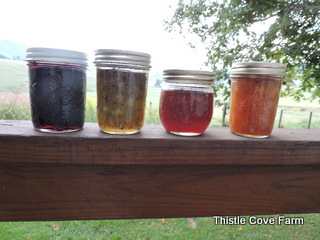 From my farmhouse kitchen comes blueberry jam, kiwi jam, strawberry jam and peach vanilla preserves. A taste test pronounces them all very delicious especially on my cat head biscuits or my cornbread, both made with buttermilk gotten when I churned ten pounds of butter a couple of weeks ago.

In the slow cooker now are apples, sugar and spices that will, sometime tomorrow, make a few pints of apple butter. (You would not believe how good the house smells!) I ran out of time but was going to make ricotta cheese today; perhaps tomorrow I’ll make that cheese and an apple cake whose recipe was given me by Aunt Esther and is incredibly tasty!

“The free soul is rare, but you know it when you see it – basically because you feel good, very good, when you are near or with them.” ~ Charles Burkowski ~

Do you wear aprons? Grandmother B, wore pinafores, true pinafores, and those are the aprons of my childhood. She also wore flannel nightgowns and I still have one or two that remind me of her…plain, serviceable and heavy duty for these cold Appalachian winters. 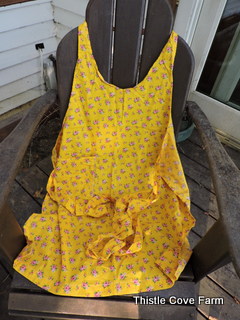 This pinafore apron was made by a six months from 95 year old woman who passed away unexpectedly. Her daughter was selling the aprons because “Mother made them to sell and that’s what I’m doing.” I bought several, this bright, cheery yellow one is going to someone who leaves a comment answering “do you wear aprons and if so, what kind?” I’ll take comments until Thursday evening, say 5 and then draw a name via random.com and announce in a new post with more photos of aprons the old lady made.

Now. Back to the Two Fat Ladies of my last post…Clarissa Dickson Wright died at age 66 in March 2014 while Jennifer Patterson was first to die in August 1999. They traveled Great Britain in a antique Triumph motorcycle, dropping in on pony clubs, men’s choral groups, abbey’s and various other groups to make wonderful meals in kitchens not their own.
Jennifer wore rings…lots of them, while prepping and making food and it was a hoot to see her long, blood red manicured nails dipping into a mess of something or other!  They were fabulous cooks…long before Emeril sang out, “Pork fat rules!” these two women were using lard, pure butter and other things the food police have since declared “very bad for you”. I’m of the opinion no food is bad for you, it’s the lots and lots of food that’s bad for you. Then again, both of the Two Fat Ladies were…fat and unashamedly loved their cooking and their food! As did Prince Charles from this account. Both were very interesting women who lived life deeply and, off and on, quite well. Finally, if you’d to see a tribute to Jennifer, click here.

Another aside…there are many, many reasons to love Two Fat Ladies and one of mine is I recognize so many places they go…Kylemore Abbey, Smithfield Market, Connemara and many other places…what great memories!

P. S. For the giveaway, you MUST leave a way for me to contact you…either leave your e-address in your comment or a link to your blog. Several have left comments but their settings are NO-REPLY and that’s not good. If you win…there’s no way to let you know.