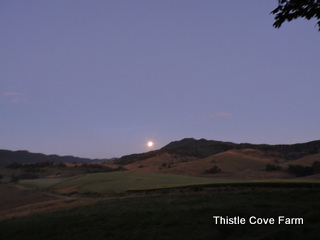 Just before dawn the last blue moon until January 2, 2018, as it disappeared behind the mountain. 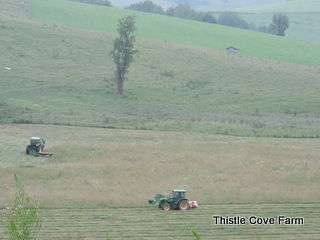 Daddy John and Daniel found a few days window of no rain and managed to get my hay field mowed, tethered, put into wind rows and then baled into 5×5 bales. My upper meadow will be done same this coming week and perhaps another ten or dozen bales to be given half to the cutter and then my half sold. 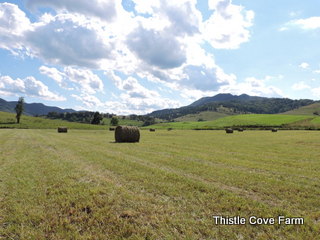 One of the prettiest sights, to my way of thinking, and at this stage of life, is a hay field with freshly cut, newly baled, dry hay. 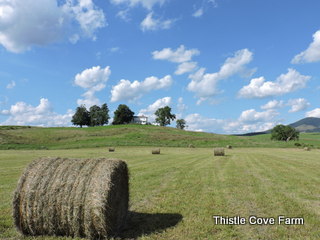 Depending on my count, which changes each time, the round bales totaled either 28.5 or 29.5 or 30.5. I’ll know for sure once I move them from field center to field edge in preparation of moving them to the hay lot near the barns. 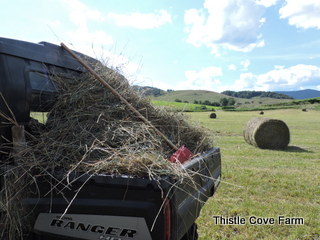 Each year, after the men finish haying, the dogs and I take the Ranger so I can glean hay from the field. It’s silly enough but it pleases me and the horses like having a change in their diet. 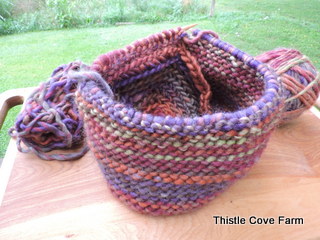 During the mornings, while listening to Youssef and Begg, I’m working on a bowl or nest, ala Vicki at 2 Bags Full. This yarn is more like roving, made in Peru (if memory serves) and knits up beautifully. The bottom is crochet and is being attached to the knitted bowl with knit stitches; once finished, it’ll be felted and, in similar manner, turned into a nest with my own little touches. I don’t have a pattern but am relying on old fashioned brain power (can you imagine the burning of my little gray cells?) to figure it out. As Agatha Christie had Poirot say, “It is the brain, the little gray cells on which one must rely. One must seek the truth within–not without.” As an aside, JOY JOY JOY, this summer filming began of Tommy and Tuppence, another of Christie’s books. On BBC ONE, a few nights ago, you could view And Then There Were None which was called, I believe, Ten Little Indians when Christie first wrote it and worth seeing if only for the scenery. Although, we all know the acting will be stellar and the clothes fabulous. (I suppose the PC police got their shorts in a twist and had the name changed from Indians to None. Seriously, “those people”, those PC people, haven’t any sense of humor and are as rigid as a flag pole!) Partners in Crime, is another title for the Tommy and Tuppence series filed in the 1980’s. If the new films are as good as the old ones, they’re to be highly recommended!

Recently, the first three parts of Parade’s End have entertained me although it’s also brought a keen sense of ennui into my life. The main character, Christopher Tietjens, reminds me so much of Dave; both honorable, respectful men, always doing the right thing as they provide for and protect their women, their home and their country. The actor, Benedict Cumberbatch, has been in a lot of roles…Sherlock (fabulous!), The Imitation Game (bittersweet), The Hobbit (didn’t see but I’ve heard his voice as Smaug) and a theatre production of Hamlet and Star Trek Into Darkness released this summer (I think).

Anyway, if you like Downton Abbey, you will probably like Parade’s End and the first three parts are on Netflex, whereas the sixth and final season of Downton Abbey doesn’t come ’round until January 1.

Summer is full of work, work, work keeping me busy, busy, busy and out of trouble. By the time I finish either on the farm or in the house, it’s time for supper, shower and sleep. Speaking of, I’m only one third of the way so shall close.

Be safe, keep busy and no whining…okay?
It’s terribly unattractive.