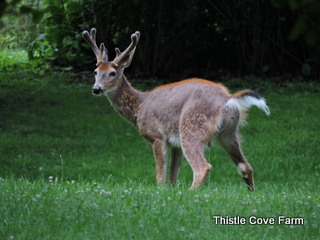 The above photo hasn’t anything to do with dogs or blue or moon but it could be argued it is a magical. Let’s face it: have you ever seen an antlered male (or any gender) deer urinating? It’s rare and this is the first time I’ve ever seen, or captured in a photograph, such a sight. Dear God, thank YOU for nature…I LOVE IT!

As an aside, I don’t doctor my photos as (1) I’m too lazy, (2) because pretty is as pretty does, (3) it’s fake, false, faux, (4) time is sorely limited. On rare occasions I will crop a photo with key word being rare. Heck, I barely have time to post two or three times a week and have to choose wisely where my time is invested. 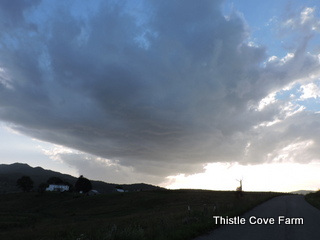 At Thistle Cove Farm, we’re firmly in the grips of Dog Days leading to a Blue Moon on July 31st. If you’re wondering, dog days are between early July and early September, but usually ending by late August when the heat of summer is stultifying and the humidity threatens to suppress deep breathing. (Thank God, yet another reason to put off yoga or any other form of exercise save walking in the cool (being a relative term) of the evening.) 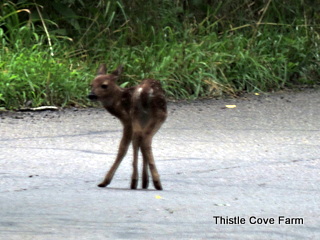 Anyway, back to dog days. In the millennium of yesteryear, the ancients would connect the dots of the heavenly stars and come up with bears, dippers, bulls, twins and any manner of beings. Mind, this was before light pollution but at Thistle Cove Farm, during each months darkened nights, such sights are still readily seen. Many nights, much to the dog’s dismay, I go for a walk at 0:dark thirty simply to hear the nightingale sing and to see the diamonds of the Milky Way cast across the night sky. I can imagine God, shaking a handful of stars in preparation to slinging them away from Him. Much like those ejits do when playing roulette or dice or some other form of “entertainment” designed to separate fools and their money.

Canis Major, the big dog, is Sirius (yes, that is where XM radio got their name) and it is the brightest star in the southern night sky. In summer, Sirius rises and sets with the sun and in late July, is in conjunction with the sun thus leading the old timers to believe its heat (brightest star = heat) made sultry and hot weather. The period 20 days before and 20 days after this conjunction are the “Dog Days of Summer” and are generally between 3 July and 11 August. 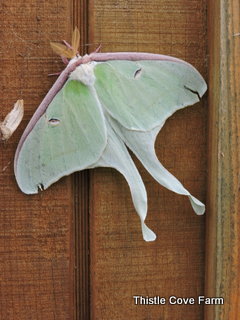 On the 31st of this month, hopefully we’ll see (as in no cloud cover) a Blue Moon, meaning the second full moon of the same month. A full moon is when, in this order, the sun, earth and moon line up and the light of the sun shines directly onto the moon. I’ve read it’s also when lunar energy is most intense, whatever that means. There are all kinds of sayings regarding both moons…”take back control of your life”, “it’s a magical, mystical time” and so forth but I say if you’re waiting for a full or blue moon to take back control of your life, well, it’s no wonder your life is in a mess. In the first place, never give up control of your life (unless it’s to Jesus) and secondly, if you do give up control (unless it’s to Jesus), take back control ASAP and don’t wait for the moon to do her thing. I mean…seriously folks, we get one shot at this thing called life so make it count. 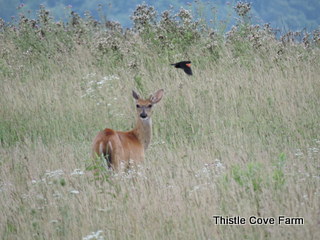 This button buck, meaning it’s a young male with antlers beginning to grow, was being dive bombed by a red wing blackbird; their antics were amusing to watch.

In the morning, some of the barn cats sit in the window, waiting on breakfast. I try to finish outside chores by late morning then do inside chores until late afternoon. Sometimes the plan comes together but on days like today, when the temps are in the 90’s and the heat index is nasty, even working inside produces rivulets of water dripping down my body.

It’s dog days with a vengeance and 11 August looks a long ways off.