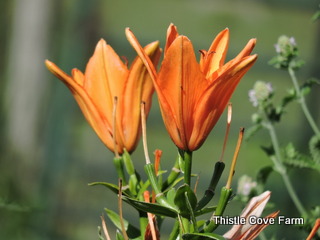 As I don’t have marigolds, day lilies will have to do as I’m watching The Best Marigold Hotel and recognize so many actors from other venues. Penelope Wilton, played Isobel Crowley in Downton Abbey, again playing a crotchety, disagreeable old woman who does not deserve the wonderful husband she abuses. Eventually, she figures it out and makes changes to propel both she and her husband forward even if separately. No, this isn’t a recommendation for divorce…it’s a movie…

Then there’s Maggie Smith, aka Dowager Violet Crawley, another very, very crotchety old woman who is also disturbingly vocal in her dislike of Indians. Yet, as the movie plays on, we finds out she’s been “let go” with no ceremony, after years, perhaps decades of being in service. A younger woman has taken her place and she’s been put out to pasture, unwanted, unloved, un-cared for and totally at sixes and sevens. It’s sad and I weep for her because I know her. I know many such women and men and sometimes, sometimes, they figure out a way to go on and go on successfully. 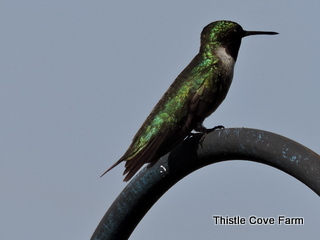 Judy Dench is someone who makes the best of a bad situation and, in this movie, does it beautifully ending her part in the movie “happily ever after”. I do like her clothes though…all cotton and linen and she’s about the only one who dresses for the city and the weather. Smart woman.

If you’ve seen this movie, no doubt your mileage differs; please tell me how. 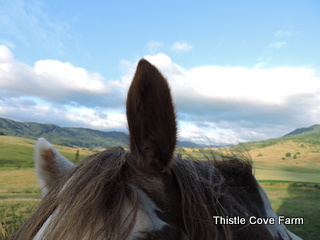 I’ve always wanted to visit India, particularly Jaipur where the movie takes place, but there are so many other places I want to see first…Wales, Scotland, Ireland (again), Mongolia, then, maybe India. But OH the textiles…that would make India totally worthwhile…yes? The Kantha quilts are lovely and the next quilt I make, I want to do it in the Kantha style. 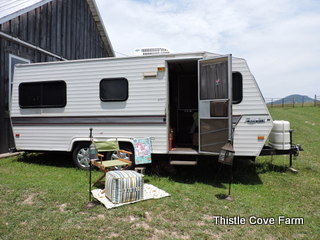 Mom and Dad wanted to go to Niagara Falls so a camper was purchased. It’s a 19 foot something or other that’s no longer being made but is extremely suitable. 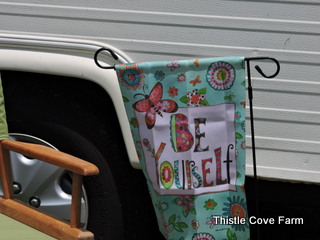 The flag is to remind me to be me. Silly, eh? 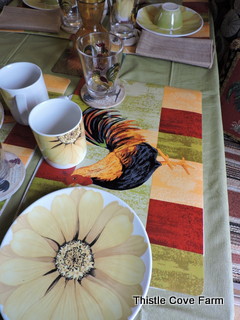 Table seats four and the Mikassa dinnerwear is vintage. 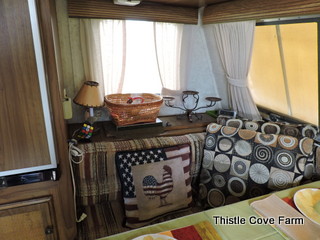 Banquet seating that breaks down into a double bed. The kitchen area has a rooster theme…cute, eh? 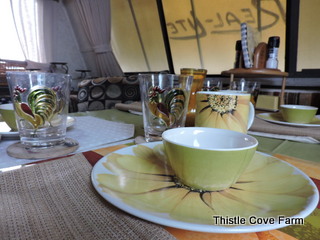 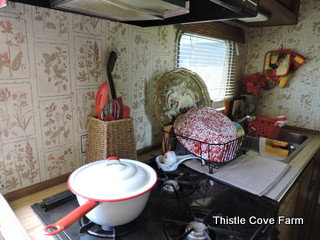 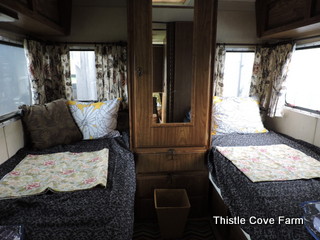 Twin beds in the bedroom, the fabric on the bed will be used to make quilts for each bed. 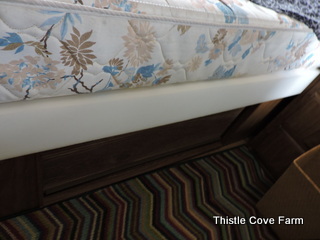 The mattresses were in good shape but I purchased five inches of foam to put underneath them…which will make a wonderful nights sleep. 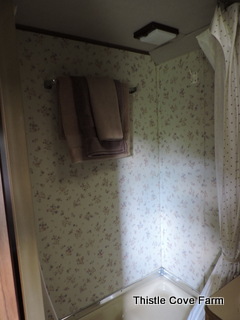 I’ve sailed a 36 foot yacht with a shower about this size. 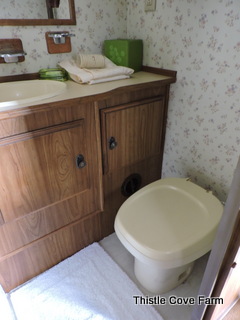 toilet with lots of storage. 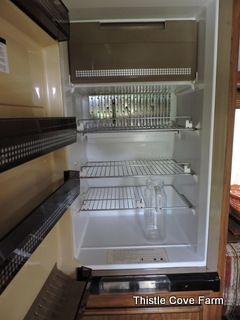 A refrigerator a tad larger than a college dorm size.

Now, all this lovely, fun stuff and my parents can’t go due to Dad’s surgery. He’s had complications and a trip to Niagara isn’t happening this year. Still, I’ve had a lot of fun simply sitting in the sun, outside the camper, planning trips to come. And, should those trips not happen, I’m thinking this might be a nice farm stay camper. What do you think? 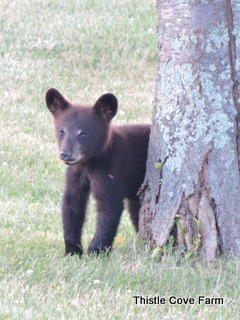 Recently, I was at Gina and Steve’s house and we were visited by babies…twin bears! I’m not sure where Mom was but, to be sure, she wasn’t far. I think it’s a bit like humans…one child will stay put and do what they are told whereas two children will get into mischief so the babies ran off. 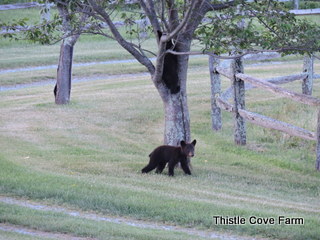 They were wandering around the front yard and when I stepped onto the front porch, began scrambling up a tree before scrambling down and running across the road. 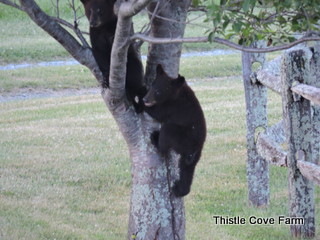 which way…which way??? Cute as all get out and just more of God’s creation we see in this lovely valley. 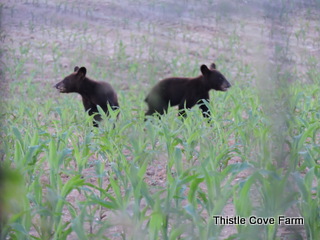 And, almost lastly, this is what one of the cats left in the sun room for me. Daddy John said he thinks it’s a copper head; I know for sure it’s a dead copper head. whew! 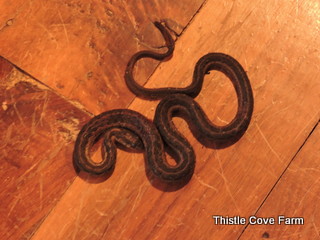 In more than twenty years, this is the second snake I’ve seen on this farm; the first was a green garden snake. 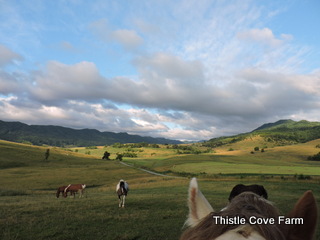 The first photo in this post was taken the same time as this photo…beautiful, simply beautiful. A storm blew through on Friday and Saturday, leaving crystal clear weather, mid 50’s temperatures feeling like early September…break your heart beautiful!

As they said in the movie, “Everything will be all right in the end, and if it’s not all right, it isn’t the end” or as I like to say…God has a plan and that’s a good thing because these are trying times. Tempers are running high, emotions are out of kilter, people are being mean, neither side seem to be very tolerant. People, listen up…it’s okay to have differing opinions about, well…everything but what’s not okay is to turn nasty. Please don’t show hatred or even unkindness; if necessary, remove yourself from the situation and walk the other way. If you’re a Christian, turn the other cheek and show Christian love.

Blessings ~ on all God’s people, saints and sinners alike ~