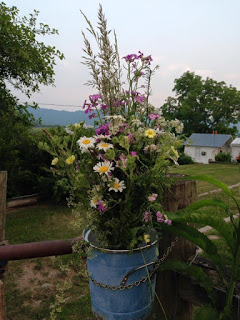 ~ Welcome! ~
Some folks go to the florist or grocery store; I drive down the road, Mason jar and scissors in hand and pick a bouquet for the gate.
As Susan Branch says, here’s a little musica to set the mood. This week has been grand; lots of sunshine, lots of warm weather, 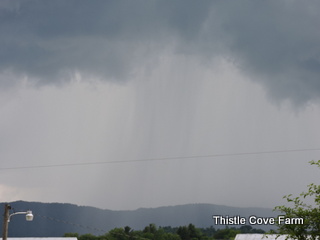 ~ do you see the sheet of rain in the middle? ~

some rain to help things grow, 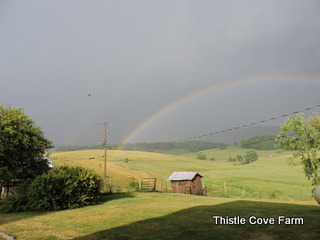 ~ double rainbows, ending in my pasture! ~ 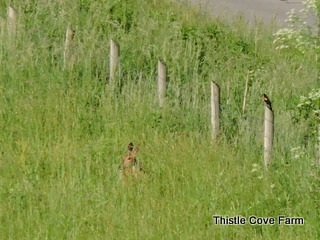 Early in the week, a deer was spotted in the side pasture. Apparently, s/he was a little too close to someone’s nest because they started dive bombing. First one, then the other, would swoop in about the ears and, eventually, the deer scampered. 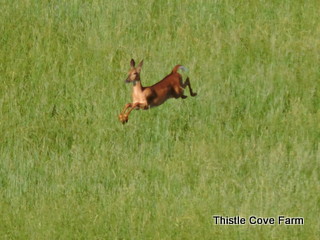 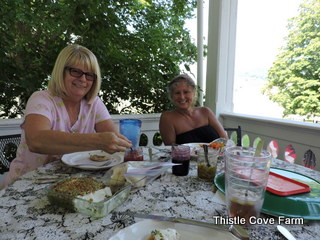 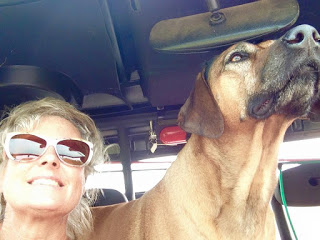 One of the best gifts I’ve ever received was a visit this week from Vicki of 2 Bags Full. Vicki and I have known each other for years and it was at her Florida property Dave and I had a respite just days before he unexpectedly died. This week, Vicki and I met for the first time and, truly, it was like being, again, with a friend of decades whom I’d not seen in a long while. Vicki is everything one could ask for in a house guest; she loves cats, loves the dogs, loves the horses, loves me, smile 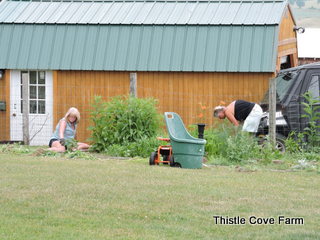 AND SHE AND MARSHA WEEDED THE VEG GARDEN!!!! No one was threatened or harmed, it was an act of LOVE and words fail me at saying how greatly appreciated. Now I can get in a few more tomato plants, herbs and maybe a squash or three. In true Vicki fashion, “no big deal” but, yes, it was, and is, a Big Deal. It would have taken me all day if not two and they did it in a couple of hours. THANK YOU! 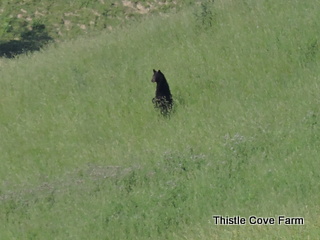 They left, all too soon, and missed the black bear heading home this morning. 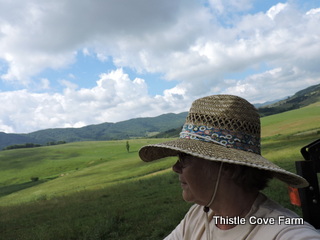 They also missed learning how to drive the tractor; several times a week, early morning after dew is off the ground, I mow thistles in an attempt to keep them under control. I dislike using chemicals and weed control is by tractor and old fashioned swing blade. 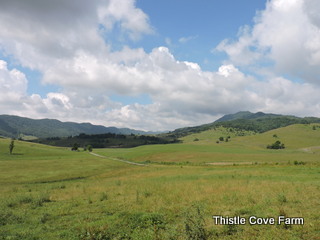 Walking on sunshine…another beautiful day on Thistle Cove Farm and tomorrow is sure to be perfect.