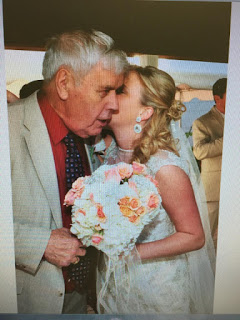 ~ Katie and Daddy, her new FIL ~
“And Adam said, This is now bone of my bones, and flesh of my flesh: she shall be called Woman, because she was taken out of Man. Therefore shall a man leave his father and his mother, and shall cleave unto his wife:
and they shall be one flesh.”
~ Genesis 2:23-24 ~

“The Supreme Court of the United States has ruled today that same-sex marriage is legal in all 50 states. With all dues respect to the court, it did not define marriage, and therefore is not entitled to re-define it.
Long before our government came into existence, marriage was created by the One who created man and woman – Almighty God – and His decisions are not subject to review or revision by any manmade court. God is clear about the definition of marriage in His Holy Word: “Therefore a man shall leave his father and his mother and hold fast to his wife, and they shall become one flesh” (Genesis 2:24).
I pray God will spare America from His judgment, though, by our actions as a nation, we give Him less and less reason to do so.”   ~ Franklin Graham ~
“No woman wants to be in submission to a man who isn’t in submission to God.”  ~ T. D. Jakes ~

“If I get married,
I want to be very married.”
~ Aubrey Hepburn ~
“The older I get, the less time I want to spend with the part of the human race that didn’t marry me.” ~ Robert Brault ~

“The best time to love with your whole heart is always now, in this moment, because no breath beyond the current is promised.” ~ Fawn Weaver ~

“A happy marriage is the union of two good forgivers.”
~ Ruth Bell Graham ~
“Once we figured out that we could not change each other,
we became free to celebrate ourselves as we are.”
~ H. Dean Rutherford in a letter to his wife on their 59th wedding anniversary ~
“Coming together is a beginning;
keeping together is progress;
working together is success.”
~ Henry Ford ~
“Love is an ideal thing; marriage a real thing.”
~ Goethe ~
“Marriage doesn’t make you happy –
you make your marriage happy.
~ Drs. Les and Leslie Parrott
“There is no greater happiness for a man than approaching a door at the end of a day knowing someone on the other side of that door is waiting for the sound of his footsteps.”
~ Ronald Reagan ~
“There is no greater risk than matrimony.
But there is nothing happier than a happy marriage.”
~ Benjamin Disraeli ~

“Your priorities aren’t what you SAY they are.
They are revealed by how you live.
What does your life say
about the value of your family and marriage?”
~ Marriage Today ~
“And He answered and said unto them, “Have you not read that He who made them at the beginning ‘made them male and female,’ and said, “For this reason a man shall leave his father and mother and be joined to his wife, and the two shall become one flesh”?
So then, they are no longer two but one flesh.
Therefore what God has joined together,
let not man separate.”
~ Matthew 19:4-6 ~