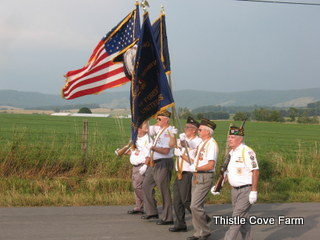 “I stand fearlessly for small dogs,
the American flag, motherhood and the Bible.
That’s why people love me.” ~ Art Linkletter ~


“The American flag is the most recognized symbol of freedom and democracy in the world.”
~ Virginia Foxx ~


“The American flag is the symbol of our freedom, national pride and history.” ~ Mike Fitzpatrick ~
“We identify the flag with almost everything we hold dear on earth, peace, security, liberty, our family, our friends, our home. … But when we look at our flag and behold it emblazoned with all our rights we must remember that it is equally a symbol of our duties. Every glory we associate with it is the result of duty done.” ~ President Calvin Coolidge ~

“Sure I wave the American flag. Do you know a better flag to wave? Sure I love my country with all her faults. I’m not ashamed of that, never have been, never will be.” ~ John Wayne ~

Share
Pin
Email
« Welcome to Thistle Cove Farm; Thanks for Stopping By…
Siochain agus Farisinge with the Three Graces »