On Thursdays, TexWisGirl hosts Good Fences at The Run*A*Round Ranch and since I’ve got the great fence under water photo, decided to link along. As an aside, some years back I used to live in Richmond, VA where there was a restaurant called Texas-Wisconsin Border Cafe (now closed) but were well known for good food, especially chili and Legend beer. (My mind slips, quite easily, from something to nothing, wouldn’t you agree? Rather like those several, many, a lot of folks who come to mind because they are as substantial as fog and twice as vague. For some, holding onto a thought is as tenuous as chewing an oyster.) But I digress. 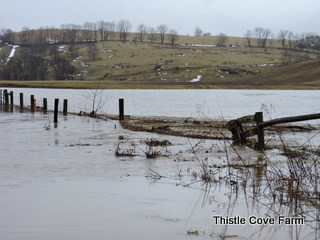 Yesterday, temps were well above freezing, perhaps even in the 40’s and most of the snow melted. This morning, it’s been sleeting since before dawn and shows no sign of stopping…today. The road that’s under water is now under sleety ice and water and is life endangering but the only people out today are those who have to go to work, using SUV’s, and neighbor’s on tractors. Still, it’s dangerous and, on days like today, I stay on the farm; no need to add another potential wreck to the treacherous mix.

The dogs have been having a gay ole time, dragging the two hind legs of a deceased deer around the yard. Perhaps some would look askance at such but it’s a farm, they are dogs and 1 + 1 = 2. Maybe that’s a giant leap for some but an easy stroll for me and for a lot of other farm dwellers. I saw Daddy John yesterday and he said one of last year’s fawns was in his barn and looked half starved so was given feed.  The deep snows have been dreadful in length (more than two weeks of deep snow on the ground) and a lot of wildlife simply aren’t going to survive. 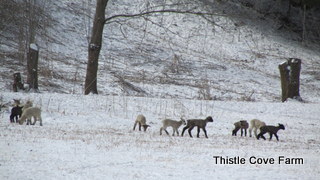 These lambs will make it, due to size and good health. They’re still on their mothers but have taken to going around in a pack of their own and will be weaned in a few weeks. 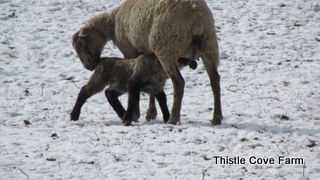 Dear Lord: I am quite ready to complain about the summer heat. Amen.

Blessings ~ still able after all these years ~ lambs and mothers ~ fences ~ sleet, because it’s got to stop sometime…right?! ~

Share
Pin
Email
« So Long, Farewell; It’s Good to see the Last of February!
A Lot of Something About Nothing Much »