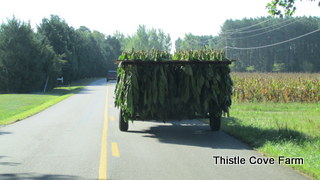 In central Virginia, folks still grow tobacco but it’s changed a lot since the days I used to work on my uncle’s farm. He grew acres and acres of tobacco and the entire family helped. The men would go to the field and strip the leaves from the stalk, load it on a wagon where it would be brought to the barn. My uncle’s oldest daughter, my cousin, would string and I would hand off. Meaning, I would take 3 stalks of tobacco, put them in one hand, smack the top with the other hand…to make them even…hand them to my cousin and she would string on either side of the tobacco stick. She could string as fast as three people could hand her tobacco and was absolutely amazing.

All this happened just outside the tobacco barn and as each tobacco stick would be filled with tobacco, the teenagers would stand at the ready to take each full stick into the barn and hang from the top of the barn down. A fire would be lit, and would stay lit, until the smoke cured the tobacco when it would be removed and taken to a central warehouse to be sold.

While we were working the tobacco, Mom and her sister were preparing lunch for all the workers, perhaps two dozen of us. There were family members, neighbors but most of the workers were black men and women and we all ate together, generally a couple of meats, lots of veggies, salad, biscuits, corn bread, a cake and a couple of pies…it took a lot of calories to keep everyone working.

Now, it’s done differently and I wonder if people feed workers anymore. When Dave and I were renovating the house, I fed the workers using a charcoal grill, Coleman two burner camp stove and a few coolers as refrigerators. They thought they’d died and gone to heaven!

Madge, at The View From Right Here, hosts a photo party and when I ran across the above photo, thought I’d tell the story. Have any of you worked in tobacco? It’s hot, nasty, dirty work but, when working in a crowd, it’s also a lot of fun. (That’s what I keep telling myself, especially as I didn’t get paid…I was family.)