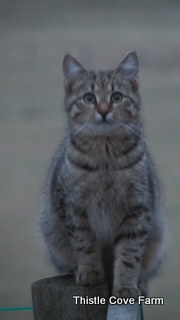 Nancy, at A Rural Journal, hosts Random 5 Friday “where you share 5 random facts about you, your day, your pets, your kids, whatever!”

1. Remember this kitten? He’s the little one I picked up on the side of the road when the “mean people” dumped him. For a long while, he was simply called “Kitten”; when I asked about names, Theo as in Theodore, was suggested as were Ted and Teddy yet none of those seemed quite right. One day I called, “Kitten, kitten” and he turned, looked at me and said, “That’s Kit Carson to you, Missy.” Ah, so it is…Kit Carson and he’s a mean lil’ cuss due to the fact he’s a kitten and terrorizes the household. 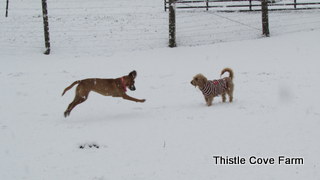 2. The dogs, at least Daisy, has enjoyed the snow…traitor! Temperatures were supposed to get above freezing today; someone should have mentioned it to Mother Nature. I believe today’s high was 31 which did little to melt the two inches of ice that was covered by a skiff of snow and made everything more than a little interesting. Thank God I didn’t fall but had several barely missed opportunities.

3. For the past few nights, I’ve been watching the first four episodes of Downton Abbey and is it just me or could anyone else smack that dreadful, conniving “ladies maid” O’Brian and Thomas, her sidekick? If it was Julian Fellowes intent to annoy the absolute socks off me, he has succeeded admirably. By the way, Mr. Fellowes was one of my absolute favorite characters in Monarch of the Glen; he was a tad peckish but played the part beautifully and remembered fondly. On March 12, Kate (why isn’t her name spelled Cate?) Middleton is visiting the Downton Abey set and will have photos taken with the staff. One presumes the staff of the set and not the staff of Highclere Castle (the real name of Downton Abbey); for more tidbits, visit Lady Carnarvon’s, the mistress of Highclere Castle, blog here. One last tidbit, Lord Fellowes also wrote Gosford Park, another English favorite and he received an Oscar (I believe).

4. I’m also a huge Midsomer Murder fan and think John Nettles, or the character he plays, Tom Barnaby, is a delight. Truth be told, I think he’s a hottie (or is that terrifically old fashioned term?) and I’m grateful he’ll never be the man that would make me move forward from Dave (wicked grin). If you’ve seen any of the Midsomer Murder episodes, you’ve heard that haunting music…yes? The instrument is called a Theremin and played by Celia Sheen here. The Theremin is the first electronic instrument and invented by Lev Theremin, a Russian scientist and the instrument is played without being touched! Ms Sheen uses her hands to make the sounds that cause the music…bizarrely beautiful…and did the music for the series for fourteen years! Click here for others who use this fascinating instrument. 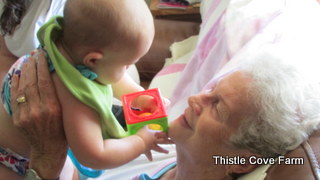 5. This is Mom with her first great-grandchild, my great-niece. Have you heard the saying, “A baby is God’s opinion the world should go on?” In these trying times, a baby, aside from God, is the only hope we have for the future.

P.S. One post next week, I’ll have a giveaway for a Pacsafe handbag. If you’re not familiar with Pacsafe, they are anti-theft and now, RFID secure bags, purses, wallets, etc. This particular bag is great for travel as it cannot be cut open; unfortunately, it’s not RFID secure but…it is free to the fortunate winner. More information and photos later.