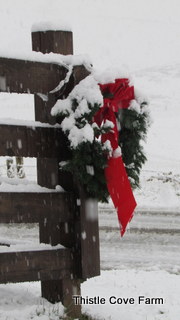 “Therefore the Lord himself will give you a sign:
The virgin will be with child and will give birth to a son,
and will call him Immanuel.”
~ Isaiah 7:14 ~
“The Old Testament is a book of
unfulfilled prophesies,
unexplained ceremonies
and unsatisfied longings
all of which are resolved in the New Testament,
the focus of which is Jesus Christ who fulfills in His life the prophesy,
explains in His death the ceremonies,
and satisfies in His resurrection the longings.”
~ Griffith Thomas ~

“And what kind of habitation pleases God? What must our natures be like before He can feel at home within us? He asks nothing but a pure heart and a single mind. He asks no rich paneling, no rugs from the Orient, no art treasures from afar. He desires but sincerity, transparency, humility, and love. He will see to the rest.” ~ A. W. Tozer ~
“When we give each other
Christmas presents in His name,
Let us remember that He has given us
the sun and the moon and the stars,
the earth with its forests and mountains
and oceans–
and all that lives and moves upon them.
He has given us all green things
and everything that blossoms and bears
fruit–
and all that we quarrel about
and all that we have misused–
And to save us from our foolishness,
from our sins,
He came down to earth
and gave us Himself.”
~ Sigrid Undset ~
“Adorned with craven gems and gold
The sages bore from eastern lands
Gifts for the tiny new-come King.
Came He with empty hands?–
Stronger than frankincense and myrrh,
There followed Him across the dark
The dawn-clean breath of better life
To fan the immortal spark.
And the stars greyed in the slow dawn;
The shimmer of the gold grew dim
Beside the deep far-shining light
That poured from Him.”
~ Carlton Culmsee,
Gifts of the First Christmas ~
“Love came down at Christmas,
Love all lovely, Love Divine,
Love was born at Christmas,
Star and Angels gave the sign.
***
Love shall be our token,
Love be yours and love be mine,
Love to God and all men,
Love for plea and gift and sign.”
~ Christina Georgina Rossetti ~

“The Second Person in God, the Son, became human Himself: was born into the world as an actual man–a real man of a particular height, with hair of a particular colour, speaking a particular language, weighing so many stone. The Eternal Being, who knows everything and who created the whole universe, became not only a man but (before that) a baby, and before that a foetus inside a Woman’s body. If you want to get the hang of it, think how you would like to become a slug or a crab.” ~ C. S. Lewis, Mere Christianity ~

“And it came to pass in those days, that there went out a decree from Caesar Augustus that all the world should be taxed. And this taxing was first made when Cyrenius was governor of Syria. And all went to be taxed, every one into his own city. And Joseph also went up from Galilee, out of the city of Nazareth, into Judaea, unto the city of David, which is called Bethlehem; because he was of the house and lineage of David: To be taxed with Mary his espoused wife, being great with child. And so it was, that, while they were there, the days were accomplished that she should be delivered. And she brought forth her first born son, and wrapped him in swaddling clothes, and laid him in a manger; because there was no room for them in the inn. And there were in the same country shepherds abiding in the field, keeping watch over their flock by night. And, lo, the angel of the Lord came upon them, and the glory of the Lord shone round about them: and they were sore afraid. And the angel said unto them, Fear not: for, behold, I bring you good tidings of great joy, which shall be to all people. For unto you is born this day in the city of David a Saviour, which is Christ the Lord. And this shall be a sign unto you; Ye shall find the babe wrapped in swaddling clothes, lying in a manger. And suddenly there was with the angel a multitude of the heavenly host praising God, and saying, Glory to God in the highest, and on earth peace, good will toward men. And so it came to pass, as the angels were gone away from them into heaven, the shepherds said one to another, Let us now go even unto Bethlehem, and see this thing which is come to pass, which the Lord hath made known unto us. And they came with haste, and found Mary, and Joseph, and the babe lying in a manger. And when they had seen it, they made known abroad the saying which was told them concerning this child. And all they that heard it wondered at those things which were told them by the shepherds. But Mary kept all these things, and pondered them in her heart.”
~ Luke 2 ~

If you have a name to add to the prayer list, please let me know.

Share
Pin
Email
« After a Brief Rant, Then Back to My Regular Fluff and Nonsense
Hooves, Footwear and Leather »