“Listen!
The wind is rising,
and the air is wild with leaves,
we have had our
summer evenings,
now for October eves!”
by Humbert Wolfe

There’s a last gasp on harvest and produce; we’re leaving red and heading into orange season so I decided to do something with cherry tomatoes. Dave told me…hmmm… memory is shaky but I think it was either General Patton or General Eisenhower used to read cookbooks to relax. I bet it was Eisenhower…can’t really see “George C. Scott” reading cookbooks, can you? grin Anyway, I adore reading cookbooks for inspiration, ideas and, sometimes, recipes. Although, I think recipes are suggestions and have never been married to one in my life. 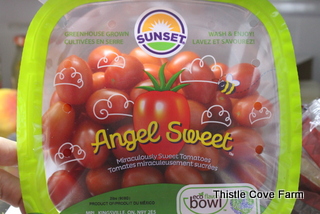 When I found some good looking cherry tomatoes, I brought them home and thought bout it for a day or two. I finally decided to slice them in half and put them into a shallow baking pan and sprinkled a few finely diced rosemary leaves over the top. 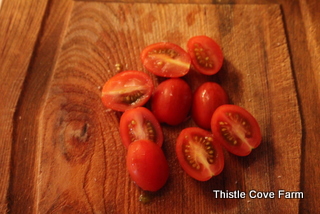 Some cracked pepper and sea salt were added, 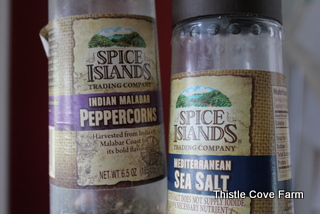 then everything drizzled with EVOO and put the pan into a slow oven to roast. It was left there for about 4 hours at 300 degrees F. which was long enough for the flavors to meld. 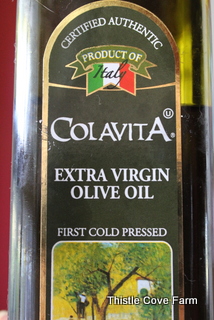 Meanwhile, I sliced up a small, rustic loaf of Italian bread and drizzled each slice with EVOO. 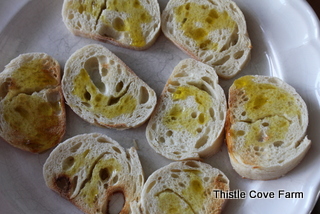 When the tomatoes were almost finished, I sliced up a log of goat cheese, dipped each slice into milk, then fine bread crumbs. A tablespoon, or three, of EVOO were put into a hot iron skillet and began to brown. If more crispy brown was wanted, I would have dipped the cheese slices into an egg wash. 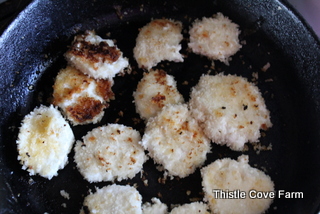 When the cheese was a melted, delicious mess, each round of goat cheese was married to a bread slice, then topped with the roasted tomatoes. A taste test revealed another crank of the pepper and salt grinders was needed, but… it was wonderful! 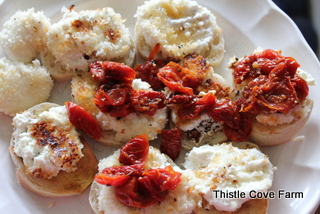 So wonderful, I’ve had it for supper, several times, in the last week. The tomatoes are also good when added to soups, stews, scrambled eggs. I’m still finding out ways to use the roasted tomatoes and have frozen one batch to use later.


The Food Network Magazine has been around ages but I just discovered it recently and have read it cover to cover. It’s great and has recipes from a wide variety of folks as well as recipes pertinent to the season. I subscribed and want to give a year’s subscription to someone. Preference goes to followers…meaning only those who follow my blog are eligible to win. It’s not that I’m trying to gain more followers, I’m saying thanks to those who are followers.


The October issue has lots of lovely pumpkin recipes, apple recipes and bread recipes. November’s issue has lots of Thanksgiving recipes and Ina Garten, The Barefoot Contessa on the cover. Her latest cook book is Make It Ahead, and I’m all about making it ahead. My favorite kitchen tools are my slow cooker, enameled covered cast iron and plain cast iron cookware. I’m not sure I could do without any of those; surely don’t want to imagine trying!


Leave a comment, telling me your favorite Autumnal recipe. It can be your recipe, someone else’s, one from the magazine…doesn’t matter; just tell me your favorite recipe for this time of year. A stateside winner will be chosen one week from today…next Friday at 5:00 and will be notified by e-mail. You’ll have 24 hours to acknowledge and send me your address. If 24 hours pass and that’s not done, another name will be chosen. Good Fortune be yours!