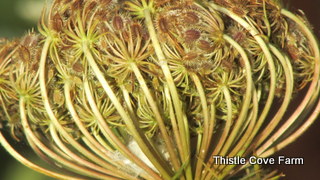 Daucus Carota is a biennial belonging to the carrot family, is also known as Queen Anne’s Lace and, along with Protea, my favorite flowers. Legend has it Queen Anne of England (1665-1714) pricked her finger and a blood drop fell on the white lace she was making. 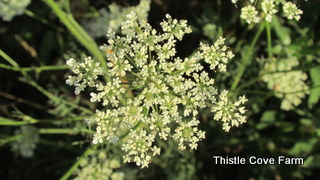 Queen Anne’s Lace, the flower, was eaten by the Romans as a vegetable and the early Colonists boiled the root with water as a drinkable treat. That might sound bitter except Queen Anne’s Lace sugar content is second only to the beet in root vegetables. Other folks such as Irish, Jews and Hindus have been known to use it to sweeten their food and the open flower heads may be tempura fried or, raw, tossed in a salad. 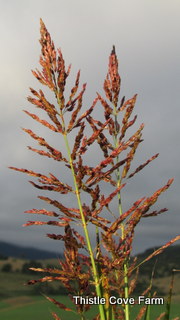 The area around the bird feeder has grown up into a mare’s nest but I like it that way. Once winter has arrived, the weeds will be pulled or cut, but the millet will be left to re-seed and provide cover for the birds. Most folks think of millet as only bird seed but it’s also a delicious grain that can be prepared roasted, creamy like mashed potatoes or like rice. It’s heart healthy and has goodly amounts of copper, manganese, phosphorus and magnesium. This site says magnesium is known to reduce the severity of asthma attacks, lower blood pressure, reduce frequency of migraine attacks and reduce risks of heart attack. Not bad for “bird seed”! 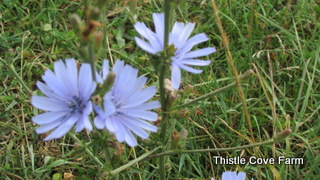 My mother-in-law called these little blue flowers “blue bonnets” or “blue bells” but they’re also known as chickory plants. The roots are roasted and added to coffee while the above ground portion may be eaten in salads or as a veg. Mrs. B. also said the reason Bluefield, WV was called Bluefield was due to the early Anglo settlers. When they arrived to the area, they could see hundreds of thousands of these flowers and exclaimed at the blue fields; thus the name.

Days begin early around here, sometimes before 5:00 a.m. but it’s, usually, lights out by 9 or 10 at night. From one day to the next, I make sure the horses are on their feet with food, water and shelter so if I do sleep in until 6 or 7, everyone should be all right. I gave up sat t.v. in January and thought I’d miss it dreadfully but I don’t, there’s simply too much that fills that time. 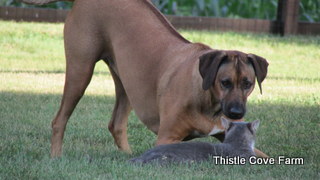 Sadie has no clue how big huge she is and can hardly ever understand why the smaller animals don’t want to play with her. The cats, when they see her coming, will simply lie on the ground and wait for Sadie to lose interest. I’ve often wondered at the courage and faith it takes for such a small animal not to panic when they see their natural enemy, weighing ten times more, rushing at them. 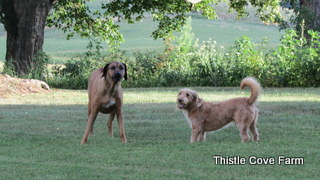 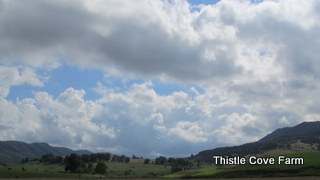 Today, it’s really cloudy and the keeps playing peek-a-boo. Some of the animals and I have already been to the pasture to chop thistles and one water tank to clean. I took photos of the hay bales John and Daniel bales and rejoiced there are 22.5 of them. 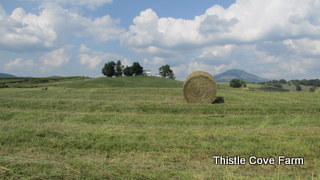 ~ hay pasture with house on hill ~ 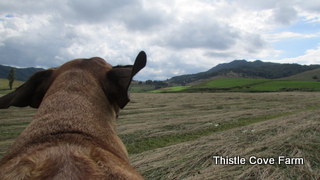 Sadie and I took a break and I sat on the ground and she sat on my lap…she prefers my lap when I’m available…and you can see how the wind was blowing because her ear is lifted. 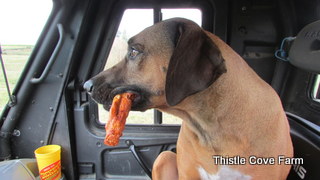 When I’d return from a trip to the grocery, Dave would ask, “Did you get the dogs their seegars?” The dogs take their chews and carry them around the farm as we do chores. When hanging out of their mouths, they resemble cigars…yes, small humor but clean humor…counts for a lot, doncha know?

I finished a boatload of paperwork this week…that’s the good news and the bad news is…there’s a boatload of paperwork left to finish. I also have to go across the mountains to buy cream to churn for the county fair on Thursday. Faith and her sister are helping me and then they’re going to wander the fair for a bit…it should be a good day…please God! Right now, I’m going to close out this post, go get the mail and then…attack paperwork…charge!