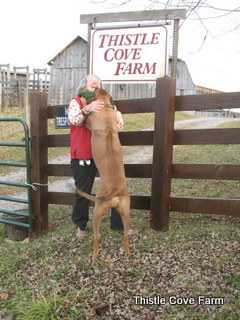 I’ve been churning butter since last Thursday; finally finished Sunday afternoon. In case you’re wondering, there’s a little more than eight pounds to a gallon of cream. One pound of cream yields around one-half pound of butter and ten gallons of Jersey cream made somewhere between around forty+ pounds of butter. Maybe more but, frankly, I am so tired my brain stopped working sometime Friday. Maybe Thursday night; it’s all a blur.


Suffice it to say, I will never, ever, as God is my witness (shades of Scarlet), be talked into buying ten gallons of Jersey cream again. At least not at one time. Nor will I never, ever churn more than two gallons at one time. Ever. Unless there’s serious money involved which means I’m probably safe.


I’ll blog about Churning 101 later but it needs to be told, at two separate times, my dasher broke and I churned with my right hand only. I never knew it could be done either but, it’s been said, necessity is the mother of invention, and I proved that right.


P. S. NOTE: I lied. Not intentionally but lied nonetheless. Tonight, I was putting the kitchen to rights, before taking my shower so I could then pass out which is what I call sleep after such a bone crushing day, and found the gallon enamel covered bowl containing whipping cream. O lawz. I thought I was done and finished but noooooo. It took an extra hour but I made another four pounds of butter…by hand and by hand, I mean working the whipped cream like making bread until it separated into buttermilk and butter. Another four pounds of butter. I swear, the first ten people who call me will gifted with one-half pound of home churned butter.


It’s been raining since Saturday morning and today, in the middle of the day, we had 3 hours of sunshine. I took advantage of sunshine to climb on the tractor and move hay from the middle to the edge of the field. I hate for hay to stand where it was baled; it makes dead places in the pasture and every dead place means nothing will grow…except weeds which aren’t wanted. Moving hay bales gave me time to think and what I thought about was what I’ve learned on the farm. Many, many lessons but these ten are worthy to be told now…imho…grin!

2.  Farm work is hard but it keeps me strong and moving forward.


3.  When I’m prepared for the storm, I can sleep through the night.


4.  Nature is the supreme white noise.


5.  God is stronger than my tears or fears.


7.  Schemes and dreams are very different.


10. It’s easier to step in manure than get it off my boots.


Sure hope you’ve enjoyed these ten things and, perhaps, some of them might apply to you and your situation. If they do, let me know which and how, ‘k?