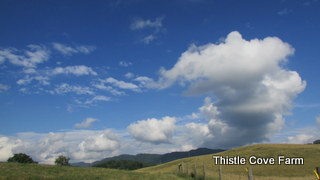 Grace, over at Buttons Thoughts, has been putting up hay; she’s at 410 bales and counting. (I am green with envy!) This summer is the wettest in my memory which only goes back almost twenty years in this place so others’ mileage may differ. There’s good news and bad news…the bad news is, for the first time since living here, hay hasn’t been made; it’s simply been too wet. The good news is I’ve planned carefully and have both round bales plus square alfalfa bales and my horses will still eat well this winter. Thank God! 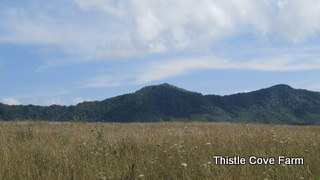 On this farm, there are two hay meadows that haven’t been cut and, truthfully, I’ve wanted to fret but every time I’d start to fret, God would whisper, “Trust me, Sandra, trust me…” and remind me of Exodus 14:14 “I will fight for you Sandra, you only need to be still.” What He’s saying to me is, “Cast your cares upon me because I care for you” and, most importantly, “hold your tongue and I will work everything out for your good. You may not see it, it’s the long view but trust me, Sandra, trust me.” When I’m able to quiet myself and trust in Him, life has a way of seeming to be smoother and I’m better able to handle the stresses, and those who stress, much better. It’s a difficult, daily lesson. 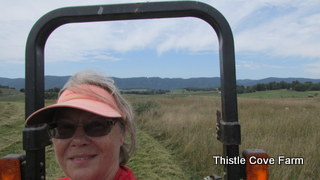 So, after considerable thought (and checking with Daddy) I decided to mow both pastures. the growth is dead, gone to seed and, instead of buying seed to re-seed the fields, mowing it will allow the seeds to go plant and fertilize themselves. Dad said, when possible, it’s good to do this every so often; the Bible says to let a field lay fallow every seven years so, once again, God is taking care of me and His creation. 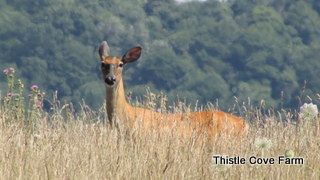 It takes me a very long time to mow a field and that’s due to two things: the first is I drive slowly because I’m not terribly comfortable on a tractor on hills and the other is, I’m always looking ahead for wildlife. This doe was nestled in the tall grass, perhaps with her fawn, and was frightened when I passed by. She stayed close, snorting and stamping her feet, which made me wonder if she had a fawn; I took a lot of time, moving slowly, watching ahead carefully but never saw the baby. After a couple of passes, I decided to mow the upper side, back and forth, back and forth, and not do a complete circle. It took longer, much longer, but no one was injured and that made it worth the extra time. 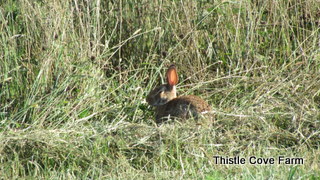 Several rabbits made their escape. 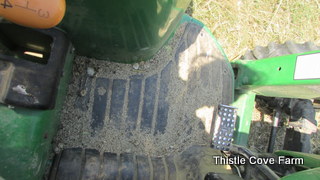 Difficult to see but all the “dust” are seed heads…lovely, lovely free seed heads. I could have gone to the farm supply store and paid hundreds, if not thousands, for seed but God supplied these. 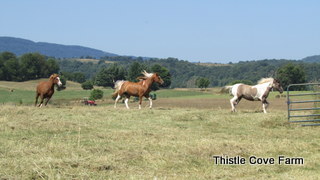 After mowing the field, six of the horses were turned loose and showed their approval by stretching their legs. Above, Lightly, DaniGirl and Izza took a turn ’round the field, while below, Izza strutted. 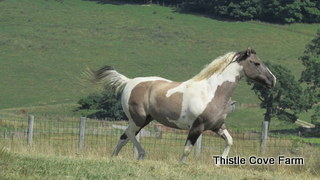 Part of the joy of living here is the wildlife. That’s also another reason it takes me so to get stuff done…if there’s something to watch, I’m going to take time and watch. I consider it a gift and I’m not one to take gifts for granted. 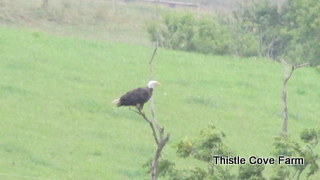 The eagle was in the top of a tree, about one-half mile away, so the picture is blurry. Still, it’s easy to see this is an American bald-head eagle and I watched as this one and a juvenile had a disagreement over carrion. 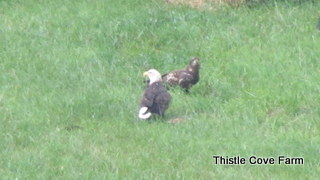 While I was writing this post, I noticed John and Daniel, mowing my lower pasture. I hastened to tell them, “don’t bother” but John said, “it’s good hay” when I said, “I’m going to mow it, let it re-seed and fertilize the field.” This is one of those “life lessons” times and, standing there, talking to John, I almost started crying, not due to anger, but simply due to anxiety, frustration, stress and exhaustion. I don’t want to put up, nor will sell, crappy hay but John assured me, “it’ll still re-seed and there’s good stuff underneath” so I said, “all right, go ahead.” So, I’m hoping and praying for clear weather enough to get the hay put up.


Farm sale update: I’m not sure why I continue to be amazed at how fast gossip…iow, my business, travels and at how eager people acquaintances people are to give me advice. Lately it’s been, “I heard Mr. X was interested in buying your farm. Don’t sell it to him, we don’t want his kind in Tazewell.” Now, I’m not sure what “his kind” means but I think politics plays a role. You see Tazewell is heavily Democrat (because that’s how my Daddy voted, that’s how my Granddaddy voted, that’s how my Great-granddaddy voted and that’s how I vote) and Mr. X is Republican. (Yes, boys and girls the playground is full.)


Actually, I’m a registered Republican because when we first moved here and went to the courthouse to register to vote, we were asked, “How do you register?” I replied, “Independent” and was told, “That’s not an option, around here it’s Democrat or Republican.” So I asked which was the largest party and was told, “Democrat” and I said, “I’ll register Republican then.” (The words of Queen Victoria come to mind…”We are not amused.”)


Anyway, the price on the farm has been lowered and if it doesn’t sell by end of September, will be taken off the market. I’ve got oil and propane, water, food and shelter for all of us…life is good because God is good. Yes, there are frustrations, stresses, anxiousness, exhaustion but…the good news is, it’s because it’s my (and God’s) farm…it’s not a cubical with someone lording it over me because they can. When I remember some of the crappy jobs I’ve held (and some of the crappy men for whom I’ve worked) a stressful day on the farm beats a great day in the office every time!