“Do you think I’ve gone round the bend?”
I’m afraid so. You’re mad, bonkers, completely off your head.
But I’ll tell you a secret.
All the best people are.”
~ Alice in Wonderland ~ 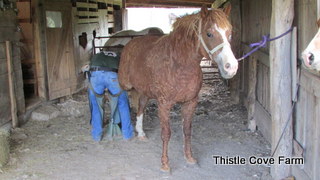 Thanks be to God I found a farrier! He’s Jared Brown and a graduate of the Heartland Horseshoeing School. If you’re in southwest VA and need a farrier to trim or shoe, send me a note and I’ll give you Jared’s phone number; his e-address is jb_farrier at hotmail dot com. He’s excellent at his work and, already, my beasties are showing signs of improvement. They’d have to because they’ve had me trimming their feet and I’m not a farrier. My work was shoddy but it was better than being lame…not much but still better than being lame. The mare above is Meri Go Lightly, an American Curly horse, who showed her behind while Jared was working on her. I told Jared, “I’m going to the house for water, back in a minute”. While I was gone, Jared said Lightly jerked, twisted, reared and, finally, threw herself down on the ground in a petulant fit. My only comment was, “Did you take 3 seconds to kill her?”


That’s the rule…when a horse is being stupid, you’ve got 3 seconds to “kill” them. Usually, 3 seconds is all it takes, along with a lot of noise and jerking of the lead rope. I take excellent care of my animals but I refuse to put up with any foolishness…not the least bit. They’re huge, I could get hurt in a NY second and it’s not above me to get a horse whip and use it. Jared has my permission as well but he’s a lot stronger and it doesn’t take as much for him to control a horse so what I do is get out of the way…quickly! 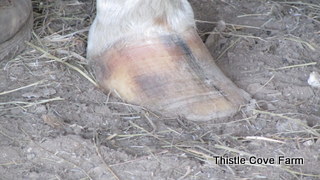 Jared has us on a schedule and comes every 6 to 8 weeks. In the past, Lightly has foundered and her feet grow wonky but Jared is confident he can restore her to wholeness, given time. I’m grateful he’s put us on his schedule; it helps him and it helps us…a win win for all! 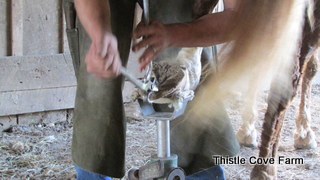 Before he comes, I have the horses with halters on and have cleaned their feet. He doesn’t require it nor expect it but it’s a small kindness I can do and it pleases me to work with the horses. 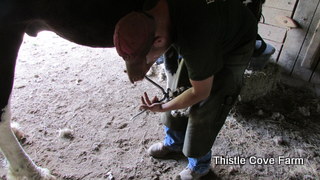 First, he takes nippers and trims off the excess around the hoof. In a horse that’s foundered, that’s a delicate job and requires skill, expertise, knowledge and education to do correctly. 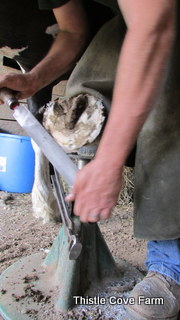 The hoofs in the two photos above belong to HayJ, a Curly x Percheron. At one time, HayJ was the only black and white Curly x Percheron stallion in the world…then I had him cut or castrated. He’s about 18 hands, about 72 inches, and around 2,000 pounds and, with hormones, he could get a little frisky. Best to nip that in the bud, so to speak; as it is, if he doesn’t want the halter on, he will raise his head and look down at me. Thank God he’s a gentle giant!
After trimming, Jared uses a rasp to file the hoof smooth. I always had to use gloves because the horse would, invariably, jerk their hoof and the rasp, or file, would scrape across my hand, leaving a bloody mess. When that happened, I’d finish up, come to the house and wash the wound with tea tree soap then pour alcohol over the wound and finish with peroxide. It might sound extreme but better a little sting now than septis later. 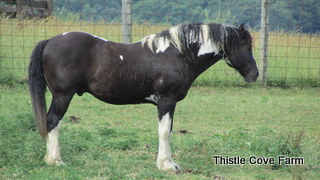 One of these days, HayJ will be trained to pull a cart, wagon or Meadowbrook; I want to drive! 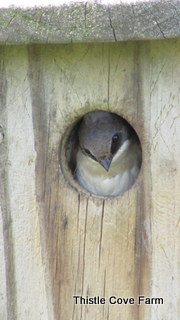 The bluebird box can be seen from the barn and Mrs. Bluebird is doing her duty. 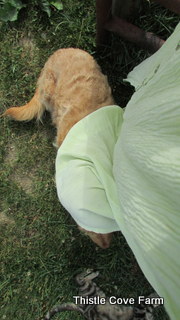 While getting the horses ready for Jared, in addition to picking their feet, I brushed them, cut some manes and then combed some manes. Everyone enjoyed the attention but, after working 6 horses Saturday, yesterday I took it easy. Sam like to hide under my skirt and peer out at the world; he’s a funny little feller. Sam and 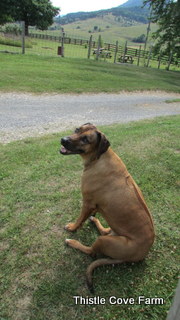 Sadie took it easy with me. 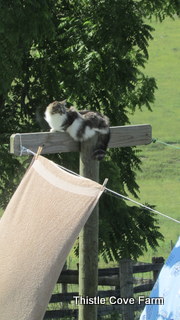 Today, Gypsy helped with laundry. By noon, there were six loads washed and hung on the line; last week was rainy so no laundry was washed. What was meant to get done today…taxes and bills…will have to be moved to Wednesday’s to-do list because tomorrow is going to be a repeat of today. 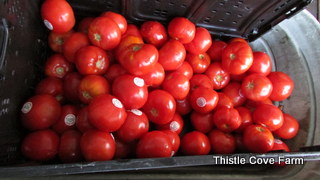 Evening plans were to shower and go to bed at a respectable hour but that’s not happening. For a good reason though…someone blessed me with Tennessee tomatoes that have to be canned. These tomatoes are fresh and some still have their stems attached! When the phone call came, I thought it was going to be enough tomatoes for a dozen quarts or so, but it’s two huge boxes, about a bushel, and I’ve already got the first seven quarts on the stove. They should come off in about an hour, time enough for that shower and a cup of chamomile tea which has a variety of good things but especially to aid sleep.


I was down to my last quart jar of tomatoes so this is a huge blessing. I’m going to can seven quarts to give to the woman who remembered me with this gift. She’s not able to can this year, I am able and want to say “thank you” in a tangible way. When the snowballs fly, is there anything that says “summer” more than a quart of home canned tomatoes. I think not.