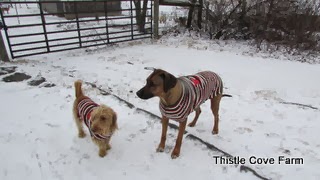 ~ Sam P. Spade, Secret Agent and Sadie Lovebug ~
“The Lord God said, “It is not good for the man to be alone.
I will make a suitable partner for him.”
So the Lord God formed out of the ground various wild animals and various birds of the air, and he brought them to the man to see what he would call them, and whatever the man called each of them would be its name. the man gave names to all the cattle, all the birds of the air, and all wild animals, but none proved to be the suitable partner for the man. So the Lord God cast a deep sleep on the man, and while he was asleep, he took out one of his ribs and closed up its place with flesh. The Lord God then built up into a woman the rib that he had taken from the man. When he brought her to the man, the man said, “This one, at last, is bone of my bones and flesh of my flesh. This one shall be called ‘woman’, for out of her man this one has been taken.” That is why a man leaves his father and mother and clings to his wife, and the two of them become one body.”
~ Genesis 2:18-24 ~

“It is a foolish woman who expects her husband to be to her that which only Jesus Christ Himself can be: always ready to forgive, totally understanding, unending patient, invariable tender and loving, unfailing in every area, anticipating ever need, and making more than adequate provision. Such expectations put a man under an impossible strain.”
~ Ruth Bell Graham ~

“Nearly all marriages, even happy ones, are mistakes in the sense that almost certainly (in a more perfect world or even with a little more care in this very imperfect one) both partners might be found more suitable mates. But the real soul-mate is the one you are actually married to.”   ~ J. R. R. Tolkien ~

“You don’t marry someone you can live with,
you marry the person you can’t live without.”
~ unknown ~
“Great marriages are contagious.
If you want a great marriage,
surround yourself with couples who have one.”
~ unknown ~

“My most brilliant achievement was my ability to be able to persuade my wife to marry me.
~ Winston Churchill ~
“A happy marriage is the union of two good forgivers.” ~ Ruth Bell Graham ~

“You are the melody God has chosen
to play on the foreground of your husband’s world.”
~ unveiled wife ~

“It is not a lack of love, but a lack of friendship that makes for unhappy marriages.”
~ Nietzsche ~
“You come to love not by finding the perfect person, but by seeing an imperfect person, perfectly.”  ~ Sam Keen ~
“The more I think about it, the more I realize, there is nothing more artistic than to love others.”  ~ Vincent van Gogh ~
“Goals of National Marriage Week USA: 1. To elevate marriage as a national issue in the media and with policy leaders. 2. To promote the benefits of marriage, that stronger marriages bring economic stability to individuals and to the nation, and provides the best environment for thriving children. 3. To create a national calendar for existing, trusted marriage classes, conferences and events where people can find the help they need, or reach out to help others.” ~ National Marriage Week USA ~

“Haven’t you read,” He replied, “that at the beginning the Creator
‘made them male and female’ and he said,
“For this reason a man will leave his father and mother and be united to his wife,
and the two will become one flesh’? So they are no longer two, but one.
Therefore what God has joined together, let man not separate.”
~ Matthew 19:4-6 ~

If you have a prayer request, please let me know. Names are kept for one week; around the world, people are praying.