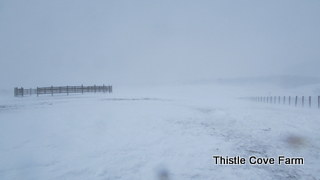 Patrice is hosting Chats on the Farmhouse Porch, number 127; her questions, my answers.

1. Have you been watching the Olympics? No, haven’t a clue what’s going on in the world but I can tell you what’s happening here and in more detail than you, probably, want.

2. Does the grey winter affect your moods? Some but I spend a lot of time outside, no matter the weather, so I’m not as affected as someone who works inside. Also, when I knit, sew or spin I’m either in the sun room with natural light or using OTT lamps. If you’re not familiar with OTT lamps, you should be, they make all the difference in your ability to see, no matter the time of year.

3. When was the last time you held a baby? Recently although I have no clue who the baby was nor her parents. If I see a baby in the grocery store and start making goo-goo eyes and the parents don’t freak out, I ask if I might pray for their baby. No one has ever turned me down so I take the baby and pray God’s blessings on the baby and the parents. Young folks seem to, especially, appreciate the prayer and, yes, other folks stand around and gawk but so what? If they’re Christians, they should be joining in prayer and if they aren’t Christians, maybe it’ll make them think…eternity is a lot closer than any of us know or expect.

4. Do you do a thorough spring cleaning each year? I’m going to this year because the house/farm is going on the market. I’m hoping to hire some help and if you’re a praying person, pray I’ll find someone to help me do major cleaning. 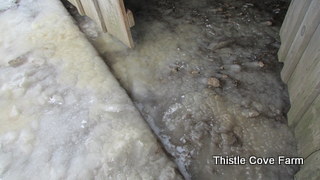 5. Please tell Wendell a bedtime story. …Once upon a time, there was a farm where there were only three seasons…hot, cold and mud. All the animals lived to be tremendously old and were given only the best hay and mountain water to drink with treats of grain and molasses. There was a unicorn flying over the farm and no animal was ever turned away or denied food, water or shelter. The sheep were rare breed Shetlands from the Shetland Isles, some Romney’s from the Romney Marshes of England, one Columbia Suffolk cross who was an Easter lamb and then unwanted and two Merino’s who were bottle fed as babies and were absolute terrors! The four alpacas were beautiful, but aloof, creatures who walked proudly among the sheep, heads held high and they always chose the best places to sleep at night. The horses were rare breed, American Curly horses who were gaited, colored and, for the most part related to each other in planned breedings. Tumbleweed, the black mare with white stockings, was a rescue but the rest were all related by either dam or sire. There were dogs, house cats and barn cats and, unfortunately, a skunk and o’possum who lived under the house and a squirrel who lived in the tree. It was a Peaceful Kingdom where there was always time for nose kisses, head rubs, body hugs and, most importantly, love. (Except in the case of the skunk, ‘possum and squirrel, they were encouraged, to no avail, to move.) 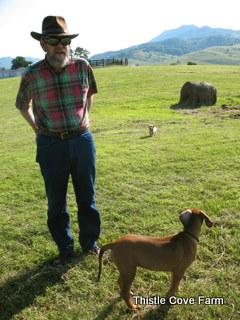 ~ the husband, Sam and Sadie ~

As with all of life, the only constant is change and vast changes came to the farm. The husband died, quite suddenly and unexpectedly, leaving his wife to manage as best she could. For the first year plus, she managed (although she was at a loss as to exactly how she managed!) and farm life ebbed and flowed with the seasons. She tried her hand at raising steers, or neutered bulls, but decided having ten “teenage boys” who weighed one thousand pounds each was an accident waiting to happen. The steers left, the fences were repaired and, again, farm life ebbed and flowed. 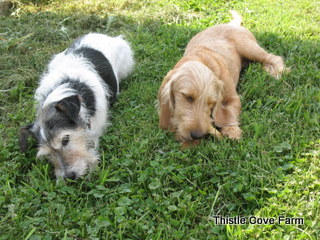 The second summer after the husband died, their beloved Jack Russell, Abigail, who had very ancient bones, just couldn’t manage. She was tired and it was time to say good-bye. Just a few weeks later, their beloved Australian Shepherd mix, Grace, who was even older than Abigail, died. For months, things were settled and then, just before Christmas, the woman’s other beloved Jack Russell, Sophie, died so now the woman had only Sadie and Sam, three five year old pups. 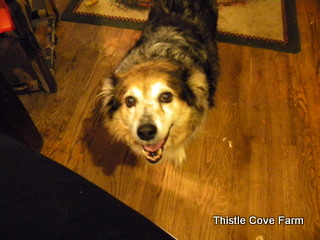 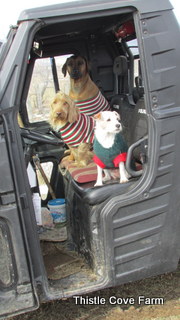 That winter was hard; it was cold, extremely cold with temperatures twenty degrees below zero and wind chills much lower. Snows were deep, followed by icy rain and more snow, making everything treacherous and dangerous. The woman’s sheep were old and had a lot of problems that come with old age. 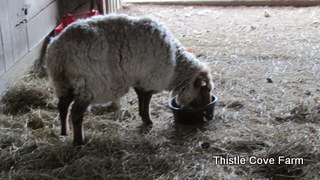 Harry Shetland was blind and lived in the barn with access to a small lot were he could drink warm water from an electric water bucket and lay in the sun to warm his old bones. Twice a day, the woman would carry Harry and Sophie cracked corn and grain with fresh hay. Sophie Shetland was just as old and her arthritic bones, many days, prevented her from getting to her feet. Carly Shetland, at twenty years the oldest of them all, was allowed to live in the yard where she toddled, eating her molasses and grain mixed with pain meds, drinking warm water and eating alfalfa hay the woman brought to her twice a day.

February was a hard month, full of deep snows, extreme cold, high wind and low temperatures. Harry and Sophie were suffering and the decision was made to release them. The woman and her vet explained to Sophie and Harry, this was their last gift. They had both had wonderful lives, much better lives than a lot of parents give their children (how terribly sad!) and they were to look for Dave when next they opened their eyes. On that same Friday evening, the vet looked at some barn cats and told the woman, “Start bringing them to the office, we’ll begin spaying and neutering next week.”

That weekend was terrible; the temperatures were horrid, the wind was horrid, the snow and ice made walking difficult and, sometimes, almost impossible. On Saturday, the woman carried (!) Carly into the house and put her in the mud room where she thought Carly would be more comfortable. Carly didn’t like being inside so the woman carried (!) her back outside but Carly needed help all weekend, getting to her feet. Even so, her little tail would wag with excitement when the woman would run to her, calling, “Carly, hold on, Girl, I’m coming, I’ll help you.” 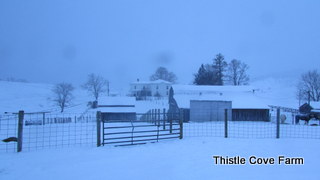 On Monday, it was almost warm, at least, not as tremendously cold as it had been and, at dawn, wonder of wonders, Carly was standing on her feet, calling for breakfast. The woman ran to get Carly’s breakfast and pain meds and put them in front of her and Carly’s tail began wagging as she started to eat.

When the woman went to the barn Tabby, one of her cats, was crying so the woman picked her up only to see where something had chewed on Tabby with grim results. The woman ran hurried to the house, got a towel and carrier and took them back to the barn. She gently placed Tabby in the carrier and then into the truck; as soon as the vet clinic opened, she took Tabby and left him but later the vet called and said it was too late, Tabby couldn’t be saved. The woman buys a lot of cat food in the winter in order to keep the barn cats close to the barn. When the snow is deep, there are a lot of predators (coyotes, foxes) looking for food and during the night, coyotes can be heard all over the valley.  There’s no way of knowing what tried to kill Tabby but what is known Tabby had a wonderful life on the farm.

Late Monday afternoon, the rain started and Carly was having trouble staying on her feet. Her fleece would get waterlogged and her poor little arthritic legs couldn’t hold her weight so she’d fall over. The woman kept running into the yard, righting Carly but then dark came and it was harder on the woman. She leaned Carly against the porch and left her covered in prayer. At dawn Tuesday morning, the woman ran to see Carly and had to help her to her feet but in the space of thirty minutes, the woman had to right Carly half dozen times and the hard decision was made. 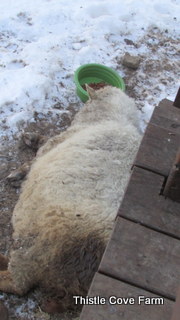 It’s a good day to die and tomorrow would be better; even so, the woman chose to do the right thing by her beloved little ewe and made the hard decision. The woman drove the Ranger from the barn to the yard and lifted Carly into the bed which was no mean feat because Carly weighed 65 pounds. The woman then drove the Ranger to the barn lot and struggled to put Carly into the bed of the truck which was horribly difficult. The thick ice underfoot made a hard job dangerous and only a lot of crying and praying got it accomplished. The woman put the dogs in the house and drove to the vet clinic, second time this week and it’s only Tuesday. 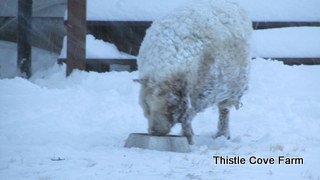 ~ Carly, covered in snow and ice ~

The woman held Carly, both to say good-bye and to prevent her thrashing around. Part of the woman’s prayer was, “Good-bye old girl, you’ve been such a joy and delight to me for so many years. Run to Dave, as soon as you open your eyes, run to Dave, he’s waiting on all of us.” 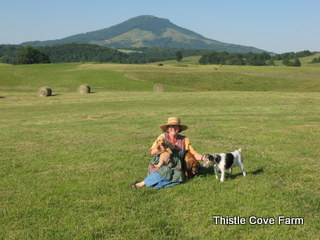 ~ the woman, Abigail, Sadie and Sam ~

The woman returned home, took Sam and Sadie for a walk and then they all went inside the house. The woman took two aspirin and laid down in the sun room where the sun was warming both room and bones alike. She thought how her life had changed, so dramatically, so suddenly over the past twenty-seven months and wondered what the future would bring. She dozed, drifting in and out of sleep, letting the sun warm her bones and the aspirin diminish her pain. When she awoke, she took the dogs to the barn, gave the kitten her meds and food, locked the front gate and then walked back to the house where she fed the dogs then filled the tub full of hot water and Epsom salts. When the tub was half full, she lowered herself into it and sunk again into a half stupor, waiting for the hot water and salts to work their magic.

Today was a good day to die but tomorrow would be better…much better.

Blessings ~ the husband ~ the animals ~ the life ~