My contribution to Vicki’s Grow Your Blog party is here with two giveaways. 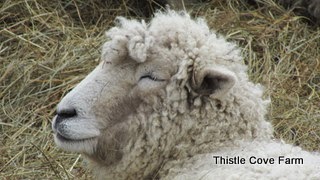 Patrice at Everyday Ruralty is chatting again, number 126, and so is Wendell although I think he’s all about the carrots. I like Patrice’s Chats and she’s a neighbor in northern VA. It’s been said crazy people talk to themselves which I think is hogwash! I talk to myself but, mostly, I talk to God and, when outside in the pastures or barns, I tend to glance up and talk to Him as if He’s standing there, only taller. Do people think I’m crazy? Does it matter? Should I care? (see number 1) Frankly, God is a much better listener than most humans I know and the results are, generally, a lot better as well.


Her questions, my answers and then a farm catch-up.


1. Do you worry about what other people think? Dave used to tell me, “Sandra, I wish you cared, just a little bit, about what people think of you.” And I would reply, “Dave, there are people whom I respect that I care, enormously, what they think of me. The others…not so much.” I spent wasted too much time as a younger woman, being fearful of what people thought of me. As long as I can lay my head on my pillow at night and know I’m straight with God, what difference do it make what others say? One of these days, they’re going to have to stand before the Almighty and account for their wicked words, as are we all.


2. Do you own a sewing machine? Many, p’raps a dozen ranging from a Singer Treadle to a German circa 1860’s hand crank in the casket to Featherweights to Kenmore’s…remember Johnny Depp as the Mad Hatter in Alice in Wonderland? He was using a hand crank but not sure what model. When Dave and I went to London in 2010, I found the German sewing machine at a charity shop; Dave just looked at me and said, “Yes, we’ll ship it home”.  What a great husband!


3. Tell us about someone interesting in your life. My life is too small now to know anyone interesting. When I lived in NYC I met Paul McCartney and some of the SNL crew…that was way back in the day. Gee, come to think of it, I’ve not met anyone interesting in a very long while! In 1997, I was an extra in Country Justice, re-released as Family Justice, starring George C. Scott and filmed here in Tazewell County. Mr. Scott was an outstanding gentleman and lived in Dave’s cousins’ house while he was here filming.


4. Did you watch the Super Bowl? Nope, no television service.


5. What’s the best dinner you had last week? Last week is a foreign country and the borders are now closed. I had pork tenderloin and roasted vegs for supper tonight and am doing good to remember that. Oh, and had a Killians Stout to wash it all down and, while it’s not as good as a Guinness, it’s still acceptable. 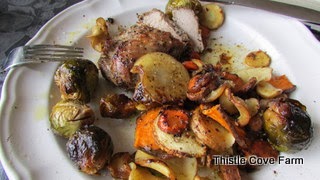 We’ve had several days of above freezing temps and it’s both a blessing and a gift! I haven’t had to break ice since Friday and my aching back (and pulled back muscle) is grateful…as are my arms and hands. We’ve had some rain, much need and appreciated, and the ground is soft and muddy. This is the time of year the pastures look like a demo derby has taken place. 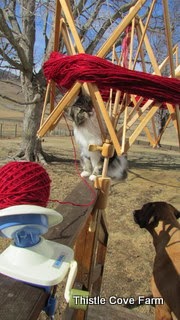 Using an umbrella swift and a yarn ball winder, I wound some red wool yarn to knit Mary a hat. Look here to see how it’s done in real time and, if you look closely at my photo, you can see Gypsy who was enormously interested in the entire process; Sadie…not so much. 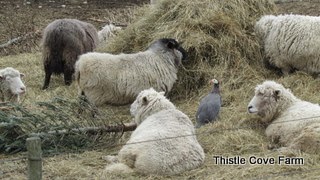 It’s a peaceful kingdom around here…see the guinea amongst the sheep? The other one has wandered around the back side of the hay bale so s/he can nestle in and get warm. Dave and I always strived to make sure everyone got along; disagreements allowed but not to the point where someone is injured. Most of my week has been boring…thank you, God! Last week about killed me.


I cleaned out the refrigerator and was amazed at how long some of those jars have been hiding in the back. Does that happen to you? Do you have jars of “stuff” that would have qualified as a science project a decade ago? Really, you don’t? Hmmm, I find it strange I’m the only one…


Now I’m amazed at how much empty space is in my refrigerator!


The phone just rang and…I lied. It was another person asking for Sandra, pretending like we’re best buds, and wanting to sell me a warranty for my car. So, I lied. I told her I’d sold the car…stunned silence…”you sold it”? Silence from me, no need to lie twice, doncha know? (grin) Then, “Thank you very much” and I’m now hoping my contact information is struck from their list. I’ve told them, time and time and time and time again…not interested. This time I just lied. How would you have handled it?


The best thing to happen this week was Kinsley Nicole was born 2/2/14 and is 8 pounds 14 ounces and 20.5 inches long. Proud Daddy Dustin and Mama April are both peacocks and the rest of our family is beaming as well. Dustin is the youngest son of my beloved Sistah, Stephanie, and this baby is the first born in our immediate family since Dustin was born a few decades ago. Kinsley, of English origin, means “King’s Meadow” and Nicole, of French origin, means “people of Victory”. In our family, there are preacher’s of the Gospel on both sides, so this baby has a rich heritage.