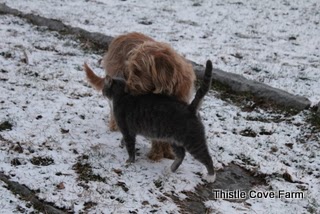 Just so you know, my day has plenty of sweetness that outweighs, mostly, all the hard, messy, cold, dangerous work. Dave was always a night owl and I’m a morning person; it worked out well because he would have his quiet time in the evenings, after I’d gone to bed and vice verse in the mornings. By the time he was ready for coffee, I’d been up a couple of hours, made coffee, had devotions and started breakfast. Being a creature of habit (aren’t we all?), I still get up early and it’s not unusual for me to be awake at 4:30 but, usually, it’s more like 5:00 or 5:30. Every now and again I’ll sleep in until 7 or 8 o’clock and then feel like I’ve wasted half my day. Anyway, lately it seems several of my posts have been on the whiny side so here’s some sweetness. (If it bores you beyond tears…you’ve been warned, smile). 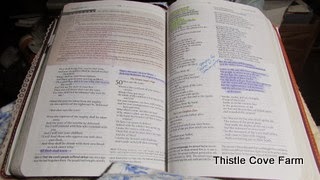 One reason I get up so early is so I can have devotions. Each morning, unless there’s an emergency, I sit in the sun room and read the Bible and other devotions then listen to Pastor’s Youssef and Begg on XM Radio. If I can’t get beyond first gear, sometimes I’ll stay and listen to Chuck Swindoll as well. Dave used to get such a kick out of Pastor Swindoll’s last name; he’d say, “What a perfect name for a preacher? Is he a swindler?” Not to my knowledge but he is a good teacher of Scripture.


The stacked books on the left are knitting, crochet and a novel or two. The books on the right are devotionals and Bible studies. The knitted wash cloths have scented soaps inside and are given to folks who have made my life a bit easier this past year. The women at the feed stores, auto repair and other places while the men receive short bread. 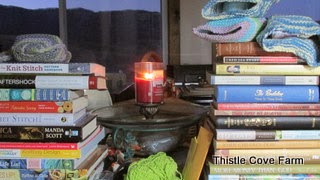 I light a Wood Wick Candle because I enjoy the glow, fragrance and the sound. If you’re not familiar with Wood Wick candles, instead of a cotton waxed wick they have a wooden stick wick. 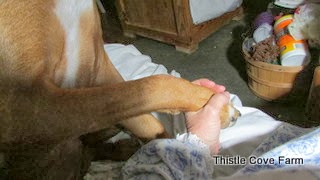 All of us have our routine; Sadie sits to my left and starts out her morning (after treats, of course) by holding hands. She’ll raise her paw and use it to nudge me until I take her paw in my hand and we sit, quietly, for a few minutes. 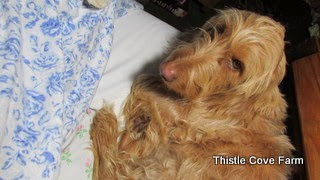 Sam reclines on my right and when he feels Sadie is receiving too much attention, he’ll slide over and tuck his head under my nightgown. By the way, if you like flannel nightgowns, Lanz makes the Most Wonderful flannel nightgowns! I’ve worn them for decades and they wear like iron and, when worn out, make excellent cleaning cloths. Recently, I found some at TJMaxx and they’re more than 75% less than the price I found on the inter-net.

Meanwhile, Sadie has stretched out so she can lay her head in my lap, 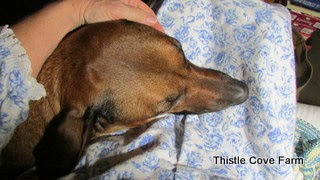 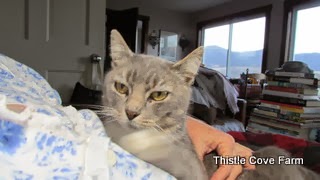 while Tom sits on my stomach, sometimes resting his lower end on the top of Sadie’s head. It’s all right, we’re all friends here.

In the past day we’ve gone from snow on the ground to bare ground. It’s gotten above freezing, several days in a row, and everything has started to melt. (Which reminds me…I never did hang the laundry out today.)

I opened up the alfalfa field so the horses and alpacas can graze it; there’s a lot of good pasture to be eaten and the manure they drop will aid in the new growth come spring. 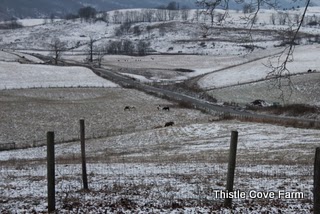 I wait until 8:00 or thereabout to give Carly her morning meds with her breakfast. Some days I have to find her and other days she’s still asleep. I’m disgustingly simple when it comes to the animals and try to make their lives as kind as possible. 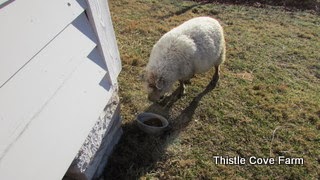 When the dogs and I go to the barn, we check on Harry Shetland. He’s an old wether, as old or older than Carly, and I’d love to bring him to the yard but he’s better off at the barn, with no other sheep. He has the barn cats and guinea’s for company, he’s safe and I take him water and food twice a day. 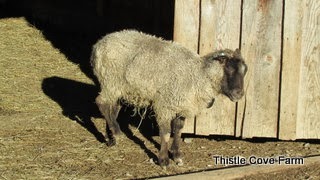 He’s blind and far safer where he can’t be run over by the other animals. I was going to put him down but he’s still enjoying his food and will move toward me when I shake his pan and call him. During nice weather, he can get in the sunshine and, at night or in bad weather, he can turn and go into the barn and lay down. He has free choice hay so he always had good food and water. I’ve noticed he prefers me to bring him fresh water in the morning and afternoon and he’ll take a good long drink while I hold the bucket. Sometimes, he’ll drink from the bucket when it’s placed on the ground in front of him.  These animals are a study in patience for me; I can’t become frustrated or get rushed or they’ll panic and we’ll be right back where we started. It’s much easier for me to go slow, speak quietly, gentle and low and move slowly. Heck, it’s probably good for me as well! 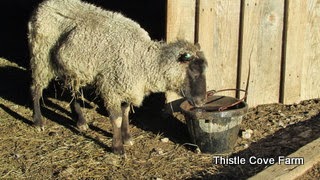 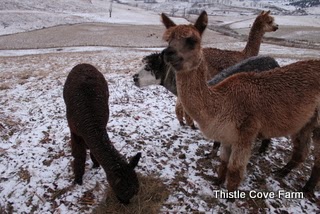 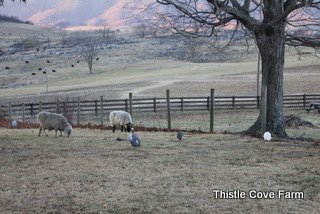 The sheep are grazing the yard while the three guinea’s wander amongst them. Generally, the guinea’s roost in the sugar maple tree and have proven to be excellent “watch dogs”. I’ve decided I’ll always have guinea’s as they are comedians as well as “watch dogs”. They know when Sadie chases them, it’s all for show; she just likes to hear them raise a ruckus.

A lot of my days, thank God, are simple and full of the work that it takes to keep this place going. I have two horses I throw hay to every morning and afternoon; I should get on the tractor and give them a round bale but, truth be told, my bones have been a bit creaky lately. Hard as it is to believe, it’s just easier to climb in the loft and throw down a few square bales and tear them apart.

Daddy John, wife Ashley and their families have opened a restaurant (the restaurant business being, as Daddy John says, “the nearest thing to milking twice a day as I’ve ever seen!”) and Ashley requested some knitted goods to display and sell. I had some things ready, then decided to knit some other things, and my poor hands are repaying me by not working properly. As in, I can do almost anything I want to do if it doesn’t include picking up or holding things, knitting, or typing for any length of time. Ben and I go to bed together, nightly, with aspirin and a glass of alcoholic beverage. Don’t get me wrong, I’m not a big drinker but Dave used to tell me, “Take some aspirin and drink a beer or glass of wine and you’ll sleep a lot better.” This was the same man who would tell me, “Don’t you think you should wait until your head hits the pillow before you fall asleep?”
Ah…such Precious Memories.