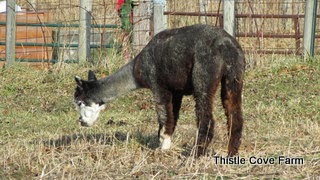 Woman plans, God laughs and I’m more than a week late with the second part update. Good news, PacaRose is fine and dandy and I’ve come to the conclusion he’s F.A.T. and has a problem getting to his feet when he lays down with his head uphill. 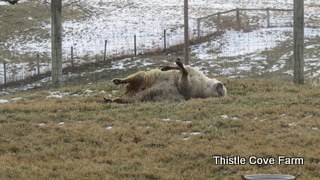 But, I should start with events leading up to the first paragraph. Every so often, Carly Shetland will become ‘cast’, meaning she gets turned over and can’t right herself. I go to her, speaking softly and in a low voice so she knows I’m coming. Once she hears my voice, she begins bleating, as if telling me she’s in a pickle and needs help.


Fortunately, I don’t have to lift her, but can roll her so her feet are on the ‘down’ side, then she can stand. Carly gets arthritis pain meds in the morning and in the evening which helps her greatly with her mobility, but, even so, there are times when she needs help.

After getting Carly to her feet, I went to the barn where PacaRose was down and I had to get him up. That meant, I lifted his head and l.o.n.g. neck upright, scooched my feet underneath him and then heaved lifted pushed him to  his feet. Once he got started, he was fine and dandy and begins eating and drinking normally. Fortunately, that was the last day he was down; it’s been all good, for him at least, ever since. 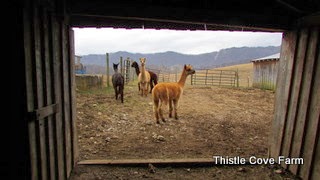 Next, the farrier came to trim horse feet which was a two and a half hour job. Not all the horses needed trimming but they all needed de-worming and all were de-wormed except HayJ. By the time we dealt with seven horses, I was exhausted and just wanted the farrier to leave so I could crash and get warm but that was not to be. 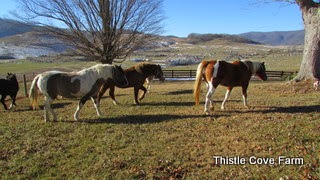 The dratted horses escaped into the yard which, as you all well know, wasn’t their fault the gate was left open. Totally my fault but that did not ease the forty minutes of pain of getting them back into the barn lot. 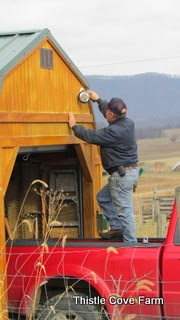 On Monday, Donald, Mary’s husband, came to fix the barn lights; he figured out the black wire wasn’t connected properly and the lights were blown. At any rate, he fixed the wires, replaced the bulbs and it’s lovely having dusk to dawn lights in the driveway! 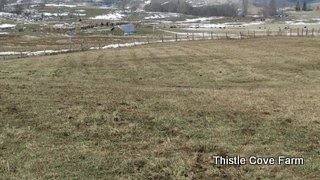 Andy also came on Monday to drag the pastures; he used the harrows to distribute the manure so, over winter, it’ll decompose and return to the soil. You can see the lines in the pasture showing where he used the tractor and harrows. He also helped de-worm Hay-J so all the horses are finished being de-wormed; now only the sheep remain.


So far, so good but the story is about to take a downward turn…you are warned.


The dogs, as usual, were with me, every step throughout the day. In the afternoon, Sophie began trembling, shaking and acting like she was freezing so I put her in the Ranger, out of the wind and cold. We came inside at 4:00 so I could feed the dogs their supper and, if anything, she got a little worse. When I put her food in front of her, Gypsy Cat stuck her head in Sophie’s dish which was highly unusual. In a hurry, I ran to use the bathroom and Sophie followed me; when she walked into the wall, that’s when I knew, for certain, she was blind. I called the vet, told them I was bringing in Sophie, grabbed her up and ran for the car. 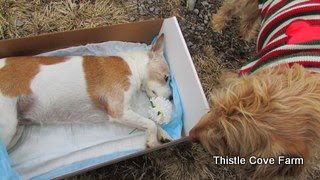 Long story short, she might have had a stroke which cause her blindness but we don’t really know. I brought her home and, on Tuesday morning, let Sam and Sadie say good-bye. 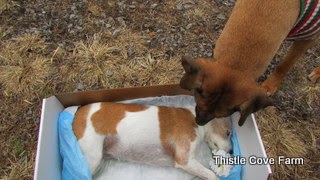 Dave and I have always let the remaining dogs say good-bye; it’s far gentler to let them know than to let them wonder. 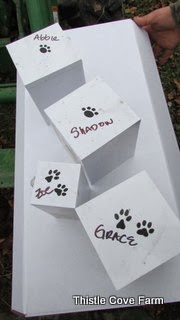 In years past, Shadow, Zoe, Abbie and Grace were cremated so their ashes were put into the grave first, then Sophie’s casket followed. I want to write another post on Sophie but not tonight; tonight is for saying good-bye.


Andy and Donald filled in the grave, 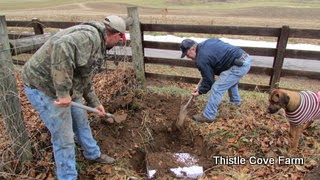 and I used the tractor’s front end loader to pack the earth and finish the job. 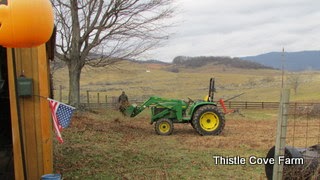 This post is being written on Sunday evening, after a day weekend of rain, cold, wind and more troubles. I’ve been keeping an eye on another old sheep, a weather, who is ancient, probably as old as Carly, and he’s in poor condition. I brought him to the barn, where he’s been given chicken scratch (easy to eat and digest) and sweet feed with pain meds. He’s blind, creaky and confused so, tomorrow, I’m going to ask the vet how best to put him down. He’s had a good great life; better than about seventy percent of the humans on this earth and putting him down will be my last gift.


Now you understand why I’m late with the update; it’s not just the physical exertion but the emotional toll. Sophie’s human Pa had cancer and killed himself and Sophie came to live with me the Sunday after I buried Dave on Wednesday. It’s been an emotional roller coaster for all of us…Sadie, Sam and me and between the weather, the work, the tears and all the rest, I am in tatters.


Dear God. And it’s not even winter.