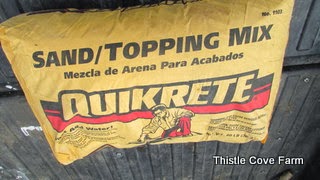 No problem admitting this…I am a boring woman. I tend to stay on the farm, doing things that need doing in order to (right now) put the farm and house to bed for the winter. Today was a good day, mostly, but I am so bummed out. More to come on that later; right now, I’m talking about Quikrete and the places in the limestone foundation that, over the years, have crumbled and fallen out. 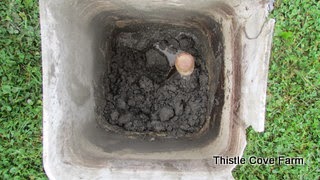 I’ve never used Quikrete before so it’s new to me but, hey, I bake so how hard can it be, right? -grin- Quikrete comes in 40 or 80 pound bags but, of course, the feed store only had 80 pound bags. Oh boy. I’m sure to regret this tomorrow, my shoulders and back are already getting tight and, around here, the only help I have are the dogs and they don’t carry. The “recipe” calls for 80 pounds of Quikrete and 6 quarts of water but there was no way I could make up that much and use it before it hardened. So, I mixed it up, small amounts at a time so I could take a bit longer packing it into the foundation. I haven’t a clue how much Quikrete I used nor how much water I used but I mixed it until it looked ready to use.


Some of the places that needed mortar were huge and I cannot believe it’s taken us me this long to figure out…duh…Quikrete! It’s a fast acting concrete and it can be colored but not by me. Frankly, I think I’m brilliant for having gotten this far. snicker… 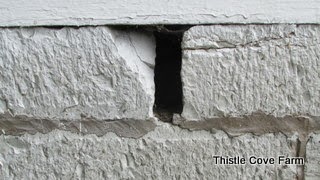 This was the largest place that needed patching and, I’m pretty sure a professional would say, “Um, not such a great job.” Frankly, it looks great to me! It’s already hardened and I’m hopeful it’s going to last a long time. Or, until I sell the farm and move, which ever comes first. It should help with the heating bills this winter…hallelujah! 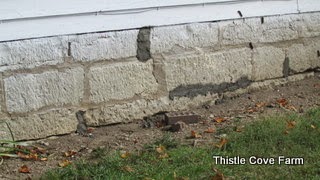 This side of the house is the side that gets the worst weather; it also had the most places to patch. There are a few more places, opposite side of the house, but it can wait until later this week. 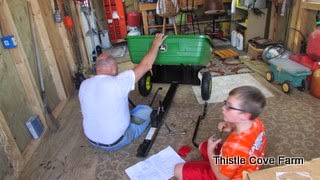 Donald, Mary’s husband, came over Saturday and picked up my lawn mower to sharpen the blades and do some other stuff. Today, he came back, repaired lawn mower on his trailer and, while he was here, he put together my John Deere wagon. This wagon was a fabulous thrift store purchase and now, totally able to be used since Donald put it together. Yay, Donald! 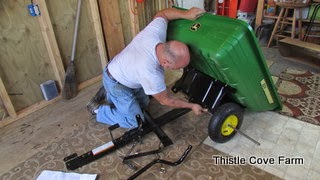 I helped but not enough to brag about. 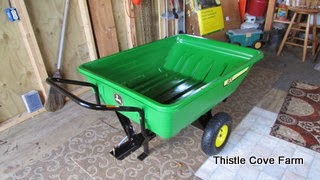 Finished! Doesn’t it look fabulous? It’s heavy and, using the handlebar, can be either pushed or pulled, or attached to a hitched and towed behind my Polaris Ranger or JD lawn mower…suweeet! 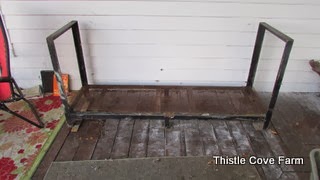 On Saturday, I bought this iron wood rack; paid a whooping $20 for it and think it’ll hold a week to two weeks worth of wood. It’s going to be so nice, having the wood up off the porch! Donald delivered it and we set it on the back porch. Now, to get it filled with wood so I’m ready for the first snow storm. 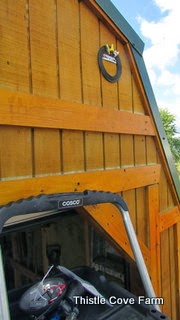 Now for the bummed part…the circle is where my dusk to dawn light used to be. For some reason, it stopped working so was removed and taken to Lowe’s where they said, “Okay, we’ll replace it.” For the record, let me state how much I enjoy dealing with Lowe’s. The staff is almost always helpful, generally knows what they’re doing and, whenever I’ve had to return stuff, they work with me to a satisfactory end. Thanks, Lowe’s! 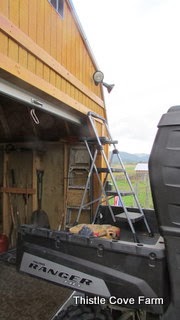 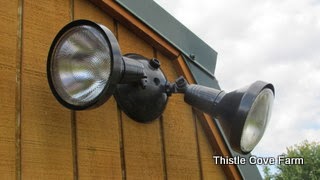 Today, I decided to put up the dusk to dawn light but, having never messed with electricity…too frightened…I made a basic mistake. I didn’t throw the break box so when I touched the black wire…shivver me timbers! It lit up my little world. Fortunately, it was a little light up so I didn’t fall, nor jump, off the ladder. Thank You, God.


I turned off the breaker, connected all the wires…white to white, black to black, ground to ground and screwed the light to the building. I sat on the back porch until dusk, waiting for that dang light to come on but nooooooooo. Didn’t happen. I want to cry. It’s still dark, the light isn’t working and tomorrow, I’m going to try again. Hopefully, it’ll be something simple, like a crimped wire. If not, I haven’t a clue what I’m going to do. I’m boring and bummed out. Totally.

Share
Pin
Email
« Sabbath Keeping
Is Your Congress Rep a Hero or a Putz? »