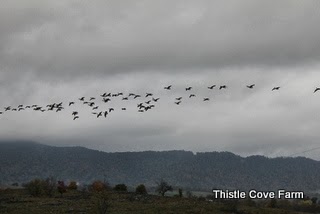 ~ a skein of Canada Geese ~
One day you finally knew
what you had to do, and began,
though the voices around you
kept shouting
their bad advice–
though the whole house
began to tremble
and you felt the old tug
at your ankles.
“Mend my life!”
each voice cried.
But you didn’t stop.
You knew what you had to do,
though the wind pried
with its stiff fingers
at the very foundations,
though their melancholy
was terrible.
It was already late
enough and a wild night,
and the road full of fallen
branches and stones.
But little by little,
as you left their voices behind,
the stars began to burn
through the sheets of clouds,
and there was a new voice
which you slowly
recognized as your own,
that kept you company
as you strode deeper and deeper
into the world,
determined to do
the only thing you could do–
determined to save
the only life you could save.” 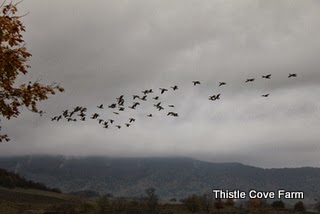 ~ Canada Geese ~
It’s turned frosty here on the farm and this morning rain, cold, drizzle and, just maybe, sleetish mix was added. Yesterday, I took time to check the heating pipes and then, turned the thermostats to 60. This is a big house, with ten foot ceilings and as tight as sieve; I always wanted Dave to put in a gas fireplace in our bedroom but he was afraid of propane gas poisoning. I’d just shake my head and add another layer blanket. I mean, really!, when you can see the curtains blowing, do you really think things are too tight and propane gas poisoning is a potential problem? I have noticed since using Quik Crete to plug the foundation, the wind isn’t making a fuss inside and it’s also a bit quieter…what gifts and blessings! 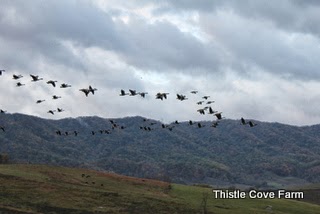 ~ Canada Geese lessons, here ~
It seems most contradictory that in Autumn, when human hearts turn toward hearth and home, the wild cries of Canada Geese are a call to action. They circle the valley, always twice and sometimes more, before landing in the field across the house to glean corn left from last week’s chopping.
Usually, their cries are heard before my eyes spy them, this morning no exception and I made a mad dash for the camera, feet slipping out of bedroom shoes to scurry faster. The dogs crazed with excitement, all of us bunched at the door, then hurtling down the steps across the frosty leaves and grass, dashing across the yard to get the best photo. 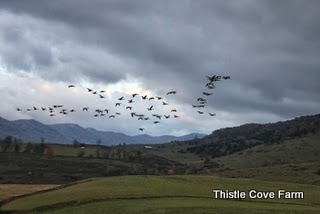 ~ questions and answers, here ~
Flannel night gown flapping around bare legs, naked feet skimming across wet yard, dogs barking loudly and dancing around me, caught up in my excitement as the geese circle, honk, circle, honk. I wonder if these are some of the same geese I waved to in late spring as they flew on their journey and decide, yes, some are old friends. 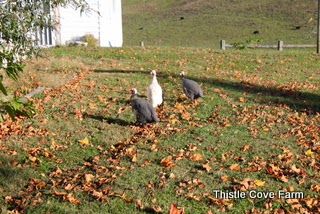 ~ three guinea fowl ~
At some point this summer, we had a violent storm and six guinea fowl blew in; three are left and have made their way from road to barn lot to yard. I’d rather they didn’t visit the porches but have budgeted for food to feed them this winter. Guineas are not only entertaining but they are good watch critters as well and, when disturbed, they’ll call out loudly and readily; listen here to see what I mean.
I always told Dave we had a unicorn flying over the farm; we can’t see it but the lost, wayward and those needing sanctuary and rescue can see it and they make their way here. In case you don’t know, unicorns are the “patron saints” of lost, wayward foundlings. No one can convince me otherwise that unicorns are only mythical creatures. I believe they lived as flesh and blood but were hunted out of existence; remember the Dodo bird? There are many extinct species, see here for the top ten. The Bible, King James Version, mentions unicorns more than half dozen times but scholars say the Biblical unicorn isn’t the unicorn we think of today…a horse with a horn in its forehead. I say, prove it but it cannot be proven and I’m both comfortable and happy in my belief. What does it hurt? Nothing and I cannot understand why people get so riled when someone disagrees with their interpretation…especially when it’s something as simple as unicorns. It’s not as if we’re arguing about salvation!
This day is crazy…the heavy winds are blowing clouds over the valley and within a ten minute period, we’ll have rain and wintery mix and then blue skies and sun. Still, outside chores have to be done and they aren’t getting done with me at the computer.