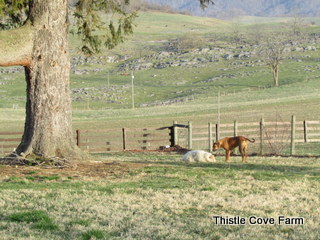 ~ Sadie, checking on Carly ~
“Rest in the LORD, and wait patiently for him:
fret not thyself because of him who prospereth in his way.”
~ Psalms 37:7 ~

“Envy is thin because it bites but never eats.” ~ Spanish proverb ~
“As iron is eaten by rust, so are the envious consumed by envy.” ~ Antisthenes ~
“Envy is the most stupid of vices, for there is no single advantage to be gained
from it.” ~ Honore de Balzac ~
“Envy is the art of counting the other fellow’s blessings instead of your own.”
~ Harold Coffin ~
“You have enemies? Good. That means you’ve stood up for something, sometime in your life.”  ~ Winston Churchill ~

“Pity is for the living, envy is for the dead.” ~ Mark Twain ~
“Whoever envies another confesses his superiority.” ~ Samuel Johnson ~

“Our envy always lasts longer than the happiness of those we envy.”
~ Francois de La Rochefoucauld ~
“Envy slays itself by its own arrows.” ~ proverb ~

“Envy consists in seeing things never in themselves, but only in their relations. If you desire glory, you may envy Napoleon, but Napoleon envied Caesar, Caesar envied Alexander, and Alexander, I daresay, envied Hercules, who never existed.”
~ Bertrand Russell ~

“Envy eats nothing but its own heart.”
~ German proverb ~

“Envy is a symptom of lack of appreciation of our own uniqueness and self worth. Each of us has something to give that no one else has.” ~ Elizabeth O’Connor ~
“You can’t be envious and happy at the same time.” ~ Frank Tyger ~

“Envy shoots at others and wounds itself.”
~ English proverb ~

“It is better to want what you have than to have what you want.” ~ proverb ~
“Envy is an insult to oneself.” ~ Yevgeny Yevtushenko ~

“Let us not be desirous of vain glory,
provoking one another, envying one another.”
~ Galatians 5:26 ~
“For where envying and strife is,
there is confusion and every evil work.”
~ James 3:16 ~
If you’d like a name added to the prayer list, please let me know. Names will be kept for one week, around the world, people are praying.
Prayer Keeping ~ Maxine ~ Kurt ~ Timi and family ~ Susan ~ Sandra ~ persecuted Christians ~
Share
Pin
Email
« Dog and Cat Dairies
Sabbath Keeping »