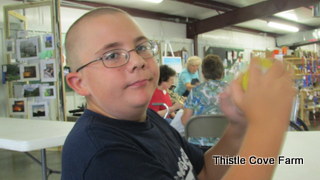 Mary’s children and I were invited to the county fair to demonstrate making butter so Dalton and Kim used a Mason jar and a pint heavy whipping cream with a LOT of shake, shake, shake power. They didn’t understand the entire process was going to take a while so adults took their turn as well. 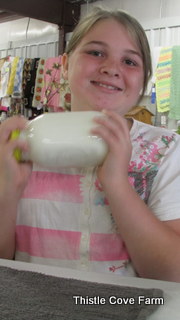 The chilled, heavy duty whipping cream, is poured into a Mason jar and a lid and ring screwed on until just tight. The liquid is shaken until soft peaks form…this is whipped cream and with the addition of a small amount of honey or sugar is just dandy on strawberries or pound cake or strawberries and pound cake…just sayin’, mind.


BTW, a pint of heavy whipping cream will make one half pound of sweet butter. 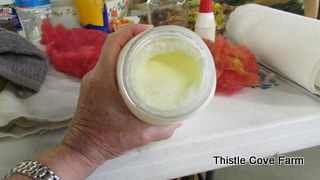 This whipped cream was a trifle sweet to the taste. 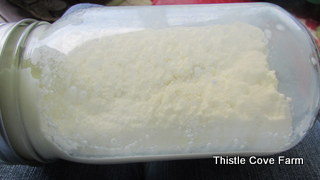 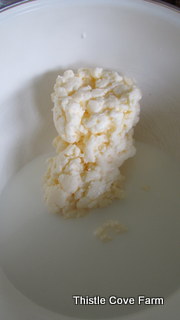 The contents are placed into a bowl and the buttermilk poured off from the butter. I worked the butter just like kneading dough until more buttermilk could be poured off and when the butter didn’t release any more buttermilk, it was ready to be salted. There are those who wash the butter with plain, cold water and then add salt; I do not. I like the taste of strong butter so skip the washing process, add sea salt and then press into my half pound butter mold.


Start to finish, making butter in a Mason jar takes around 30 minutes. I started with cold, heavy whipping cream and it would have been faster had I used cream at room temperature. 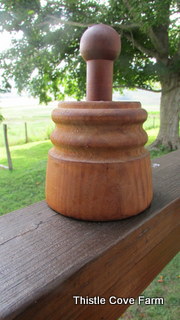 My butter mold and churn were given to me by Aunt Bonnie who also taught me how to churn. She churned all her life and her butter, egg and milk money helped keep together bodies and souls for her six children, husband and herself. 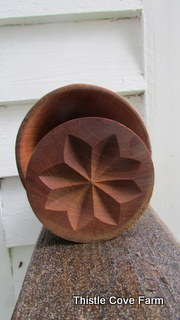 The butter mold is a classic star or daisy pattern but wasn’t used much. Aunt Bonnie would churn a few pounds of butter and hand mold them into rounds about a pound in weight. She lived a hardscrabble Appalachian life and beauty for her was having and preparing the food for family and whoever was there at mealtimes. Manys the time I’ve seen her feed folks she barely knew…simply because there were there at mealtime; no one was ever turned away from the table. 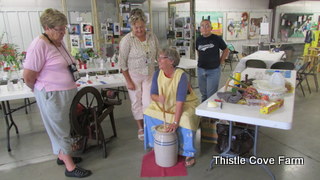 When Dave was alive, I’d churn butter and bake bread; he loved both and I think he loved the idea I could do both. It pleased him, as the memories still please me, to know we were so well matched. He was the high tech geek and I the low tech geek. He was genius material, truly, and was in process of applying to MENSA when he died. We always laughed because he had a Bachelor of Arts from WVU in biology and chemistry and I have a Bachelor of Science from VCU in Recreation, Parks and Tourism. He made bombs, I made baskets, but his dear old Mother wasn’t quite as amused -lol-. 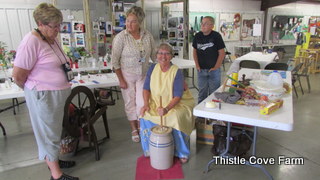 This churn belonged to Aunt Bonnie and she gave it to me when her health no longer permitted her to churn. It’s a vigorous activity and takes some strength, especially when the cream begins to come together. It takes cream to make butter and this is the first time I’ve ever made butter from pasteurized cream; I’ve always used raw milk.


In order to milk a cow, which is a female bovine, she must have had a calf. The calf always gets the first few milkings because these contain the colostrum, very necessary for the calf to both live and thrive and, btw, all female mammals produce colostrum in their first breast milk. Once the calf has milked out, or drank, all the colostrum, the human comes in and begins to take a share. Generally, in the beginning, the calf gets most and as the calf gains weight and grows, the human begins to milk more and more. By the time the calf is weaned, the human is getting all the milk.


Aunt Bonnie would milk her Jersey cows, a breed originally from Jersey Island, and, after straining the milk with a clean cloth, she’d keep the cream from several milkings in the refrigerator. Unless, of course, it was winter and then the milk would be kept in a pail on the back porch. Unless, of course, it was the dead of winter and then she’d keep it in the refrigerator where it wouldn’t freeze. Appalachian winters are COLD! 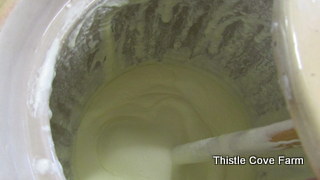 Pasteurized Duchess All Jersey Cream, from Rural Retreat, VA was used in the churn and is unbelievably wonderful! I poured the chilled cream into the churn and within fifteen or twenty minutes, the cream was beginning to set up or thicken into whipping cream…very fast! 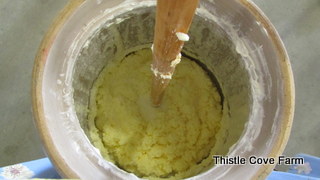 In another few minutes, curds were forming and the butter was beginning to separate from the buttermilk…be still my heart!


Jersey cows have among the best butterfat; it’s around 5% and makes the best…everything! Visit here for a listing of cows, butterfat, protein and a lot more information. Holsteins, those black and white cows, are shysters, they have only 2.5% to 3.5% butterfat..hardly worth bothering!


Here, I’m pouring off more buttermilk, so the butter can be worked into a solid. 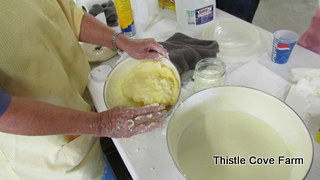 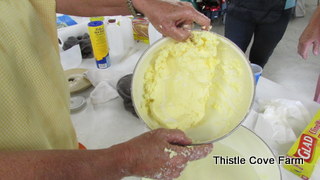 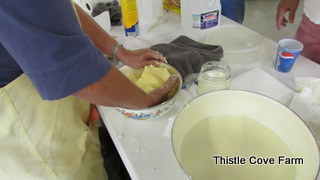 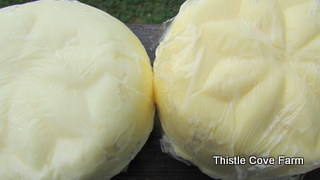 From a gallon and half of sweet Jersey cream, 8 pounds of butter was churned and I brought home a half pound of butter. I also brought home what the children and I shook and they are taking some on vacation next week. In the photo above, the butter on the left is made from the store bought heavy whipping cream; the butter on the right is from Jersey cream…big difference in color and a noticeable difference in flavor.


So, was it worth it? Absolutely! I’m already planning a monthly trip to Rural Retreat to buy my own Jersey cream so I can churn…every month. For me, it’s a sweet activity, one that brings me closer to both Aunt Bonnie, Dave and my Appalachian roots.


In the winter, Aunt Bonnie would put together scrap quilts, using salvaged pieces of cloth and her old sewing machine, tucked into a corner of her bedroom. Over the years, she gave me a quilt, p’raps two, and said, “Now Kid, these don’t go on the wall or in a chest. They go on the bed and are meant to keep you warm, understand? If you’re not going to sleep under it, I’ll give it to someone who needs to be warm.”


Never once did I turn her down and slept under a quilt or two until they had holes. Now, it’s the memories that keep me warm.