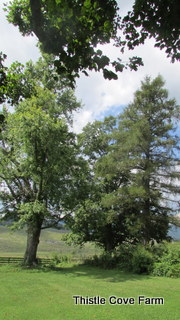 I took a break and had a toes-up on the lawn while the dogs, cats and Carly wandered around me and the yard. There are ancient maple, hemlock, oak and tamarack trees in the yard which provide shelter, shade and color at varying times of the year. While the dogs alternatively gave me sloppy kisses, then trailed the scent of something, I watched the tree branches move lazily against the sky. 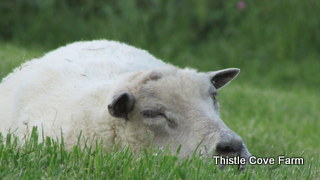 Do trees live in three-quarter time, rooted to the ground and struggling to be free? In days of old, before the Fall, did trees roam the earth, clapping their branches in praise to the Almighty? Are they, now, conscious beings, doomed, or permitted, to live at a slower pace? The Good Book says, “a time to be born and a time to die” but it doesn’t say if all living things are living at the same pace but in their own time, in their own space. 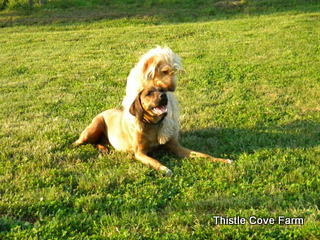 This season of grief, of mourning, since Dave died, leaves me with no one to talk to. No one who looks at me other than strangely when I talk about trees as cognizant beings. 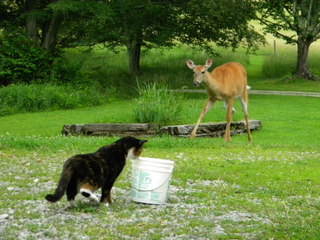 Some years back, Tumbleweed was a rescue, as are so many here on the farm, including Dave and I. He and I rescued each other, a gift of grace from Abba. Tumbles was a birthday gift from Dave; this black American Curly mare who had known harshness, perhaps mistreatment, in her early life. When Dave found out we had to pay for the privilege of rescuing her, he shook his head and muttered, “Only you would pay to rescue.” I brought her home and put her in a small lot where she had fresh water and I could feed and touch her every day. I wanted her to get used to me, to begin to trust me and I, to trust her. 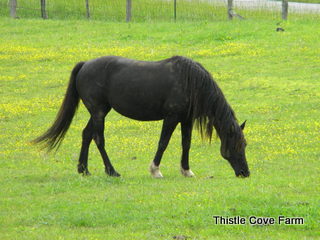 As I was coming or going, she would come to the fence to watch me and nicker a greeting. The dogs and I would go into her lot to give her love and she would patiently stand, letting me brush her. When I started to move away, she blocked my path; she wanted more love and attention. When I told her, “Later”, she would prance off sideways, keeping me in her line of vision and, all of a sudden, would throw her head up and begin racing the small lot, bucking and kicking and watching me watch her antics. Tumbleweed ran for the pure joy of knowing I took joy in watching and she’d run in larger circles around me, but always, watching me, watching. It was a memory moment and a good one; this farm is full of such moments and some threaten to overwhelm, then suffocate.


If you’re still reading, say a prayer for those of us here at Thistle Cove Farm. Especially me…for good health, safety and wisdom to take care of those in my stewardship. For me to prepare us for winter, for me to have the heart to keep going. When Dave first died, I thought the grief would kill me; now I’m afraid it won’t. When Joy, his wife, died, C. S. Lewis wrote in A Grief Observed, “Her absence is the sky and spread over everything.” O dear God, how this strikes me at my core! Lewis also wrote, “When I lay these questions before God I get no answer. But a rather special sort of ‘No answer.’ It is not the locked door. It is more like a silent, certainly not uncompassionate, gaze. As though He shook His head not in refusal but waiving the question. Like, ‘Peace, child;you don’t understand.'” (emphasis mine) 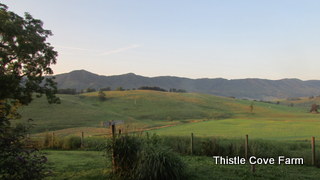 They are both right, I don’t understand and thought I’d be further along by now. When I first met Dave, Cathy had been dead for eleven months. I confess, I remember thinking, “Why does it still hurt you like it does? Why are you still grieving so desperately?”
God, help me, now I understand and, almost, wish I didn’t.


Grief is physical and damn hard work. It’s unrelenting in its assault, a constant daily fight and the only peace I get is when I’m asleep. Thank God, I sleep well due, I’m sure, to the physically demanding work of keeping the house, farm and animals.

It’s a tender work, tenuous at best, living the grief down and trying to move forward. Just last week, a young woman asked, “What’s it like, burying a spouse, the work of grieving?” I told her, “Nothing I’d wish on my worst enemy” and yet, most of us will experience it. Statistics show women are widowed, on an average, at age 52 and more women than men will bury their spouse. Even so, there’s no joy in knowing. 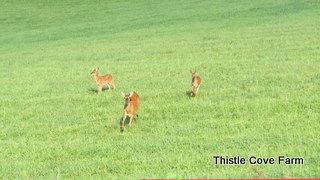 It’s a cycle, this circle of birth, life and death. Once born, everything has a season of life and then death no matter if it’s trees, grass, animals or humans. I’m not sure about the trees and grass but I do know animals and humans grieve; desperately in some cases, and some never, quite, move on. It’s not that they aren’t willing but they aren’t able and only God knows and, right now, He’s not saying other than, perhaps,


Blessings ~ many, but for the life of me, I can’t see through the tears to count them ~