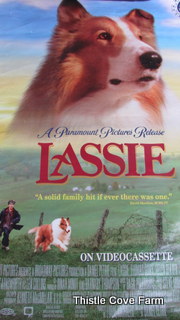 In 1994 the movie LASSIE was released to standing room only crowds in….where, where???? 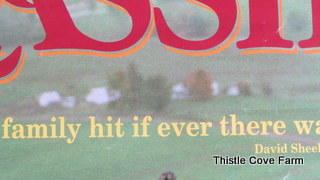 Tazewell, Virginia! More specifically, the Cove area of Tazewell County where, you might remember, Thistle Cove Farm is located. In fact, that’s our farm on the movie poster, in the distance, behind Lassie and the boy.

Ever since Dave and I have lived here, we’ve had people coming by because their kin lived here or they saw Lassie. The man that lived here before us, told us he would walk into a room and see people peering in the windows. They’d bang on the door and ask, “Is this the house where Lassie was filmed?” No, it’s not; that house is a ways up the road, behind a locked gate. Its roof is visible from here and the barn where Lassie jumped out is more fully visible. The scenery is just as breath taking now as then. 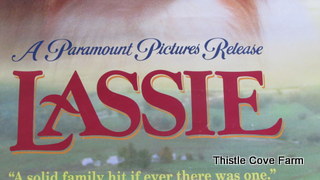 Lassie was filmed in our valley and region in 1995 and was a huge hit. Locals were used as extras and Clinton, my neighbor was the shepherd who worked his dog, Bullet, behind the scenes in order to make Lassie look sharp.


Last Saturday Tom R., from Asheville, NC pulled up in the driveway. He and his two cousins are related to the Whites who lived here during the early to mid 1900’s. I gave them the oral history that had been given me, both right and wrong, and they talked about what they’d been told. Tom pulled a rolled up piece of paper from under his arm and said, “You should have this.” It’s an original movie poster and Thistle Cove Farm is dead center, between LASSIE and the caption, “A solid family hit if ever there was one.”