Neighbor Daddy John is married to Ashley and they have a couple of wonderful children…Little John and Little Miss. Little John is one of those youngins’ that just make me shake my head in wonder. He knows more about farming…and him just going into the second grade…than do a lot of folks who think they know farming. Quick story…the other day, both boys were coming across the mountain when their stock trailer had a flat. Now, you have to know this mountain is a primary road in Virginia but also the last dirt primary road in Virginia! Meaning, there are very few places, if any!, to pull over so one just pulls to the side and hope the oncoming traffic (about six cars a day) can get by. While the boys were taking off the flat so it could be replaced, someone they know pulled up behind them. Daddy John walked back to chin wag, leaving Little John to stand around except Little John didn’t stand around. He shimmed the tire onto the rim, put the lug nuts on, tightened them and said, “Well, that’s done, let’s go home.” Daddy John was flabbergasted; he checked the lug nuts and found them to be tight so everyone climbed into their vehicles and proceeded home.
Now, I find that simply amazing! A six year old boy putting a tire on a rim, etc. Mothers, let me tell you something…this boy will be the man you want for a son-in-law but only one blessed girl is going to claim him! He’s enough to make me wish Dave and I had a daughter, except she’d be too old to be more than Big Sister. ah well… . As to Little Miss, she calls me Sana as she’s still a wee wee one and Sandra is a too big mouthful. She’s a cutie pie and was recently given a child’s snorkel set. I told her, “Oh, I love to snorkel so you and I should go to Sint Maarten and do some snorkeling together.” She looked at me, wide eyed, and Mom Ashley exclaimed, “I’ll go!” 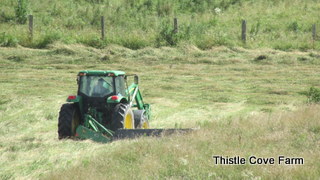 Daddy John cut my hay a couple of weeks ago; he’s such a good man, one of those quiet ones who generally doesn’t say much but when he does, it’s worth hearing. He’s steady too and has a lot of the same qualities I so admired in Dave. Anyway, we had a road meeting (meaning we passed each other in the road, pulled up, stopped and proceeded to have our meeting -smile-) and he said, “Looks like your hay needs to be cut. I’ll be by later today” and he did. In this valley, most of the tractors and equipment are green and yellow; iow, John Deere. “Nothing Runs Like a Deere” and that’s what Dave bought us as well. 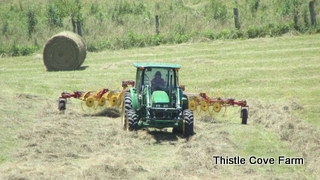 Maybe it was the next day (or day after) he and his Mother came to rake and bale my hay. Mz Em is much like her son…or vice versa…soft voice, quiet manner and, like Daddy John, blessed me greatly by assisting.  In the photo above, she’s racking the hay into smaller rows so Daddy John can bale it. 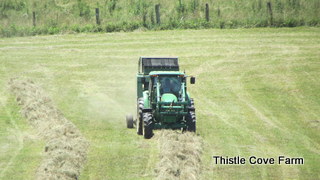 The round baler can be made (can’t remember the correct terminology) to produce the size round bales one needs. Daddy John can make a 4×4 bale or a 5×5 bale and, maybe, smaller and larger bales. He works the controls so the bales he makes for me  can be safely handled by my smaller tractor. (Another blessing!) 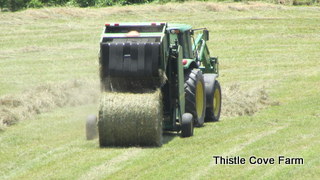 The baler gathers up hay until the controls lets Daddy John know it’s ready to be birthed. He stops the tractor and allows the baler mouth to open and, gently. push out the round bale. It’s am amazing sight and I love watching! 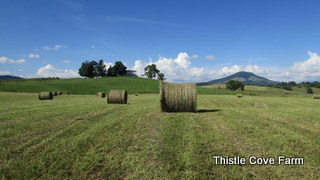 Daddy John baled 30 bales for me…such a blessing…it’s enough hay to sell half and keep  the remainder for my own animals and, God willing, we might get a second cutting in September! This little meadow hay field is the reason this is a farm and not some “grandiose estate”. This eight to ten acre hay meadow means my animals are fed excellent quality hay, put up on this farm with enough hay to sell.  Daddy John and I exchange money for hay; the Good Book says a “work man is worth his hire” and I believe and live by those words and believe Daddy John is blessing me far more than my money is buying. I cannot thank him enough! 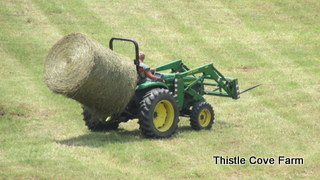 Andy, a young man who helped me for a few weeks, moved all the hay from the meadow to the hay lot. There are those who might think the prettiest sight in all the world is a blue jewelry box but for me, a hay lot, full of sweet smelling, fresh cut hay ranks near the top of my list. Daddy John – God bless you and Mz Em…greatly…for blessing me!