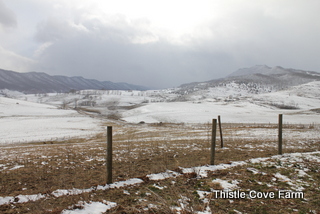 This latest storm hasn’t been fierce but the cold and wind are absolutely bitter. Looking down the valley, the sun is breaking through but only for a few seconds, while the snow is blowing hard but no more accumulation is expected. Fortunately, the sheep have good wool coats, as do the alpacas, and the horses all have shelter. Last night, in the gloaming, I looked out and saw the horses eating hay from last year so I rushed out and set out a new round bale. It’s in a bad location so I’ll have to move it on Monday but, hopefully, it’ll be warmer and not as icy, cold or slick. I always take the safest way when doing farm work! 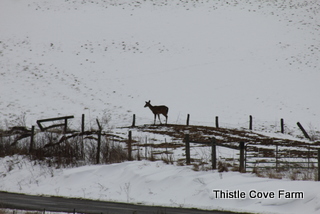 This deer is eating at Daddy John’s silage pit; deer come to feed daily at dawn and dusk and are a pleasure to watch. They drive the dogs crazy but they’re a treat to watch. 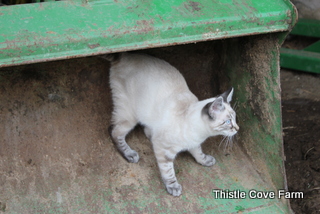 Levi, here on the tractor front end loader, likes to go to the barn when the dogs and I go down to do chores. He’s growing into a fine feller and, right now, is crashed out next to the wood stove. 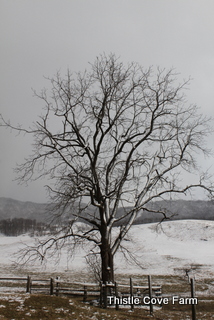 This is my walnut tree and a favorite tree to photograph. There are fewer than half  dozen trees on this farm and, all but one, are 100 years or older. 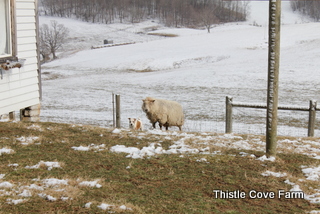 Here, Carly Shetland was just given a treat of bread and Sophie Loren Butterball is looking for a few crumbs. My dogs all think they’re starving but all have extra flesh…yes, you can pinch an inch! Carly is so old, nearest I can figure she’s around 17 or 18, and just about crippled with arthritis. She hobbles along, voice like a fog horn, and orders me around something dreadfully. If I’m not paying enough attention to her, or not giving her a treat, she’ll paw me with her sharp little hooves. It’s nothing for me to have a row of bruises up and down my legs because her sister and their off spring do the exact same thing! 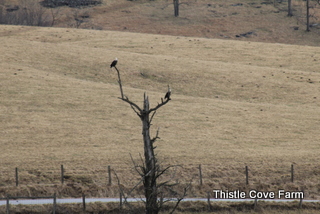 Someone told me eagles were carrion vultures -thanks, Charlotte!- with better press and they’re right. Earlier this week, I saw eagles in my upper pasture and, when I went to investigate they flew into the tree near the road. Buster Brown, one of my oldest sheep, about the same age as Carly, had gone to sleep and never work up. From the looks of things, it’d happened during the night and the eagles arrived that morning to clean up. I called Daniel and he came at lunch and disposed of the body. All my flock is aged, the youngest is approaching ten and I’ll, probably, have one or two more old ones die this winter. People keep telling me to take them to market but I can’t. They’ve been wool sheep all their lives and to truck them to market now is a betrayal on my part; so I won’t. 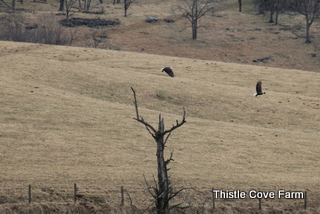 The eagles weren’t too happy when I disturbed them but the feeling was, somewhat, mutual. I don’t blame them for doing their job but, thankfully, Daniel came to help me do my job. Or rather, he came to do my job…he loaded Buster into the front end loader and took him away for burial. 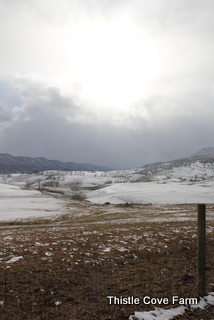 The sun didn’t last long and it’s now snowing so hard the mountains are but a dim outline. It’s frigid cold and when I went outside to take photos, it only took five minutes before my fingers froze and started tingling. Hopefully, the roads will be cleared tomorrow, Kim and I have to go to church and then, she goes home. We’ve had a very lazy day…breakfast, chores, watching Psyche on television, taking a walk to get the mail and then more laziness. Yes, there’s a lot of work we I could be doing but, sometimes, it’s just fun to goof off. Like Dave used to say, “goofing off isn’t any fun unless there’s something else you should be doing.” He’d be proud of me today. smile