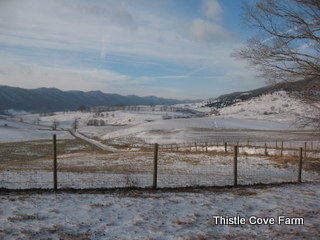 Vicki’s Grow Your Blog Party here; there are giveaways!


Moses had his desert. Abraham had the pagan city of Ur. Joseph had his prison. Esther had her harem. Mary had her pregnancy. Dietrich Bonhoeffer had
his prison.
Dave and I had Thistle Cove Farm.

Where is your hiding place?

Does God have you standing behind a sink of dirty dishes or pails of dirty diapers? Does God have you in a dead end job, working for a boss who is conniving, manipulative or coarse? Are you sitting at the sickbed of your beloved? Where is God hiding you? Are we, daily, ready to do His will, the job He has for you that only you can accomplish? How is He preparing you?


These are questions I ask myself every day. I’ve a good idea of what God wants me to be doing now but haven’t a clue about the future. I know my past has brought me to this place, this time, this farm and God uses it all to prepare me for doing the job He has set before me. 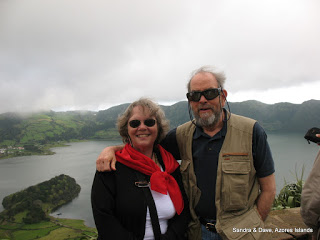 Some of you know, Dave, my husband, died, very suddenly and unexpectedly, in November 2011. He had cancer and we knew his time was short, p’raps six months but were hoping for another year. Our plans were to sit down on a Monday and he’d tell me everything I needed to know to live life without him. We didn’t get a week, God called Dave Home on Saturday.


Thistle Cove Farm was, for both of us, A Hiding Place and for me, over the last year plus, also about the grief. Throughout the years, Dave has been woven in my blog posts to the point it’s difficult to tell which is the man and which is the myth. smile We’d found each other in Richmond, lived next to each other and, after six years, decided to marry each other. His first wife, Cathy, had died of cancer and Dave was a basket case. He was smoking too much and drinking too much but only enough to make him miserable yet not kill himself. 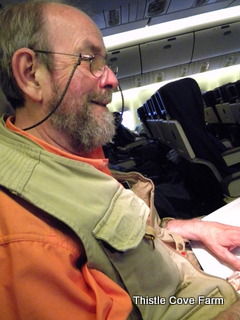 I know God sent Dave and I to each other and then, to this farm. Thistle Cove Farm was our hiding place, where we learned to trust and love, where we grew in our marriage and in our walk with God. Dave didn’t accept Christ until the last few days of his life but he was always searching, seeking and finding Him on this farm. In the morning, Dave’s favorite thing to say was, “This is the day the Lord has made, let us rejoice and be glad in it.” It was always a beautiful start to our day and, whatever happened,we knew God was already there.


Dave and I brought baggage into this marriage and, those first years, it weighed us both down. We struggled to make “us” stronger than “me” even while we had other people living with us. Those first 18 months, two contractors lived with us and, every day, I cleaned for and fed four people. It was exhausting and exhilarating. Even with all our baggage, I knew Dave was a man worth the wait. A man who would grieve so heavily and so long for his first wife, was worthy of his namesake, David. Very soon after meeting him, I knew I’d have gone to hell to fetch him; as it was, I only had to go to the gates and wait. I feel his presence and his absence each and every day. Never am I unaware he’s gone. Never does the black hole readjust to allow his space to be overtaken. Never is a long time.


And, so it is with marriage. It took Dave and I a long while to trust each other, fully and completely. While I was the first to say, “If you want to leave, then leave now but if not, never bring it up again.” Almost always, Dave was the first to say, “I’m sorry, let’s not argue, life is too short.” It took time for my fear to subside and for me to trust with my heart. Too much with too many had paved my heart path with shattered glass.

I had to learn trust before I could accept cherish. 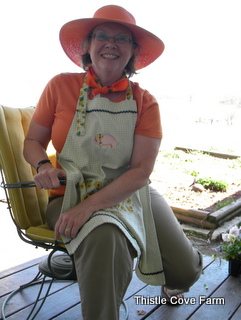 In order for me to stand in the light of Dave’s love, the shadows had to be dispersed. In my case, there didn’t need be shadows to prove the light. I had to, willing and freely, cut  open my heart to allow trust and love to grow. That’s what I did with Dave; that’s what I’m doing with God. It was within my power to change my marriage because it was within my power to change myself; to allow God to change me I, freely and willingly, cut open my heart again.

Linking with Jen at Finding Heaven Today and the Soli Deo Gloria Party.