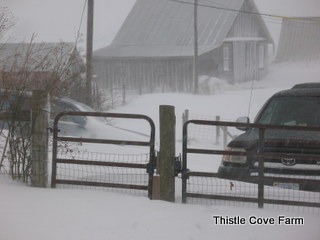 Hurricane Sandy has come and gone, leaving not only a total mess, but loss of life, both human and animal, total destruction of property, broken hearts and lives. On the farm, there are drifts of three to four feet and about two feet of snow. The wind has been blowing steadily so most of the snow is gone, leaving the sheep to graze the yard. In the meantime, due to snow drifts, I can’t get out of the yard gate, making it difficult to get to the barn to feed animals. Mary, my friend in Burkes Garden, had snow drifts of twenty feet and Donald, her husband, spent the better part of an hour trying to extricate himself from a twelve foot drift. He’d gone out to feed their animals, fell into a drift and it was only when Scout, their gelding, allowed Donald to grab hold of his tail, was Donald able to pull himself out. Mary said she thought Donald had gone to his workshop but when he got to the house, he was shivering and his teeth were chattering. Dangerous! 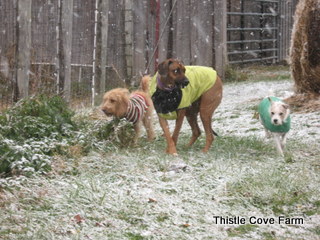 Sam, Sadie and Sophie enjoy the snow, once they don their sweaters and coats. At first, they resisted but now, they come when I sit down in the mudroom and wait patiently as I deal with sweaters, snaps, zippers and velcro. 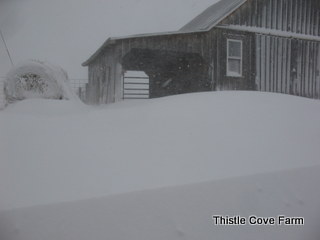 Drifts were brutal to plow through; generally, the dogs let me break a trail and then would follow…smart dogs, eh? smile 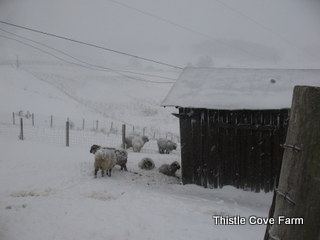 The sheep love this weather, at least the younger ones love this weather. The older ones just put one foot in front of the other and keep going. Right now, the sheep are in the yard and will go back in the pasture later today. Most of them are so old and have earned their right to die on this farm. Dave and I always had loyalty issues; if something came here, we wanted it to die here. That’s one reason he and I were so good together; we knew we always had each other’s back…come what may. 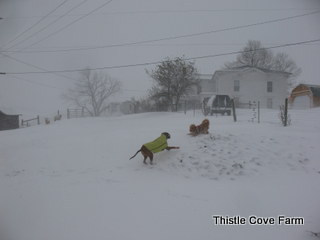 The monkeys love this weather as long as they’re dressed for it. Me too. 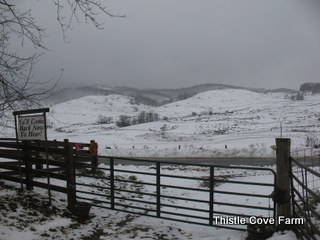 The electricity has been off for half a day and now, mostly on. Bless Dave’s memory, he had a house generator put in so we’d always have heat, lights, could cook on the stove top, televisions and computer. He was my provider and protector and still blesses my life.
Fred, my lawyer, now calls me Hurricane Sandy and calls me cold and mean. Fred is one of the few who can get away with such foolishness; he’s been a rock since Dave died.
But please, I just want to be called Sandra! smile.