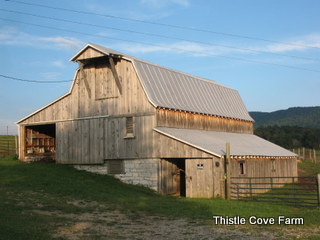 Behind the stables is a livestock water trough that, fairly often, gets an air lock. The upper left end is where the John Deere is stored, the hay loft is top middle and the lower right is where the Ranger lives next to the tack room. But I digress. 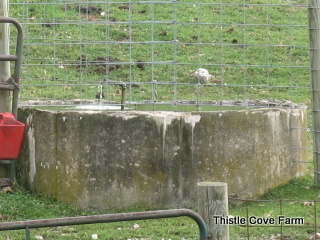 So, I drag out my cut off broom handle, wrapped with black electricians tape and chunka, chunka, chunka the water overflow pipe until the air lock bursts loose and water flows freely again. This particular trough feeds two other troughs so it’s vital it works at all times. 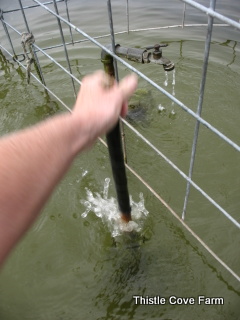 Cattle, horses, sheep, cats and various wildlife are dependent upon this water. 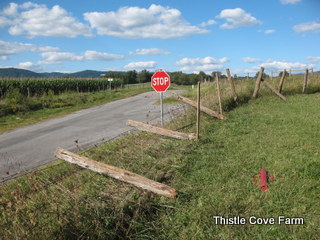 If you don’t know, calves are the closest thing on four legs to teenage boys I’ve ever seen in my life! I swear, if they could talk, all you’d hear is, “HEY! Watch this!” Some of my fences are in terrific condition and others…hmmmm, not so much. Especially now. The Boys, as they are mostly called around here, decided it would be fun to see how many fence posts they could break. Then one calf decided it would be fun to go over the fence, down the bank, out into the road and na na na na na his friends who stood watching. Thank God, all of them didn’t decide to do likewise; it was hard enough dealing with one escape artist. 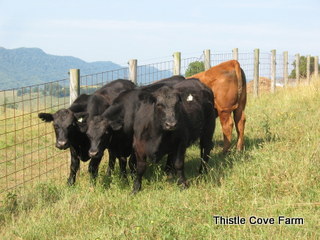 While I’m using the car to maneuver the calf back down the road, an older gentleman comes up the road. I’m waving him…go to the right, go to the right! when he pulls up and stops. “Do you need any help?”
Wellllll. Yes. But. This feller looks to be in his mid 70’s, perhaps older…? So, I’m torn between saying yes, and praying he won’t keel over of a heart attack, or saying no and him thinking I’m an ingrate. As I’ve heard all my life.
So, I say yes and I head to the driveway so I can open the gate so the calf can, hopefully, be persuaded to go into the barn lot. In the meantime, I also walk to the upper pasture and call the others….“HERE BOYS, COME HERE BOYS. MOOOOOO BOYS!” Oh yeah, it’s a sight. You and a camera could be contenders for American’s Funniest Videos $10K prize should you film this!
Eventually, all is well…the small herd of calves head to the barn, Daddy John -as I now call him because he has a son named John, then there’s John C. and John M. all in the valley and it’s getting confusing. So Daddy John is headed up the road on his John Deere which, as almost everyone knows yellow and green are the only colors decent tractors come in, and he herds the calf back to the barn lot. No mean task because the dratted calf has decided to go down the road while his buddies follow alongside the fence. “HEY!” they call out. “We want to come with you!” Meanwhile, the dratted calf is bellowing, “But I want to be with you guys!”
Why do I have cattle? 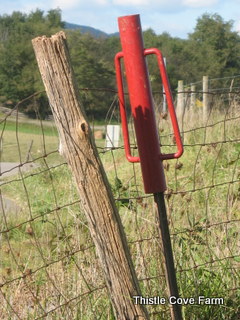 I take a pile of metal T posts, my post driver and the dogs and I head to the pasture. It takes a while but I’m able to jury rig the fence so the cattle will stay in. Right. As long as they don’t decide to go through the fence again, they’ll stay in. 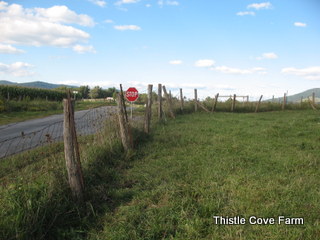 See. As they say around here…good enough for gubmint work!
There’s plenty more going on around the farm but I’m too busy, just now, to sit at the computer very long. This morning, the temperature was 46 degrees F so Autumn is on her way and in a hurry. There are still are few hummingbirds hanging around but I trust them to know their business, when this feeder is empty, almost empty now, it won’t be re-filled.
My good news…as I’m going around the farm doing chores, as God brings your name to mind, you’re tucked into prayer. Doesn’t that sound wonderful!? It does to me too! smile