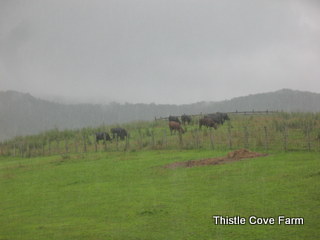 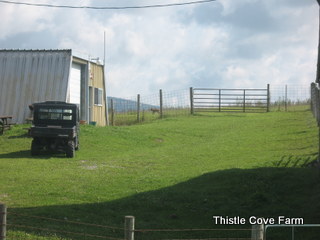 It’s difficult to tell but that small reddish spot between the second and third fence posts to the left of the gate is Mama Fox. Now I know what all the yelping is about; Mama Fox has kits and they are hungry so she’s been feeding them kittens. Mother Nature and Father Time take care of us all…eventually and in one way or the other.
Then, I head down the road to a neighbor’s house to pick up a table to use in the little town festival tomorrow. Ziggy, their ten month old Great Dane comes BOUNDING to greet meet and I…dumb, dumb, dumb…call out, “Hi Ziggy; whatcha doing Beautiful?” Well. Ziggy goes crazy with joy and begins leaping and running and cavorting around and…this is the “bad” part…crashing into me, over and over and over…Now I’ve started to yell, “NO ZIGGY, DOWN ZIGGY, OFF ZIGGY” and Ziggy is SO happy because here’s a New Human AND she knows MY name! OH THE JOY!!! At Ziggy’s last pass at me, and before I dash to the house, I put up my hands to, hopefully, try and keep her from slamming into me and knocking me into the ground and…and… I’m not quite sure what happened next. See Monday’s note about falling…
Either I “put” my hand into Ziggy’s mouth or Ziggy “puts” her tooth into my hand…either way, I’ve got a puncture wound in the pad of my right hand. Ziggy is such a puppy, albeit a huge puppy and her first humans got her and then didn’t want her because, “Gosh, we had no idea she’d get to be so big!”
Trust me, you can’t think or say anything I’ve not already thought or said! Some humans simply make you wonder if they’re worth their salt!
Anyway, Ashley, good soul that she is, rescued Ziggy and, when Ziggy quietens down a trifle, she’s going to be a fabulous dog! She’s already a beauty and just needs some more TLC and training. I know this because Sadie is just like her only not quite as big. Perhaps I could start working with them both to give teach them some manners…?
A half bottle of peroxide later, I’m, almost good as new. It’s only when I get to the AAA office they ask, “Why are you so filthy and why is there blood running down your arm?” OOPS! Ziggy clipped me and I missed it. Laura said, “I think Dave is trying to tell you to slow down.” I looked at her and said, “That’s easy for him to say!” We all laugh.
I’m almost finished and so is my week…are you still with me?
Now, it’s late afternoon, I’m exhausted, the dogs need to be let out and fed and I’m headed down the valley when…the dang gas light comes on. I’m almost out of gasoline! So, I turn around, windshield wipers beating time get that reference? and head back to the convenience store and gas tanks. I lift the nozzle and…my freshwater pearl bracelet snags, breaks and pearls roll everywhere! While the gas is going into the tank and the rain is pounding down, I drop to my knees and start gathering up my pearls.
No, as it happens, this is not a good time to recall the Bible verse…pearls before swine!
Did I mention I’m exhausted? Tomorrow is a little town festival and I’m going to sell raffle tickets for a VA Tech fleece throw I made. All money is going to our volunteer fire department but I’ve already said, if it’s raining, I’m not going.
We’ve had rain every day for two weeks and you know what?
I’m praying for rain tomorrow!