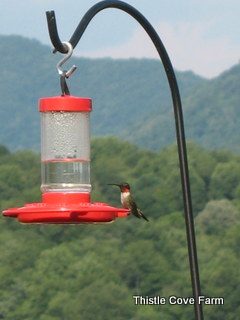 In the summer I use a lot more sugar than any other time of the year. It’s canning season and it’s humming bird season; those little friends can suck through some sugar water! The high count for the two feeders that are close to the back porch, is twelve. That’s right, a dozen humming birds fighting over two feeders! Still, it doesn’t match Aunt Esther’s count of thirty-six…36! Of course, she had half dozen feeders and some of those were plastic liter bottles. Humming birds loved Aunt Esther! 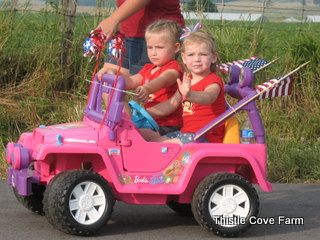 These two little misses were at the parade Tuesday night. Things went swimmingly until the driver became enthralled waving at her adoring public. The passenger kept one hand on the windshield, the other hand near the steering wheel and both eyes on the road. When, seconds later, the driver began driving toward the side of the road, the passenger screamed, grabbed the wheel and began straightening the vehicle. The driver, thoroughly miffed, turned to scream at the passenger, whereby the passenger raised her hand to slap the driver. OH THE DRAMA! Mom, walking beside them, stepped into the melee and got both girls straightened and, for the moment, peace reigned. Perhaps the disagreement began over which young miss could be the driver…I don’t really know. 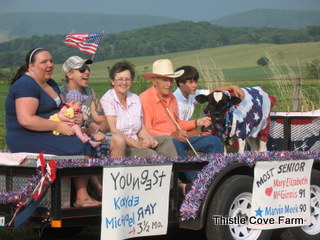 One of my favorite floats…the youngest resident of the garden is three and a half months while the oldest is a woman ninety-one years old. Please note the calf, draped in red, white and blue bunting…big city parades got nothing on us, I’m here to say…proudly! 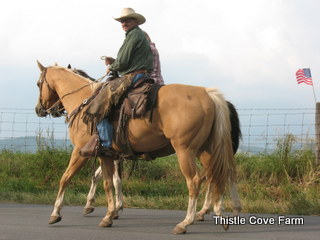 These were the only two horse riders in the parade and that’s a mighty fine palomino gelding the gent is riding. For those who don’t know a gelding is a cut, or castrated male horse. 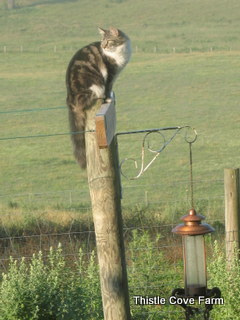 Miss Gypsy Rose Lee is the climbingest cat I’ve ever known! In the mornings, she goes to the barn with the dogs and I; we do barn chores and then back to the house. She’ll climb fence posts, into barn windows and this is the clothes line with bird feeder attached. I don’t feed birds in the summer months; there’s plenty of forage for them. I do feed in the winter months, starting about November, or earlier, if the weather is bad.
I would dearly love to play around on the computer the rest of this H.O.T. day but lime pickles await as does shredding zucchini for the freezer. I love making zucchini bread in the winter time and with cream cheese it makes either a dandy breakfast or a fine snack. Keeping two cups in baggies means I’ve always got just enough for a couple loaves of bread.
I’ve been canning for forty-six years and started by making jelly out of what we called fox grapes. I’m not sure what variety grapes they were but do remember they were large and white in the height of summer. They made delicious jelly!
Gosh…almost forgot…the radio broadcast yesterday isn’t going to be put on-line on their site. They are sending me a copy and I’ll either figure out -haha- or get someone to help me put it on my blog…IF I have bandwidth…rural areas and bandwidth don’t go together.
So, I’m in process of putting my hard won earned information into a book. No, I’m not being morbid but there’s SO much one can do to prepare for the death of a loved one. Even if that loved one is you -wry smile-. Come on…do you really want the government to step in and decide where your children are going to live…think foster home!… or take a huge piece of your hard earned money or belongings? There are legal ways to take care of your affairs and some of these legal ways don’t cost you a dime…not now, not later!
You have my permission to keep me on focus; please ask, every so often, “How’s the book coming along?” Unless things change, it’s going to be an e-book and at an affordable price. As the Good Book says, “a workman work woman is worth his her hire” and, yes, I’ll have to charge for my labor.
Is there anything in particular you’d like me to include?
In the meantime, please pray for me…I need help on the farm because there are chores I’m simply not strong enough, smart enough or have the equipment to handle. I also need wisdom to make intelligent choices regarding my affairs and I need strength to do the work God has placed before me.
God bless you and thank you for visiting Thistle Cove Farm today.