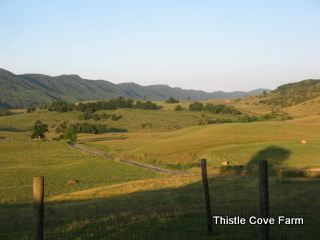 Mercy! Is it hot where you live? It’s h.o.t. here and makes anything take longer, I use more energy, drink more water and even naps aren’t all that interesting. Did I mention it’s HOT? I’m getting up around 5 or 5:30 so I can feed the kitten, get treats for the dogs, read my Bible, sometimes listen to preaching but, more than likely, go to the pastures so I can chop thistles in the cool of the day. Dave used pesticides but I’m not a big fan. As a matter of fact, they frighten me no matter what I’m told. When Dave would call me a cynic, I’d tell him, “a cynic is a realist with more information.” He’d laugh but, I don’t know, I’m willing to be wrong but doesn’t it seem like there’s a huge increase in life threatening illness of all kinds? What’s the connection? Is there a connection?


Anyway, I take a hoe and the dogs, go to the pastures and start chopping thistles. My attitude is, it’s good exercise, I’m getting rid of thistles and working out anxiety. It’s all a good thing.


I’ll chop thistles for an hour, perhaps a bit more, before coming to the house to eat breakfast. Then, it’s computer time, working on the estate, making telephone calls and doing desk work. Last month, I had a computer outage and can’t access my photos so, on the agenda this week is, hopefully, getting the desk computer up and running. 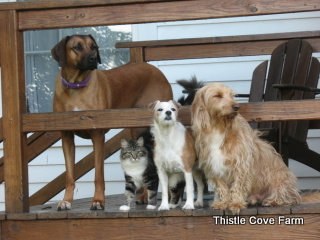 Some of the dogs and, sometimes, Gypsy sit on the sun room porch and sniff the air. I’d love to know what they smell, at least, I think I’d love to know. Two nights ago, the coyotes were closer than they have ever been; even the neighbors said they were concerned. We’re not sure what the coyotes were doing, it sounded dreadful and imagination doesn’t bear working.


I hope you’re staying cool, not getting overheated; it sure seems like summer is early this year. Summer solstice is today, and it is a day early because of 2012 being Leap Year. The North Pole is tipped more toward the sun than at any other day during the year, it’s the exact opposite in the Southern Hemisphere. This means there’s more sunlight today than any other day, making it the longest day.


What makes it the saddest day, for me anyway, is this is the longest day with the most sun. That means tomorrow we start losing daylight. Anyone else feel the same way?


“Summer afternoon, summer afternoon. To me, those have always been the two most beautiful words in the English language,” so said Henry James. Although American and born in New York City, James settled in England and became an English subject where, I suppose, those shorter English summers were more greatly favored. Had James spent a summer in the South, he might have revised his opinion.


There’s a proverb that says, “Summer friends will melt away like summer snows, but winter friends are friends forever.” Ah, there’s more truth in that statement. My mother used to say if a person could count their friends on one hand, they were blessed. She’s right. If you’ve got folks you can call at 3 a.m., folks who’ll answer the phone and either listen or come over, you’re blessed indeed. How many such people do you have in your life? Not enough, I’m willing to bet; none of us have too many of those kinds of friends.