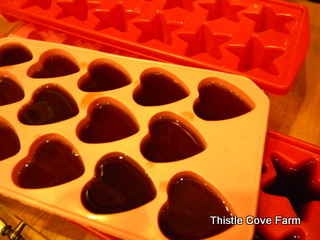 Joining Ann Kroeker for Food Fridays…
Some may remember when I posted about making iced coffee and using coffee cubes. I dislike waste, although am as guilty as the next, but one way I found of being thrifty is making coffee cubes from left over coffee. Dave was a coffee drinker…make that a Coffee Drinker! He loved the stuff and would drink a pot, or more, every day. Invariably, there would always be a bit left over and I hated pouring it down the drain or on the ground. So, when I found these cute little ice cube trays on sale for, maybe fifty cents, I would pour the coffee into the trays, set them in the freezer and a while later, iced coffee! Generally, I use decaff coffee to make my iced coffee as I don’t want, or need,   the extra caffeine? I like to sleep at night! -smile- 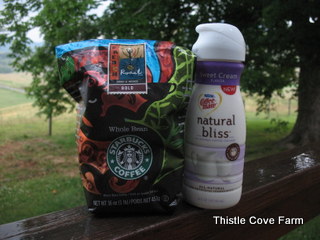 Do you like flavored coffee? For me, it’s the best and easiest way to drink coffee. The Starbucks in the photo is a bag of coffee beans someone gave us. I save these beans for when they come to visit as it’s a French Roast and much too strong for my stomach. I also like flavored cream but stopped drinking it when I, finally, got around to reading the ingredients. My motto is, if I can’t pronounce it, I’m not sure I want to drink or eat it. Nestle got smart and now sells “Natural Bliss”; it’s milk, cream, sugar, flavoring. I know some will decry the use of sugar but ,as little sugar as I use, I don’t think it hurts.


Just recently, someone asked for a recipe but I’m one of those people who use a recipe only as a suggestion. In other words, I usually wing it. Hey, I’ve got five…count ’em…FIVE dogs and there are no mistakes in the kitchen; only happy accidents! So, my “recipe” for iced coffee is make a twelve cup pot of decaff coffee, let it cool and pour in a bottle of Natural Bliss creamer. Put some coffee cubes in a tall glass, pour the coffee over the cubes and enjoy. For once in life, it’s easy and simple! Plus delicious smile. Sometimes I’ll even eat store bought cookies…gasp! LOL

Yesterday morning I received a telephone call from Ashley; she’s the wife of our Assistant Fire Chief. An up the valley neighbor’s house was on fire, could I go? Yes, of course, although I was filthy from hoeing thistles, chasing calves and doing general farm work. All this, mind, before 11 in the morning! 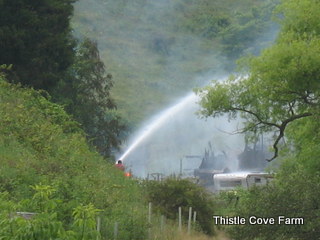 ~ tamping down the flames ~
Mrs. Webb, her sixty year old daughter and a grand-daughter were sitting on the front porch when Mrs. Webb thought she smelled smoke. She went into the house to investigate and saw smoke coming from the second floor. She hustled her daughter off the porch and, in short order, firemen had responded to the call. Folks, this was a SIX ALARM FIRE! As you can see, it’s a total loss; Mrs. Webb and her daughter got out with the clothes on their backs. Mrs. Webb didn’t have time to grab her insulin medication or anything else and the daughter is special needs, mentally retarded. Mr. Webb, the father and husband, passed away earlier this year. 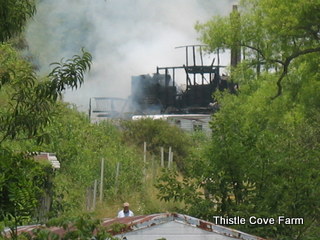 ~ near the end ~
The Red Cross will put them up for three days, not the five days as I originally thought, and will give them a clothing allowance. Once again, the community is pulling together to give assistance in the form of household goods, clothing, food and finding shelter. Our local television station, about 35 miles away but local for us smile, is WVVA and they did a story on the fire. If you click on the link and look for “fire destroys a Tazewell County home” you’ll see the interview. The Bluefield Daily Telegraph‘s reporter, Greg Jordan, did an excellent story and impressed me a great deal and then he called me twice last night to fact check! Now, there’s a reporter who knows his business! If you read his report, you’ll get more information and a better idea of what this family is up against.

Generally, I handle traffic and, since I’m in the road anyway, stop drivers, tell them a short version of what’s happening and ask for a donation. Yesterday, people gave over $200 and that will be delivered today, when I go to town for errands. People are kind and want to help; asking them for specific help gives them a purpose and helps those in need.

I’m so proud of our community! Ms. Shepherd, at the nearest convenience store, gave cases of bottled water so our firemen could quench their enormous thirst. Daniel Ingram, owner of Stanley Steemer, bought extra water for the same purpose; donations are being accepted at Crab Orchard Vet on Main Street. People rallied knowing “…to whom much is given, much is required…”. Like Mother Teresa said, “if you can’t feed a hundred, feed one.” Don’t allow yourself to become overwhelmed like me sometimes of the enormous needs of people. Focus on doing what you can do for the one before you and don’t forget to ask God’s blessings on the work of your hands and heart. Our Father hears the prayers of a righteous woman and man and if you’ve accepted His Son as your Savior, you’re a righteous woman.